I Single-handedly Built The Most Popular Statue In Enugu, Without The Help Of The Government - Man

Some people are very talented, that they can use their talents to work for their community. Many people have done it, it is not a new thing. Some people use their resources and money to do work for their community without waiting for the government to do it for them. They do these things with their free will. A man known as Christopher Afuba has narrated how he single-handedly built the most popular statue in Enugu state. 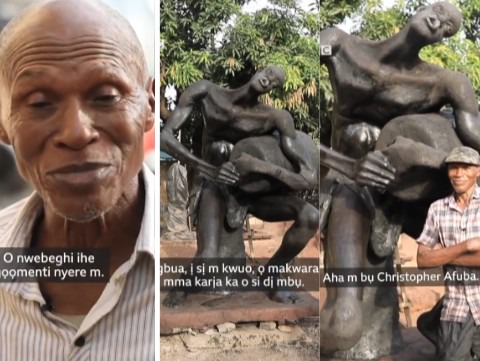 According to him, he said that he did the work alone without anyone's assistance, not even from the government of the state. He said that everything that was spent in doing the sculpture was from him. He did it and mounted it in a place where everyone can see it. After completing it, everyone liked it, and it became the most popular sculpture in Enugu state. He named the sculpture "Oti igba" and it brought the name of the junction which the sculpture was mounted, people started calling the name of the junction "Oti igba junction.

He said that he was at home when some people told him that "Oti igba" has been destroyed by EndSars protesters. Then he asked what concerns EndSars protest with "Oti igba"? I guess that was after the Lekki toll gate massacre when hoodlums started destroying things in Nigeria, that's when "Oti igba" was destroyed. The hand, the drum and the head of the sculpture was cut off and destroyed by hoodlums then.

People were like, the person that created "Oti igba" is still alive, let's go consult him so that he can fix it up. He was consulted, and he agreed to fix it up again. "Oti igba" later stood still again, watch video here. What's your view to this? Like, share and follow me up

Successful Marriage Is For Matured Adults Not Kids