By Divinegrace10 (self media writer) | 27 days ago

Ancient Egypt is history. Its temples and pyramids are praised for its perfection. Today we want to review what, in our opinion, could be the 5 most beautiful temples of this beautiful land of the Nile. 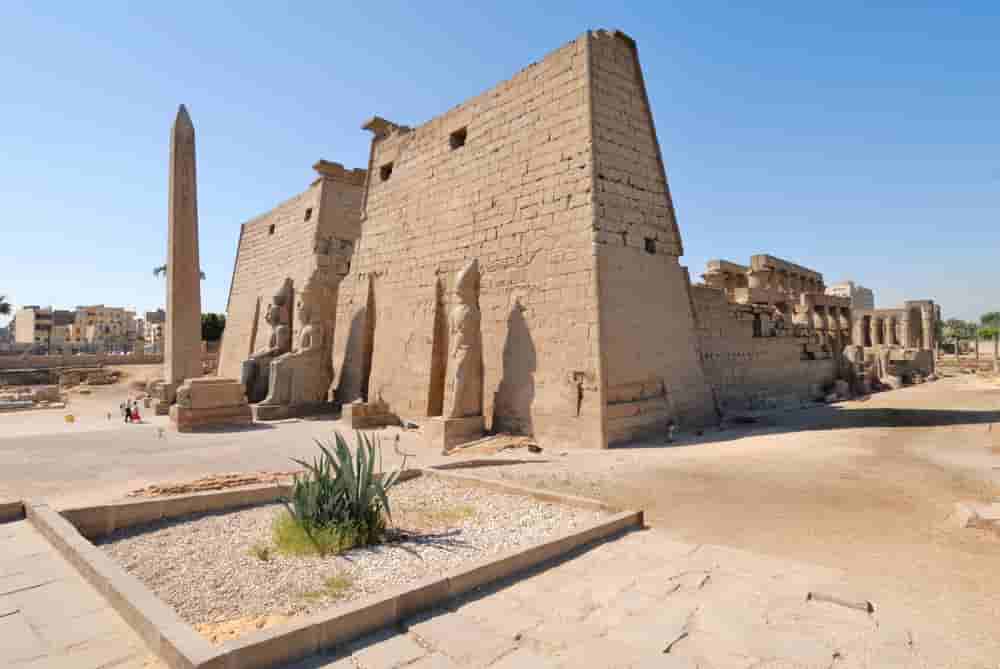 It is perhaps one of the most famous. Located on the banks of the Nile, in what would be the ancient city of Thebes, it would be built in 1,400 BC, coinciding with the New Kingdom.

Its majestic proportions are dedicated to Amun, god of the wind. In addition, the temple was connected to the Karnak temple along a route in which some 600 sphinxes marked our route.

Currently, unfortunately, you can only see the beginning of this huge avenue at the entrance doors of each temple. However, it is still just as impressive.

Next to the right leg of the impressive seated statues of Ramses II, Queen Nefertari was depicted dressed as the goddess Hathor.

This is one of the many signs present in luxor temple that show us the close connection that the ancient Egyptians established between their rulers and their gods ,

An association that turned out to be the basis of political power in Egypt.

Many other inscriptions reflect this sacred condition attributed to the Egyptian pharaohs.

On the west side of the temple, which is accessed from the hypostyle hall, is the birth room ,

Decorated with reliefs that narrate the conception, pregnancy and divine birth of Amenhotep III, the result of the union of the god Amun with his Mutemwiya mother.

Also from the hypostyle hall is that the offerings room is reached, which is decorated with religious images in honor of Amun and Min.

The sanctuary, another of the enclosures with access to the hall, was built by Amenhotep III.

Dedicated to Amun, the temple of Luxor was strongly related to the temple of Amun in Karnak , four kilometers away, on which it depended.

Its main function was that of the destination of the procession that every year, during the Opet festival, originated in the Karnak temple, which Amun abandoned to walk through the avenue of the Sphinxes.

This procession of the sacred boats is immortalized in the reliefs of the outer walls, which represent the journey to Luxor and the return.

In the center of the main courtyard, the three chapels built by Hatshepsut and Thutmose III were subsequently decorated by Ramses.

Dedicated to Amun, Mut and khonsu, they served as a storehouse for sacred boats. 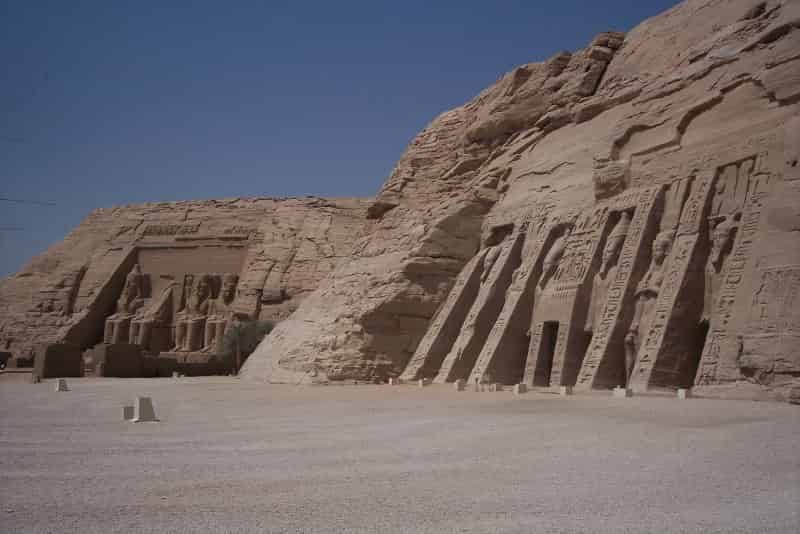 Abu Simbel Temples were carved, virtuously, on the side of the mountain.

It would be approximately in the thirteenth century BC, with the reign of Pharaoh Ramses the Great, when this monarch decided to build them in honor of his own person and his queen Nefertari.

The construction of these temples would take approximately 20 years.

Over the centuries, it would be buried by sand, these being partially discovered in 1813 and completely in 1817.

Abu Simbel Temple complex is one of the most impressive architectural wonders of Egypt.

Its superb walls and statues of immense proportions give way to halls inhabited by mysticism that only the ancient Egyptian religion is capable of creating.

It was part of a political strategy to regain the prestige that ancient Egypt had lost abroad after religious conflicts that basically consisted in the transfer of the cult of Amun to the cult of Aten.

Political life had been consistently disrupted during the reign of Akhenaten.

Having won several battles, Ramses II planned the building of his own temple, which would house the cult of the three most revered gods in Egypt: Amun, Ra and Ptah, showing Ramses II himself as the fourth great god of Egypt.

Also, a smaller temple was erected in honor of his favorite wife, Nefertari, who would incarnate Hathor, goddess of love and beauty.

As a result of the construction of the Aswan Dam and the increase in the level of the Nile that it caused, several temples in the region – on the river bank – were suddenly in danger.

The temple of Ramses II and the Temple of Nefertari were among these monuments, which had to be moved between 1964 and 1968.

The operation consisted of sectioning the temples into large blocks, and then relocating them in a safe place. A leading international team was in charge of the execution.

As a result of this procedure, the Abu Simbel temples are now located in an area close to their original position, 65 meters higher and 200 meters farther from the water. 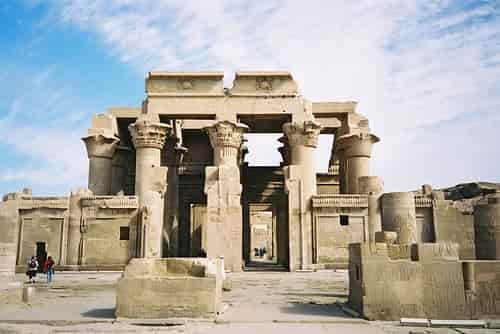 This beautiful temple is situated on a very high dune overlooking the Nile.

It is another of the great temples of Egypt, marking itself as an unusual double temple, built in the Ptolemaic dynasty.

The temple, being actually two in one, has two entrances, two hypostyle rooms and two sanctuaries, among others.

Inside we can see elements as interesting as crocodile mummies.

Approximately forty kilometers north of Aswan and a few meters from the bank of the Nile, on the east bank, the temple of Kom Ombo stands, highlighted on a small mound of stone and sand.

Not only its supreme Ptolemaic architecture is outstanding, also the myths that were woven around its construction, and its destruction.

The Temple of Kom Ombo was built during the reign of Ptolemy VI Philometor, and is the only double temple in Ancient Egypt.

The left side dedicated to the triad of Sobek, the crocodile god; and the right sector, in honor of the triad of his brother Horus, the falcon god.

Sobek, the embodiment of evil, was divinized by the abundance of crocodiles that inhabited that area of ​​the Nile.

In return, half of the temple was dedicated to his benevolent brother. 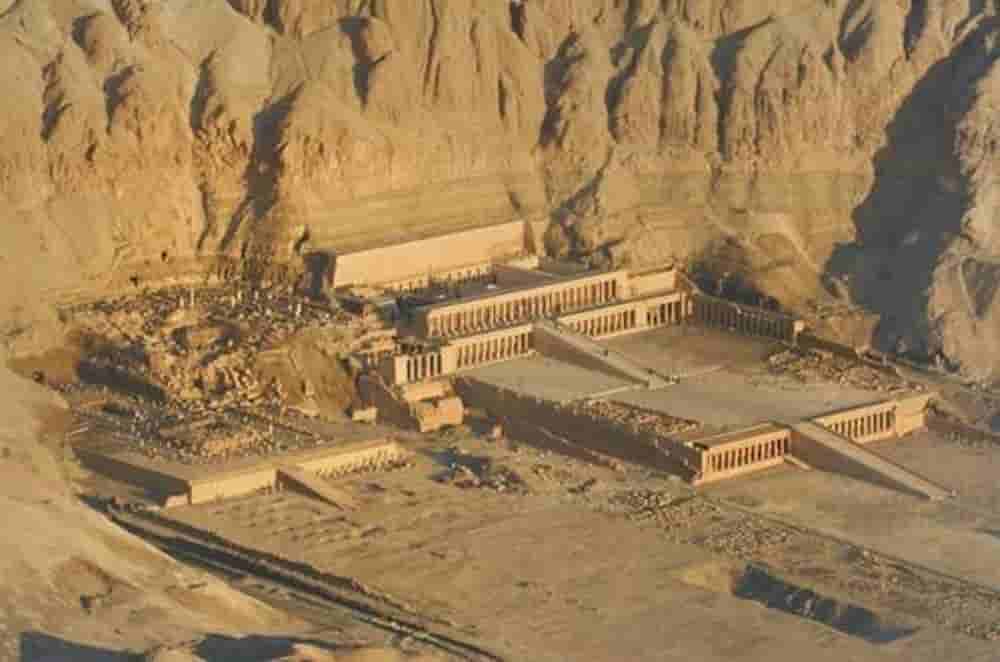 It is dedicated to Hatshepsut. Although she was the one to whom the temple was dedicated.

The truth is that we will not find remains that honor her person, since her brother, Thutmose III, would erase her entire trail when the throne was taken from her.

Deir el-Bahari, home of the Mentuhotep funerary temple, is also the site of Queen Hatshepsut’s temple.

This monument is considered unique throughout Egypt. Let’s see why.

The temple was built by Queen Hatshepsut, on large terraces with columns on the side of a mountain.

The building was the work of the architect Senenmut, and combines rock excavation and external construction.

The 36-meter-wide driveway was surrounded by sphinxes, and led from the temple to the large courtyard that was reached by means of two of the stepped terraces, joined by ramps.

Behind the entrance, the first terrace has a patio surrounded by low walls, decorated with images of boats destined to transport the obelisks from the city of Aswan to the temple of Amun, in Karnak,

In addition to some traditional hunting and fishing scenes.

Formerly, there were two ponds with vegetation and the porch was flanked by two statues of Osiris, of which one is preserved.

The second level of the temple is accessed through a ramp symbolically protected by a lion.

This terrace has a porch and two rows of 22 square pillars, ornamented with representations of the birth, education and coronation of the queen, restored by Seti I.

There is the chapel of Anubis, with three shrines, decorated with scenes from Thutmose I and Hatshepsut offering to Anubis and Amun.

The chapel of Hathor, carved into the rock, has two hypostyle halls.

The last terrace possessed 22 columns, destroyed by Thutmose III after the death of Hatshepsut.

Here, to the south, the chapel of Thutmose I and the chamber of offerings, on the rock. To the north, the rooms dedicated to Ra-Horakhty are erected.

Because of its complexity and the lavish effect that results from the combination of external building and rock excavation, this temple is unique and an unforgettable visit to Egypt. 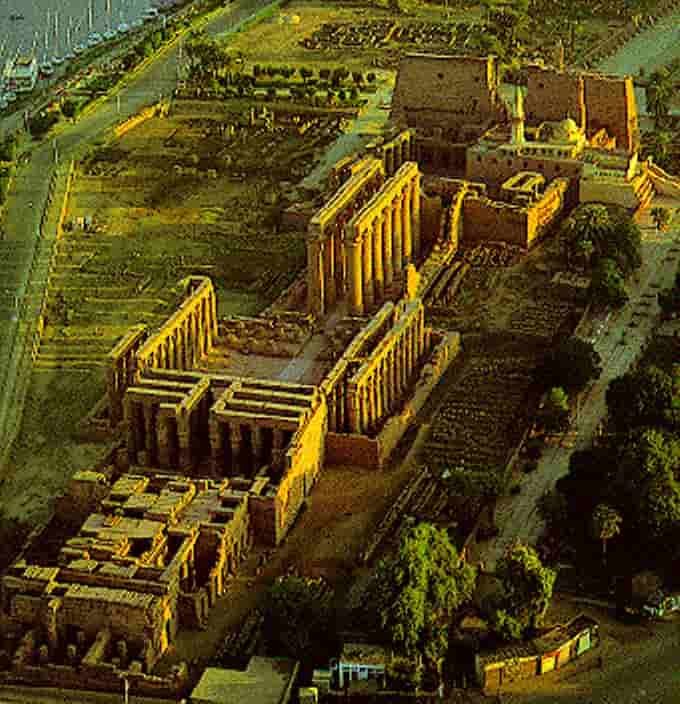 The Karnak Temple is the largest in Egypt and was throughout history a broad source of knowledge regarding ancient Egyptian culture and deities.

Even today, excavations continue to bring new discoveries to light.

This reality is not surprising if one considers that it was built between 2200 and 360 BC by different pharaohs such as Hatshepsut, Seti I, Ramses II and Ramses III.

The enclosure where the Karnak Temple is located is 2,400 meters perimeter and is surrounded by an 8 meter thick adobe wall.

The main enclosure corresponding to the Temple of Amun preserves in its interior other temples such as those of Khonsu, Ptah, Osiris, and the Temple of divine regeneration of Taharqa, Jubilee Temple of Amenhotep II and Ramses III.

Among other wonders that can be observed there are the sphinxes, the Sacred Lake and the Treasury of Thutmose I.

There is one of the most amazing light and sound shows that consist of storytelling as you go along the halls and parts of the temple are illuminated.