By @Sciencekitspage (self meida writer) | 1 months 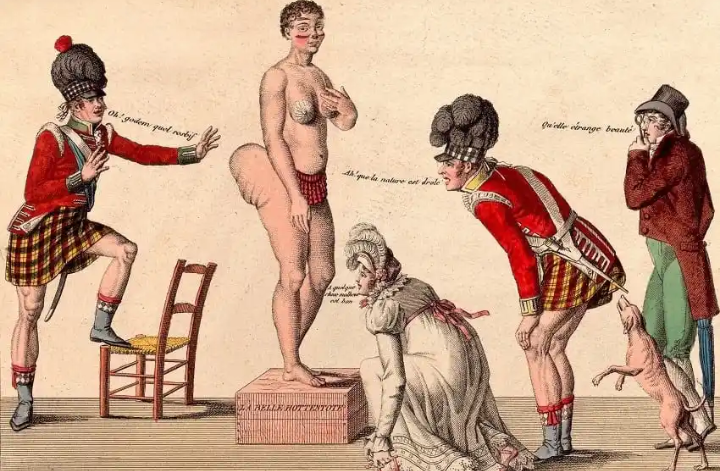 The objectification and over-sexualization of black women has in today's world become the norm. From rap videos to movies, black women's bodies are constantly paraded for entertainment. Sex sells and even more so when black bodies are on show. The history behind the over-sexualization of black women can be traced back to the 1800’s when Sarah Baartman’s (born Saartjie Bartman) buttocks were paraded across Europe to provide entertainment for Caucasian Europeans.

Sarah Baartman was a Khoikhoi woman born in 1789 in what is now known as the Eastern Cape, South Africa. She had a very difficult life. Her parents died when she was still young and ultimately grew up fending for herself as a domestic servant in Cape Town, South Africa. This may have made her more vulnerable to being exploited. She is famously known for being paraded across Europe as a freak show attraction due to her large buttocks. Her stage name was Hottentot Venus. 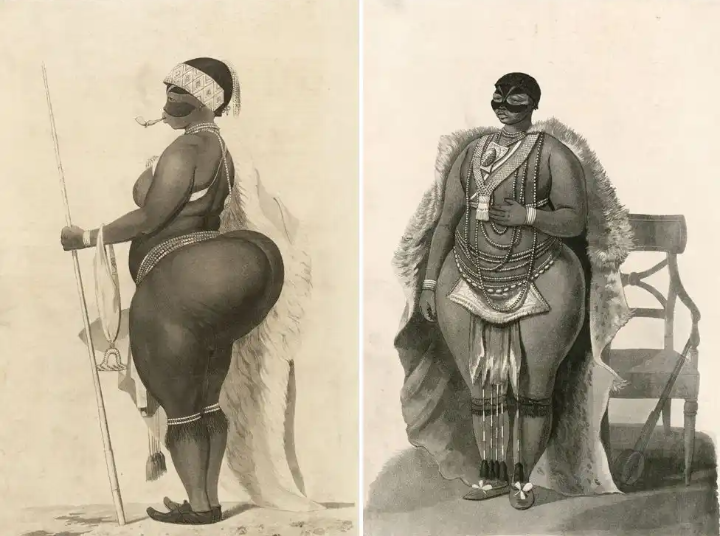 Sarah grew up on a colonial farm, where her family most probably worked as servants. She barely knew her mother as she had passed on when Sarah was only 2 years old, her father also passed on before Sarah reached adulthood. She married a Khoikhoi man who was a drummer, and they had one child together, who died shortly after birth.

As a result of colonial expansion the Dutch came into conflict with the Khoikhoi. This ultimately led to the KhoiKhoi’s gradual absorption into the labor system. At 16 years old Sarah’s husband was murdered by Dutch colonists. Grief seemed to latch onto Sarah.

Following the death of her husband Sarah was sold into slavery to a trader named Pieter Willem Cezar. He took her to Cape Town where Sarah became a domestic servant to his brother. During her time in Cape Town, Sarah being an indigenous Black African woman attracted a lot of attention due to her characteristic Khoikhoi large and protruding buttocks. She quickly became the object of sexual intrigue and desire by many European men in the area. This is where she caught the attention of William Dunlop, who was a ship surgeon.

Sarah’s big buttocks which made her intriguing were caused by steatopygia which is a genetic characteristic leading to more fat accumulating in the buttock region. It is mostly found in African women, particularly those of Khoikhoi origins like Sarah. Steatopygia resulted in Sarah’s extremely large protruding buttocks.

The freak show in London 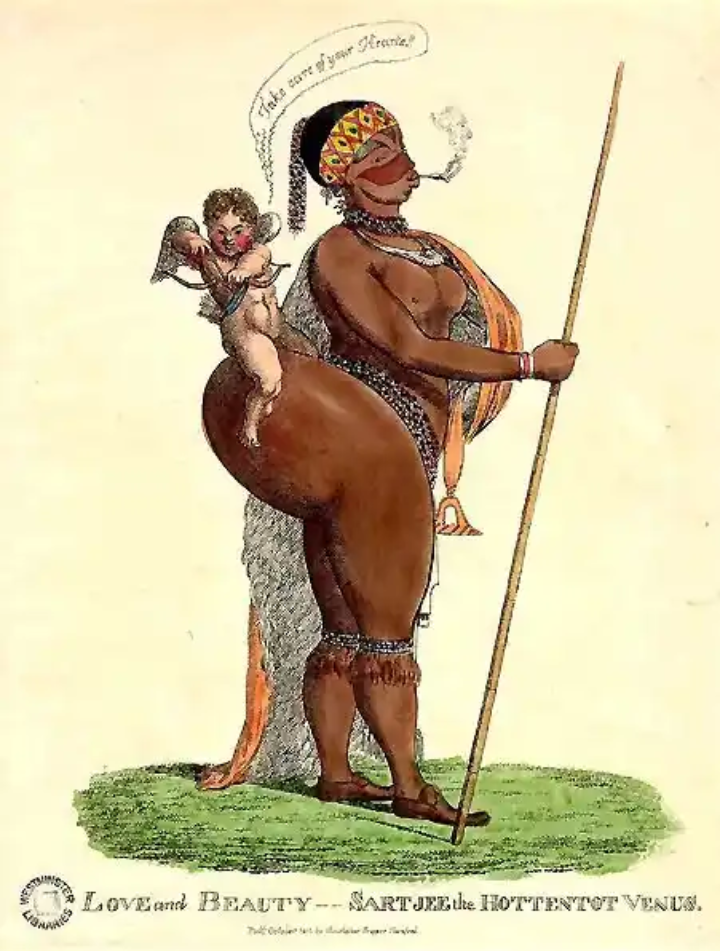 In 1810 Sarah was taken to England after she allegedly signed a contract agreeing to participate in shows there. The contract was signed between herself, William Dunlop and Hendrick Cezar, an entreprenuer whom she had worked for as a domestic servant. The existence of the contract is debatable and rather dubious.

Sarah was illiterate therefore it is unlikely that she had agreed or understood the nature of the contract. It has also been argued that during the period when the contract was signed, the Cezar’s were experiencing financial difficulties and used Sarah to earn money.

The apparent terms of the contract were that Sarah would travel to England and Ireland with William Dunlop and Hendrik Cezar. There she would work as a domestic servant and be exhibited for entertainment purposes. According to the alleged contract she was to receive a portion of the earnings made from the exhibitions and be allowed to return to South Africa after a period of 5 years had lapsed.

Sarah was taken to London where she was displayed in a building in Piccadilly. British men and women paid one shilling to see Sarah’s half naked body displayed in a cage. Society’s more affluent could pay a higher price to touch Sarah’s body in particular her buttocks which attracted a lot of fascination.

The added fascination of Sarah’s buttocks was due to the fact that the fashion in that era revolved around a silhouette that exaggerated the buttocks of women by adding extra padding bows and frills. Sarah on the other hand had the desired silhouette naturally. She was inspected, somewhat longingly by those that came to view the exhibition.

Sarah become a popular exhibition and toured Europe. During her time with William and Hendrick, slavery began losing its popularity in Britain. There was a campaign against slavery underway and the treatment of Sarah was called into question. This led to William and Hendrick being put on trial but this did not lead to any prosecution or any other consequences. They were able to produce the contract that Sarah had allegedly signed. Sarah had also given a statement confirming that she was not being mistreated. The fairness of the trial is questionable as Sarah was in no position to speak out against William and Hendrick. She was not in a position of power and this may have been exploited by both William and Hendrick, turning the trial into nothing more than a farce.

However, as a result of the trial, Sarah’s contract was amended to include a higher share of the profits, better working conditions and the provision of warm clothes.

In 1814 Sarah was transported from England to France where she was sold to Reaux, a man who showcased animals. He exhibited her around Paris and made lots of money from the French’s fascination with Sarah’s body. Reaux exhibited Sarah in a cage alongside baby rhinos. Her treatment worsened as she was treated like an animal and ordered to perform tricks as though she too was a circus animal.

In France Sarah would be displayed wearing almost nothing. Her only covering was a little tan loin cloth. Sarah’s popularity attracted the attention of George Cuvier, a naturalist. Cuvier asked Reaux if he could study Sarah as a science experiment to which Reaux agreed.

From 1815, Sarah was studied by French anatomists, zoologists and physiologists. They argued that Sarah was a link between the human race and animals. They used Sarah to perpetuate the narrative that Africans were an oversexed, primal and lesser race.

During this time, it is believed that Sarah became a heavy drinker and got into prostitution which may have been forced given the lax in issues pertaining to consent during her era. Considering the grotesque treatment she received this would not come as a surprise.

The freak show continued even after death

Sarah died in 1816, aged 26. Her cause of death is uncertain but it has been suggested that her death may have been as a result of smallpox, pneumonia, syphilis or alcoholism. Cuvier obtained the remains of Sarah’s body from the local police. He then went on to make a plaster of Sarah’s dead body before dissecting it.

Cuvier then pickled Sarah’s brain and genitalia and placed them in jars on display at the Musée de l’Homme (Museam of Man) in Paris until 1974. Sarah’s genitalia, buttocks and organs were perceived as evidence of her sexual oddity and her intelligence was likened to that of an orangutan.

The story of Sarah resurfaced in 1981 when Sarah’s story was released in the form of a book titled The Mismeasure of Man by Stephen Jay. Following South Africa’s first free and democratic elections which brought an end to apartheid. Late former president of South Africa, Nelson Mandela requested that Sarah’s remains be returned to the country for burial.

The French only agreed to the request 8 years later after debating the matter in parliament and drafting a carefully worded Bill ensuring that other countries would not be able to claim back other treasures that France had taken during the colonial era. France ultimately returned the remains of Sarah in March 2002. Over 200 years after her birth, Sarah was finally laid to rest in South Africa on August 9, 2002. This date is celebrated as Women’s day in South Africa.

The story of Sarah Baartman highlights the morbid history of the over sexualization of black women's bodies. There are so many parallels that can be drawn from Sarah’s experiences to life as a woman today. Rape culture remains rife and women 200 years later are still considered the lesser sex in so many parts of the world.

OPINION : Why This Yoruba Politician Is The Only Deserving President For Nigeria Presidency In 2023

Opinion: Lionel Messi Is The Best Footballer In The World