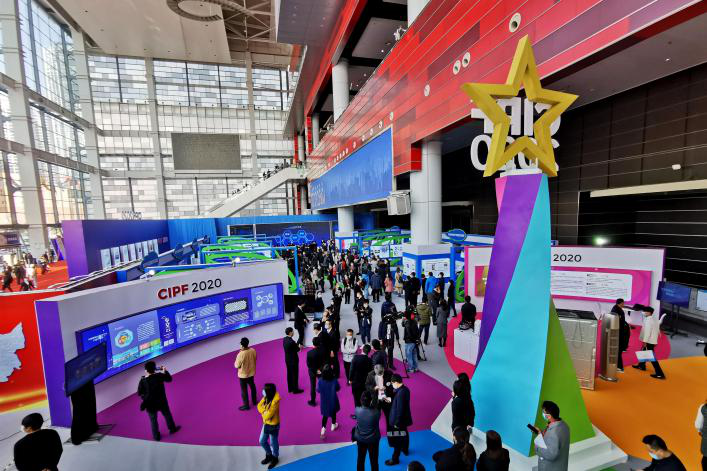 Photo taken on Nov. 11, 2020, shows visitors at an exhibition of China’s achievements in intellectual property during the country’s 13th Five-Year Plan (2016-2020) period. The exhibition was part of the 12th China International Patent Technology and Products Fair that opened in Dalian, northeast China’s Liaoning province, on Nov. 11, 2020. (Photo by Liu Debin/People’s Daily Online)

In the past five years, China continuously pushed forward cracking down on infringements and counterfeiting, achieving solid progress in protecting intellectual property rights (IPR) and creating a market-oriented, law-based, and internationalized business environment.

During the same period, the total amount of the country’s patent and trademark pledge financing rose from 84.85 billion yuan (about $13.08 billion) to 218 billion yuan, according to Shen. 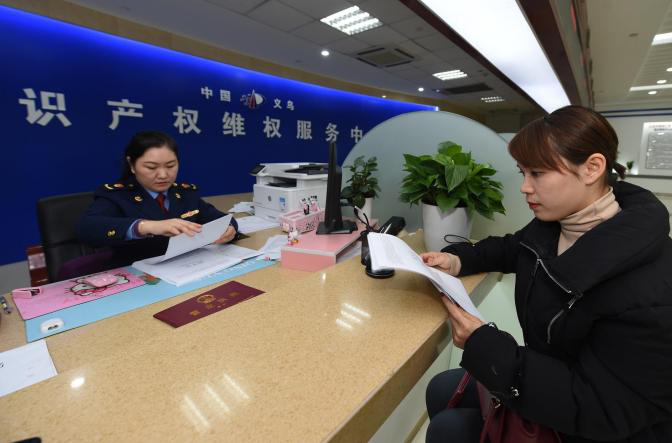 When people talk about “Yema” (which means “mustang” in Chinese) automobile, the first thing that comes to the minds of many people would probably be Mustang, a high-performance sports car brand under American automaker Ford Motor Company. However, Chinese automobile manufacturer Sichuan Yema Automobile Co., Ltd. based in Chengdu, capital of southwest China’s Sichuan province, already successfully registered the trademark “Yema” in 1986.

In 2018, the Intermediate People’s Court of Chengdu issued a judgment of first instance over the case, and ordered Ford China Co., Ltd., a wholly-owned subsidiary of Ford Motor Company in China, to stop infringement of the exclusive right of Sichuan Yema Automobile Co., Ltd. to use the trademark of “Yema” and pay the latter one million yuan in compensation for economic loss, according to media reports.

In 2019, China’s National Overseas International Property Disputes Response and Guidance Center was established under the guidance of the CNIPA. After that, the CNIPA approved the establishment of 10 local sub-centers across the country to offer guidance to Chinese entities on resolving overseas IP disputes. 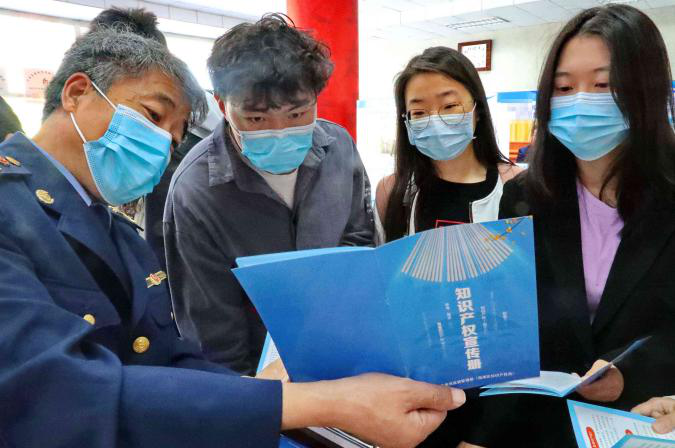 A staff member of the market supervision and regulation bureau of Haigang district, Qinhuangdao, north China’s Hebei province, which is also the intellectual property (IP) office of the district, popularizes knowledge about IP among students of Yanshan University in Qinhuangdao, April 25, 2021. (Photo by Cao Jianxiong/ People’s Daily Online)

Besides, the CNIPA has set up a coordination mechanism for major cases to help enterprises actively cope with them, and continuously optimized worldip.cn, a national information service platform established to provide such information as foreign laws, regulations, and international treaties on IP. At present, the website offers 1,339 IP laws and regulations in 189 countries and regions and international treaties as well as more than 40 guides to overseas IP practice.

In addition, the administration has made efforts to strengthen overseas IPR risk prevention and control mechanism, compile and publish guide for safeguarding IPR to address the problem of overseas trademark squatting for Chinese enterprises, and intensify training for IP professionals. So far, such training sessions provided by the CNIPA have benefited a total of 45,000 people.

In China’s latest medium and long-term economic and social development blueprint, the Outline of the 14th Five-Year Plan (2021-2025) for National Economic and Social Development and the Long-Range Objectives Through the Year 2035, the country made clear arrangements for the efforts to enhance IPR protection in the next five years, according to Shen.

According to Shen, the CNIPA is going to make solid efforts to do a good job in IPR protection in accordance with relevant arrangements in the national plan.

The CNIPA will enhance the top-level design of IPR protection, and ensure good planning and earnest implementation for the national IP strategy to accelerate the construction of an IP power country and the IPR protection and application plan for the 14th Five-Year Plan period.

Efforts will also be made to perfect relevant systems and mechanisms. Centering around carrying out a strict IPR protection system, the administration will concentrate on sound implementation of the punitive compensation system, improving relevant laws and regulations, accelerating the legislation for IPR in new fields and new business forms like artificial intelligence (AI) and big data, as well as perfecting administrative law enforcement and guidance mechanism as well as the systems for arbitration, mediation, and aid for safeguarding IPR.

Besides, the CNIPA is going to continue deepening the reform of IPR protection mechanisms and systems, especially patent subsidy and reward policies as well as examination and evaluation mechanisms, so as to better protect and encourage high-value patents and expand patent-intensive industries.

Infrastructure construction will be further enhanced to better protect IPR. The CNIPA will strengthen the construction of IPR-related information and intelligent infrastructure facilities, speed up the building of the national big data center for IP, and build a public service platform for the protection and application of IPR.