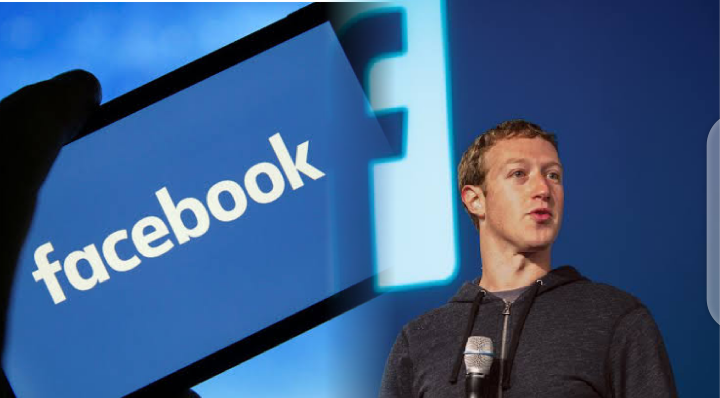 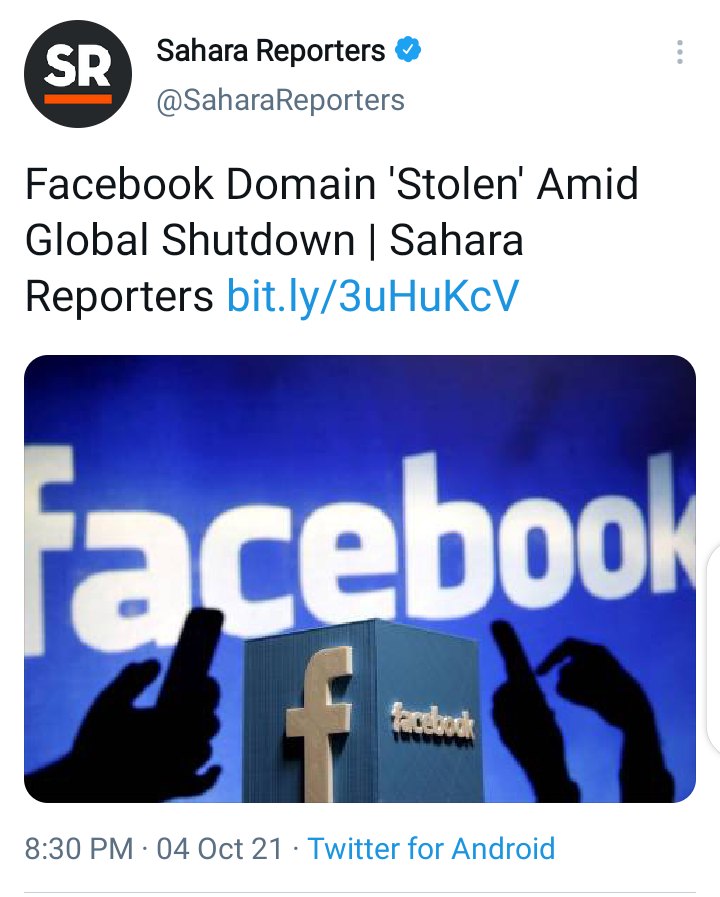 There has been a widely reported inability to access the services since Monday afternoon after a yet-to-be-identified hacker nuked the DNS A; an address file that holds an IP address of the domain name and AAA records for Facebook, Instagram and Whatsapp.

Earlier the company had tweeted about Whatsapp, saying, “We’re aware that some people are experiencing issues with WhatsApp at the moment. We’re working to get things back to normal and will send an update here as soon as possible.”

The main domain of Facebook company, Facebook.com, is now available for purchase.

Facebook owner, Mark Zuckerberg’s personal wealth has fallen by nearly $7 billion in a few hours, knocking him down a notch on the list of the world’s richest people, after a whistleblower came forward and outages took Facebook Inc.’s flagship products offline. 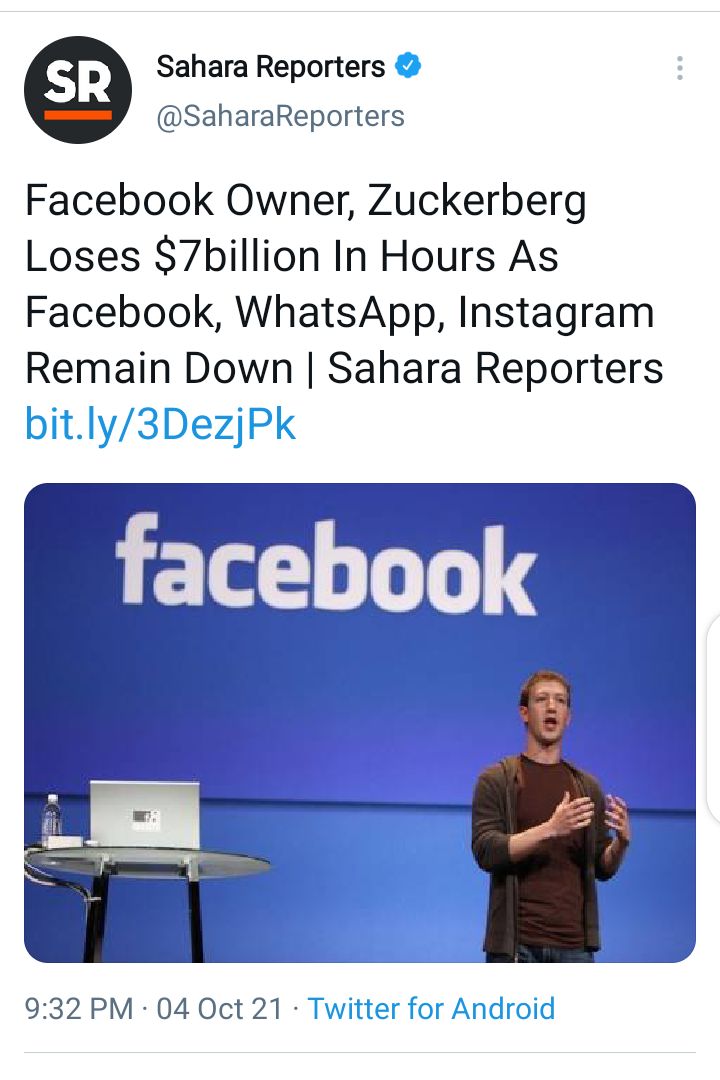 This is just as Facebook's co-messaging apps, WhatsApp and Instagaram remained down after four hours of global outage which has upset businesses and disconnected billions of people around the world.

According to Bloomberg, a selloff sent the social-media giant’s stock plummeting around 5% on Monday, adding to a drop of about 15% since mid-September.

The stock slide on Monday sent Zuckerberg’s worth down to $120.9 billion, dropping him below Bill Gates to No. 5 on the Bloomberg Billionaires Index. He’s lost about $19 billion of wealth since September 13, when he was worth nearly $140 billion, according to the index.

A father, two children as well as their cousin have been abducted by kidnappers in Ondo State.

The family of four were kidnapped at Iju-Itagbolu community in Akure North Local Government Area of the state. 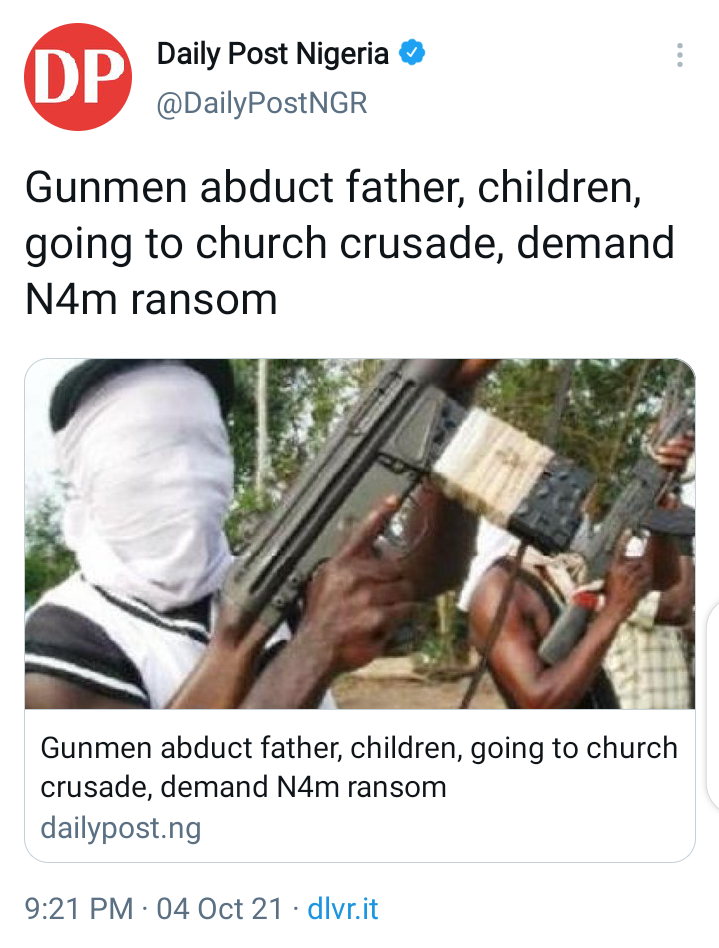 The victims were said to have been abducted by the gunmen while on their way from Ado Ekiti to attend a church crusade in Akure, the state capital.

The four victims were travelling in a blue space bus with three other passengers, when the gunmen who shot sporadically in the air forced them to stop them.

For the umpteenth time this year, the South-South Governors of the Niger Delta region have spoken again, and have urged President Muhammadu Buhari “to uphold the law establishing Niger Delta Development Commission (NDDC) by appropriately constituting its governing board.” 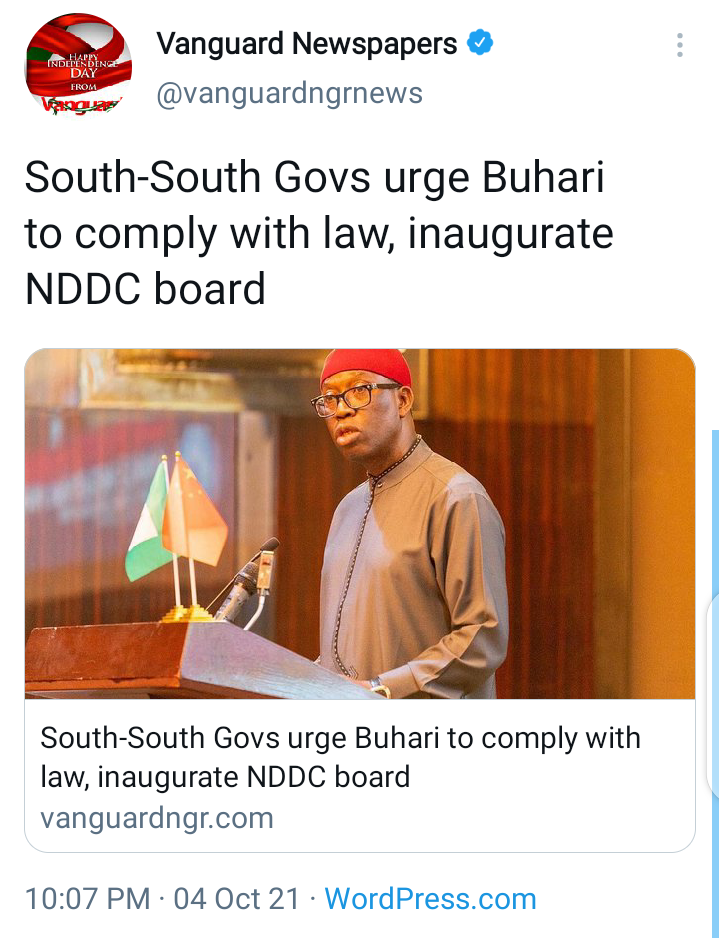 Speaking after their meeting in Government House, Port Harcourt, Rivers state capital on Monday, October 4, 2021, the Chairman of the South-South Governors forum, Governor Ifeanyi Okowa of Delta State also expressed the hope that the federal government would make the forensic audit report public and “deal justly and fairly with the report with a view to strengthen the capacity of NDDC to meet its obligation to the people of the region.”