By GOwiszy (self meida writer) | 1 months

On 8 September 2019, the 71,000-tonne MV Golden Ray cargo ship made it a mere 23 minutes from Port of Brunswick harbour in Georgia before it started to list. The vessel capsized moments later, triggering a multi-day rescue effort.

All 23 crew members survived the ordeal, and although the cause has yet to be confirmed, although it’s thought the loss of stability was down to issues in the way the cargo was loaded. Predominantly, that cargo was made up cars - some 4200 of them, which had mostly come from Mexican factories and were on their way to the Middle East.

A 400-foot anchor chain is being used to cut sections, exposing the many Hyundai cars trapped inside the ship. The team behind the dismantling operation used a Versabar VB-10000 lift vessel with an enormous yellow dual-barge crane to lift the MV Golden Ray out of the water, allowing it to be sliced.

The Versabar VB-10000 was originally built in order to help fix oil platforms damaged by hurricanes back in 2010. Each of its two barges has 1,000 horsepower thrusters to keep the vessel positioned correctly over the wreckage. The bottom half of the bow section of the Golden Ray is covered with marine life after spending 14 months stranded in the sea. 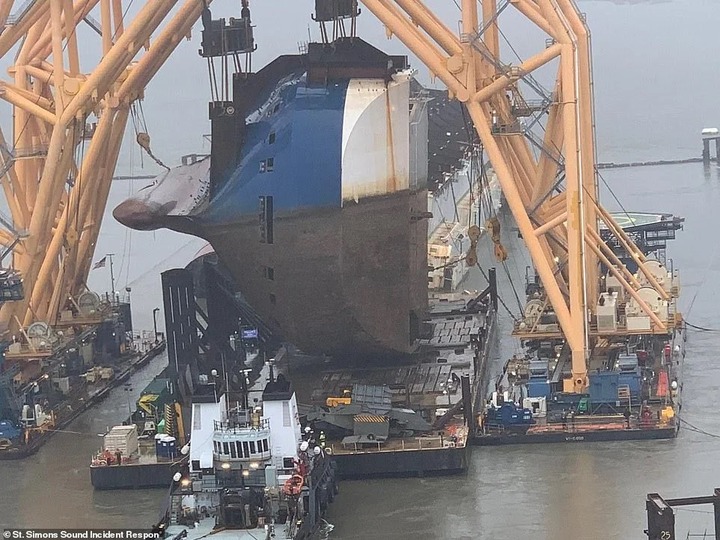 The MV Golden Ray was a 200-metre (660 ft)-long car carrier that capsized on 8 September 2019 in St. Simons Sound near the Port of Brunswick in Georgia, United States. She was eventually declared a total loss and is being removed as scrap. Content created and supplied by: GOwiszy (via Opera News )

8 Health and Nutrition Benefits of Pears.

Do you have any special event ahead? Check out these colourful aso ebi designs

Today's Night prayer: “Father, disappoint every device of the crafty in my life”