By YAHAYA (self media writer) | 2 months ago 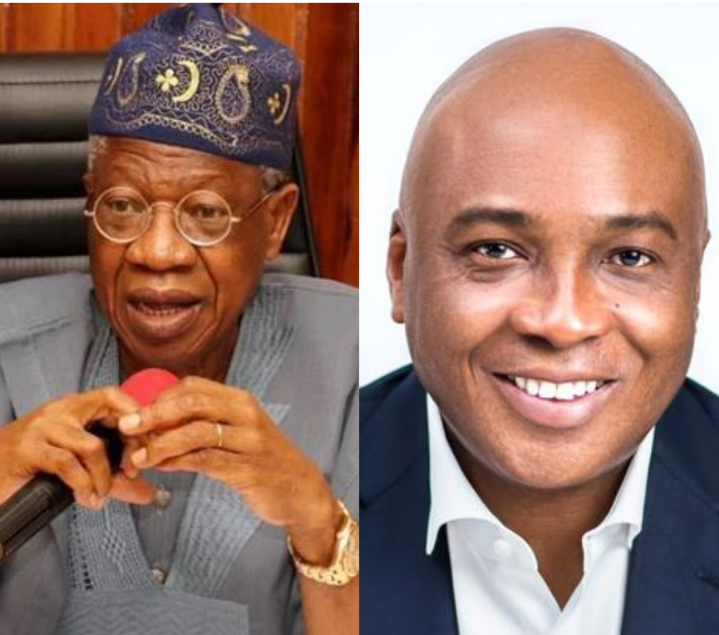 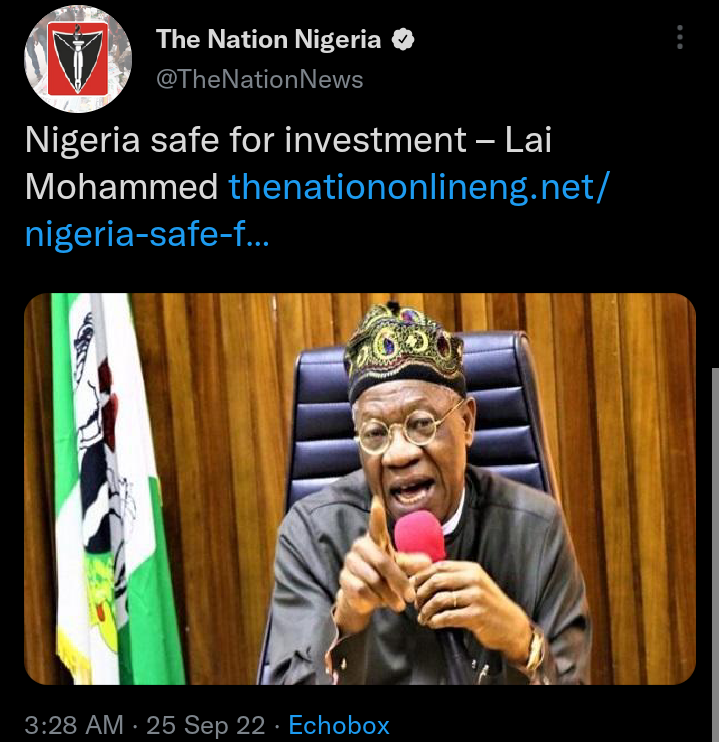 Minister of Information and Culture, Alhaji Lai Mohammed has said Nigeria is safe for investment and that one of the fastest ways to grow the global economy is to engage the youths through job creation in the tourism and creative sectors.

He made the declaration yesterday in Lagos while addressing journalists at the forthcoming United Nations World Tourism Organization (UNWTO) conference.

The conference will be hosted by Nigeria at the National theatre Iganmu Lagos.It will open on November 14th and end on 16th with the theme: UNWTO global conference on linking tourism, culture and creative industries; part ways recovery and inclusive development. The minister said: “One of the pragmatic priority concerns of the UNWTO this year is to protect our heritage, work towards social, cultural and environmental sustainability. All these mean inclusive growth, creating more jobs for millions of people.” He reassured that Nigeria is working tirelessly to combat terrorism there by making the society secure for investment. 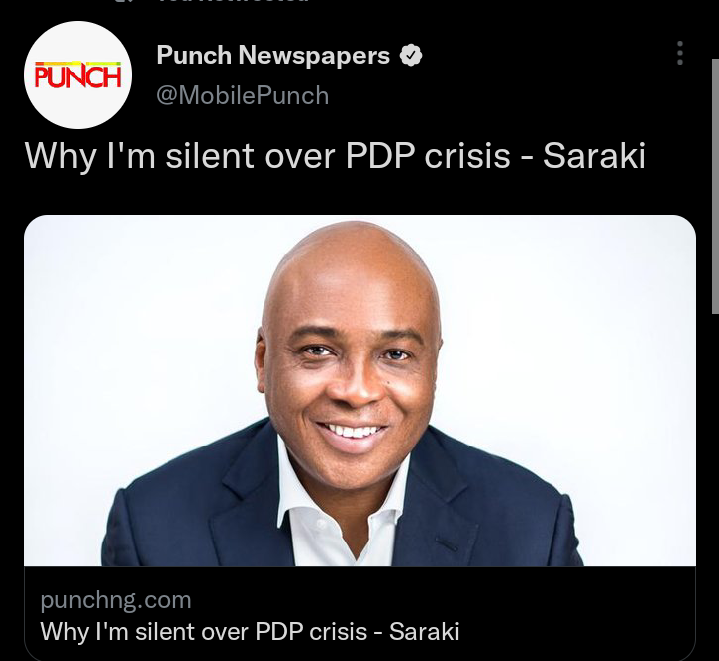 Former Senate President Bukola Saraki has spoken after a long time, giving reasons why he has been silent over the series of crises rocking the Peoples Democratic Party.

Saraki, who just returned from an annual vacation, went straight to Akwa Ibom State to join the celebration of the 35th anniversary of the state’s creation.

Saraki said he had been working silently, adding that there were times when it was necessary to do this.

The PUNCH reports that the PDP, of which Saraki is a member, has been battling leadership crisis, particularly the aggressive calls for the resignation of its National Chairman, Iyorchia Ayu, specifically led by governors Nyesom Wike and Seyi Makinde of Rivers State and Oyo State respectively.

The Bola Tinubu They Don’t known 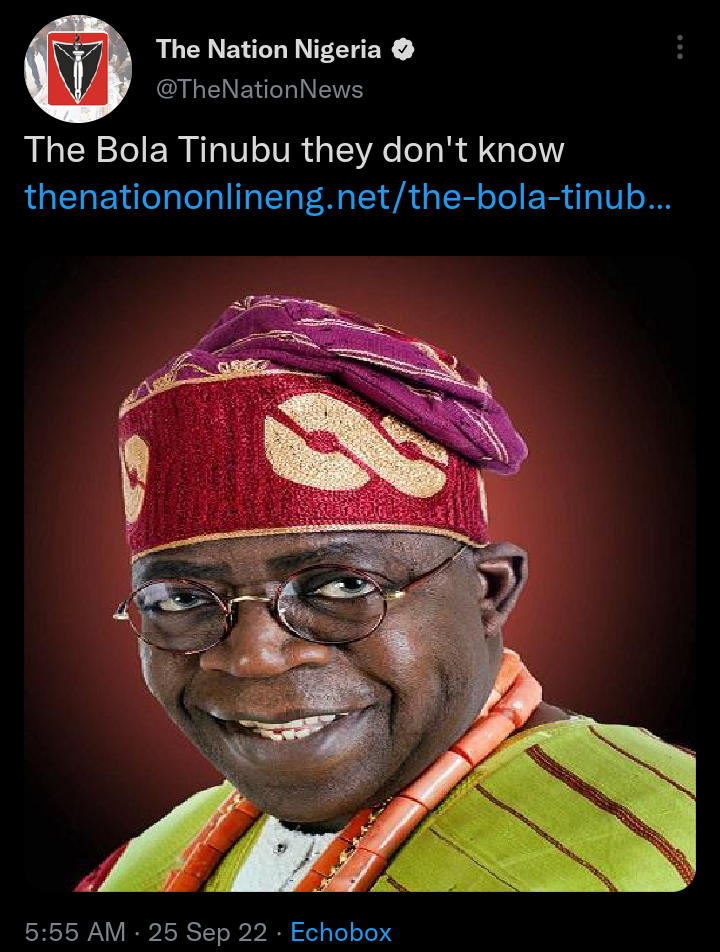 The seemingly ingrained tendency for human beings to so easily forget their antecedents, repay evil for good and seek to destroy those God chose to use as their benefactors never ceases to amaze me. As a passionate member of the All Progressives Congress (APC), I am saddened at the concerted, coordinated and consistent effort by a caucus within the party to diminish the influence and relevance of one of the prime architects and engineers of the party, namely Asiwaju Bola Ahmed Tinubu.

In fact, Bola Tinubu was one the young men and women who flocked around Chief Moshood Abiola , Nigerian President-presumptive and winner of the June 12, 1993, presidential election. Tinubu was elected Senator on the platform of Abiola’s Social Democratic Party (SDP), to represent Lagos-West in Abuja. He was a dapper-dresser; handsome and precocious. 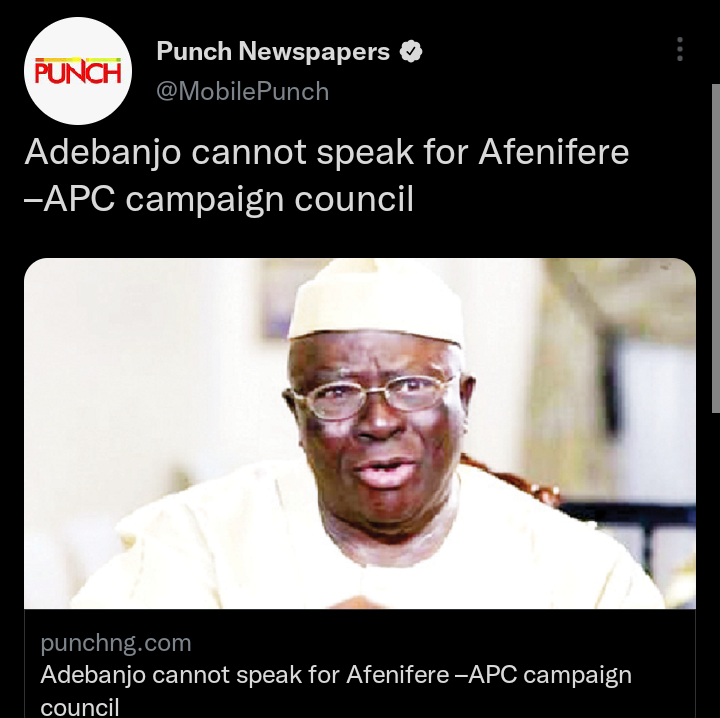 The Presidential Campaign Council of the All Progressives Congress on Saturday said the acting Leader of the pan-Yoruba socio-cultural organisation, Afenifere, Chief Ayo Adebanjo, cannot turn the organisation into his personal franchise for political alliance.

This was made known in a statement signed by the Director, Media and Publicity of the APC Presidential Campaign Council, Bayo Onanuga.

The statement titled, “Our reaction to Baba Ayo Adebanjo and his new Ohanifere venture”, was in reaction to Chief Adebanjo’s earlier position to adopt and support Peter Obi of the Labour Party as the preferred presidential candidate for the 2023 elections.

Content created and supplied by: YAHAYA (via Opera News )