History: The Forgotten Groundnut Pyramids of Nigeria, The Former Pride of The West African Nation.

By Infosavvy (self media writer) | 9 months ago

the Egyptians built pyramids with bricks and stones, Nigeria a country in West Africa also did a similar thing but this time it was with bags of groundnut stacked to form a pyramid shape.

The groundnut pyramid was built in Northern cities such as Kano, Malama Madori, and Bebeji from the 1910s.

The city of Kano and other areas in the north were then witnessing a boost in economics and commercial activities and locals indulge in several crafts such as bread making.

These cities experienced a boom in groundnut production which eventually became the major export of the Nation in the 1960s. 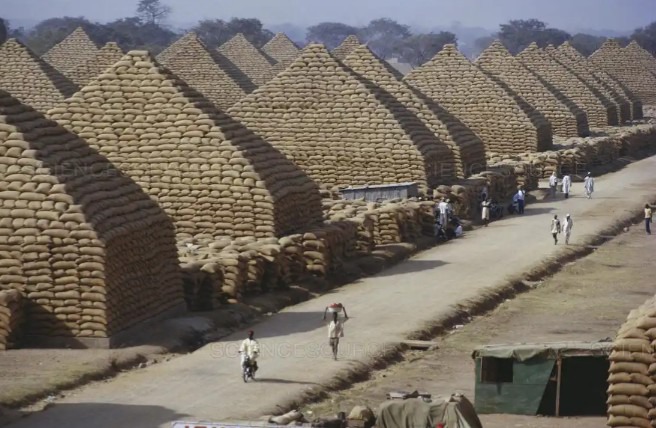 Groundnut pyramid: They were Pyramid structures made from groundnut sacks that towered up to the sky with a wonderful appearance like that of the Egyptian pyramid.

The groundnut pyramid structures were very common in the 1960s and 70s these pyramids were so tall that some could hold over 15,000 bags of grain and seed collection.

In the 1960s groundnut production was so lucrative that both farmers and businessmen got attracted to the crop because of its significant return.

Alhaji Alhasan Dantata a wealthy merchant who supplied to the royal niger company accumulated thousand bags of groundnut and usually display them in a form of a pyramid before having them exported overseas. The groundnut pyramid wasn't only a symbol of economic attainment but also a tourist attraction as well.

What Happened to the Pyramids? However, most people blame the disappearance of the fabulous pyramids to Nigeria's shift from agriculture to oil in the 1960s and 70s placing all its priority on the income it was leveraging from crude oil export. Environmental factors particularly drought and the rosetta virus epidemic affected groundnut productions in the 1980s and the virus destroyed over 700,000 hectares of the crop in the region. Farmers immediately restored to other crops such as cowpeas, cereal, etc. Gradually the one-time pride of the nation faded away into memory. Today areas that hosted these pyramids have been taken over by buildings and other commercial structures.