By Oluwapolycarp | self meida writer
Published 1 months ago - 2 views

Following the recent happenings in the country especially food blockade from North against the South, leader of the proscribed IPOB, Nnamdi Kanu in a recent tweet has angrily responded to the report.

It could be recalled that a few days ago, several trucks loaded with cattle and foodstuff were restricted by youths on highways and prevented them from moving from the northern part of the country to the southern region.

This came after farmers and cattle dealers under the aegis of “Amalgamated Union of Food Stuff And Cattle Dealers Of Nigeria” in the North decided to stop food supply to the South. However, there is good news that the trucks were released and those goods have since been moved to its destination in the South and West. 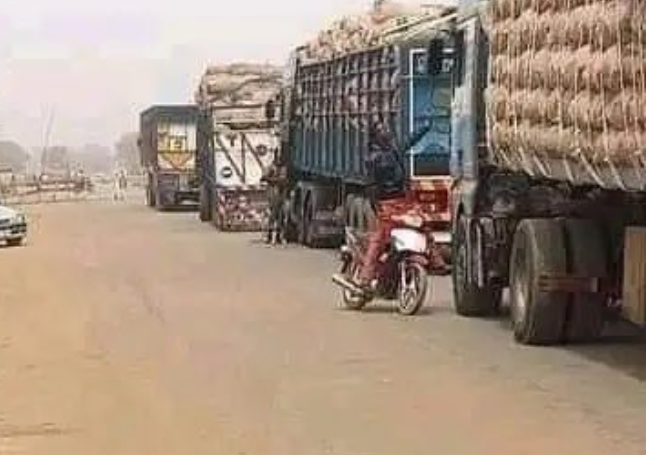 Meanwhile, Nnamdi Kanu was not really happy about the situation surrounding the food blockade against the South. He took it to his Twitter account to express his anger over the issue. He further accused Fulani herdsmen of coming to the South to destroy farms and now, they're blocking food from reaching the same South. See his tweet below; 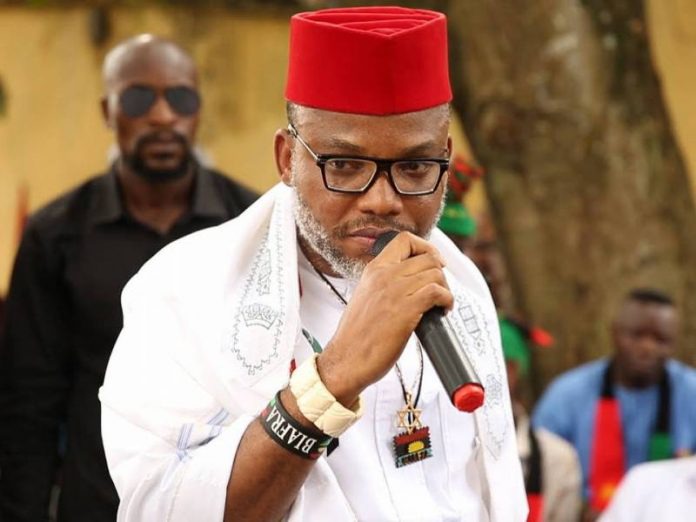 “The misguided FULANI levying food blockade against the South should hear this: By this latest move, your secret plots have become clearer. You send your herdsmen to destroy farms in the South & make it worse by blocking food to the same South. You will get your comeuppance, soon!” 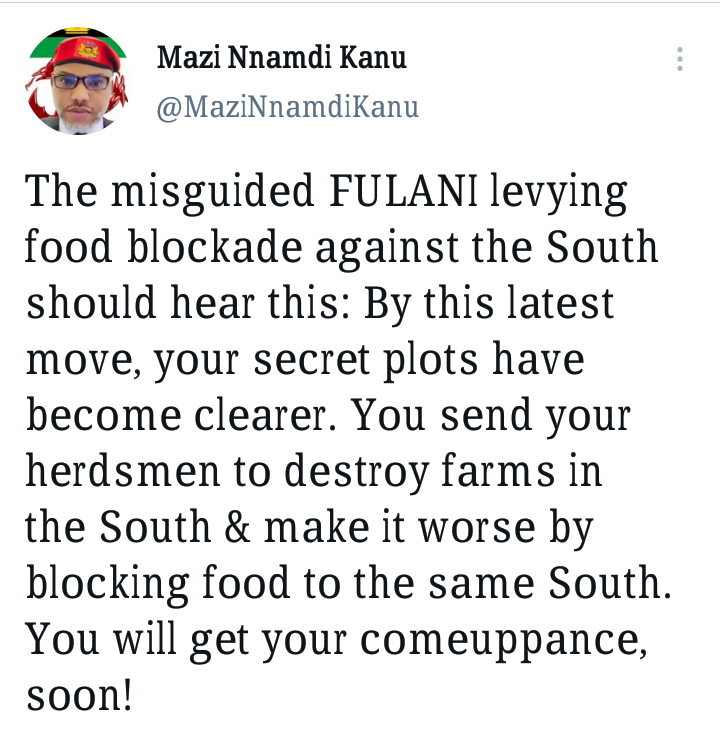 After the tweet went viral on social media, see people's reactions below; 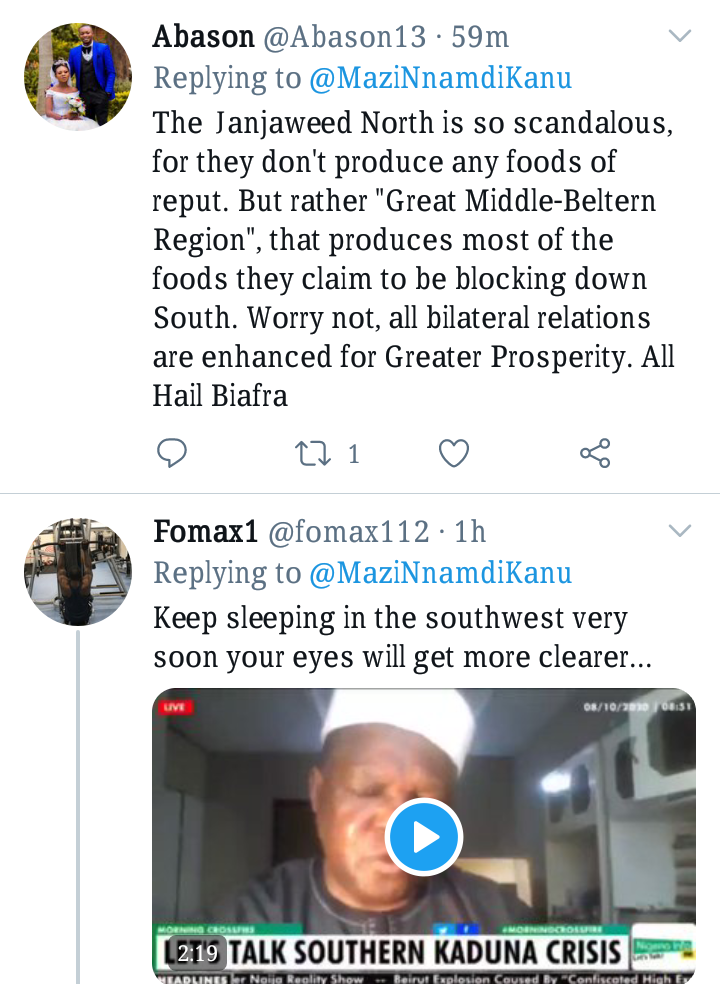 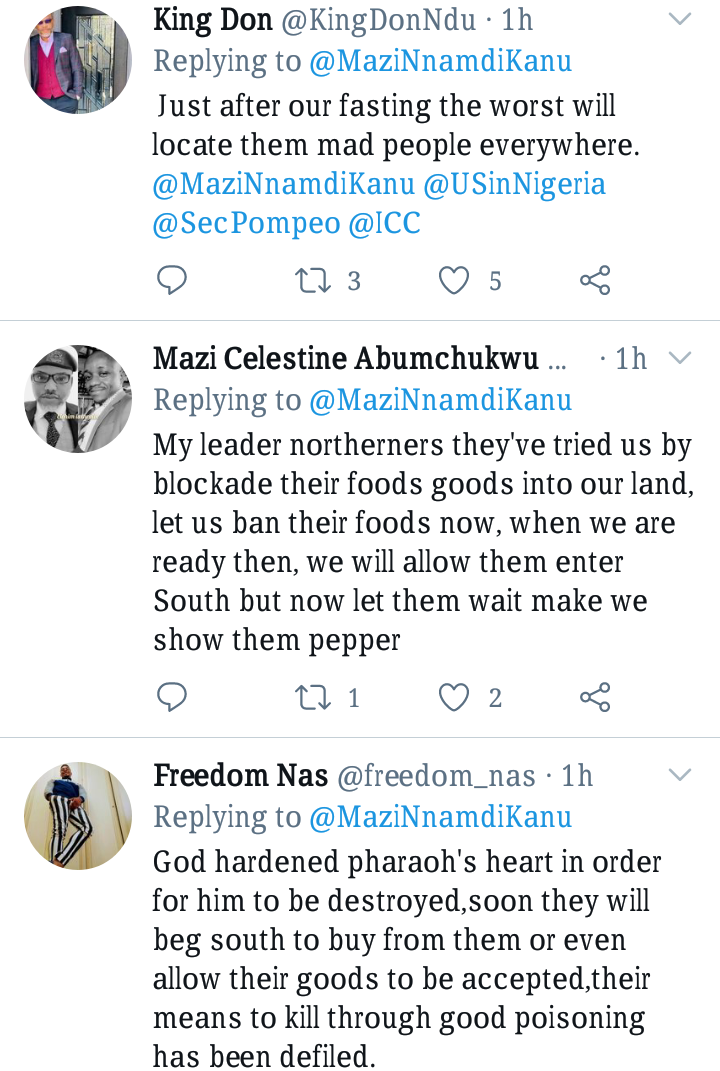 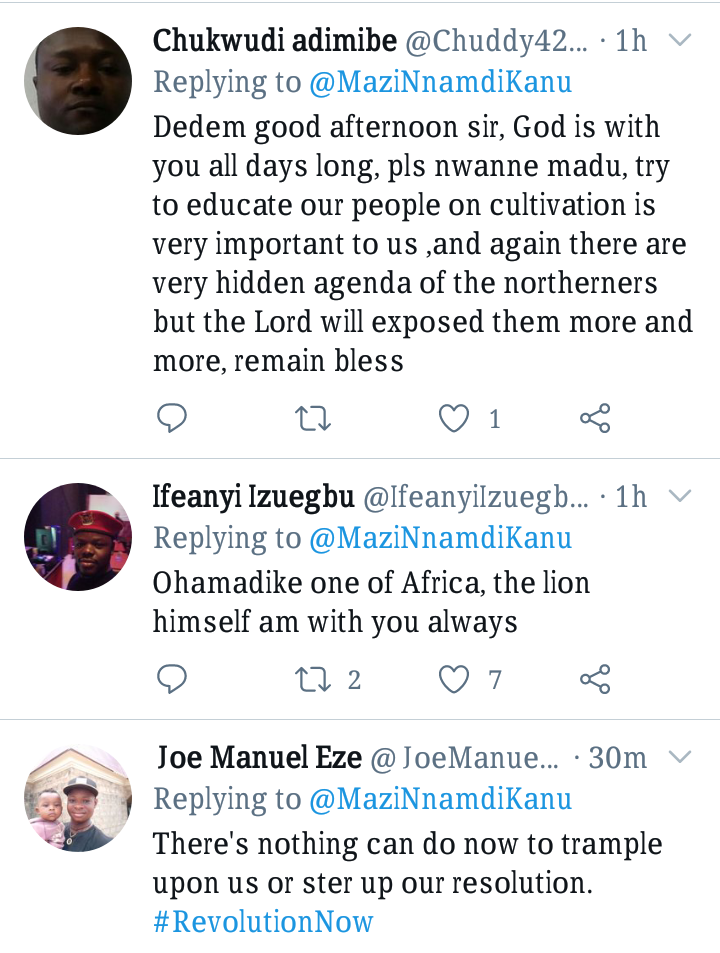 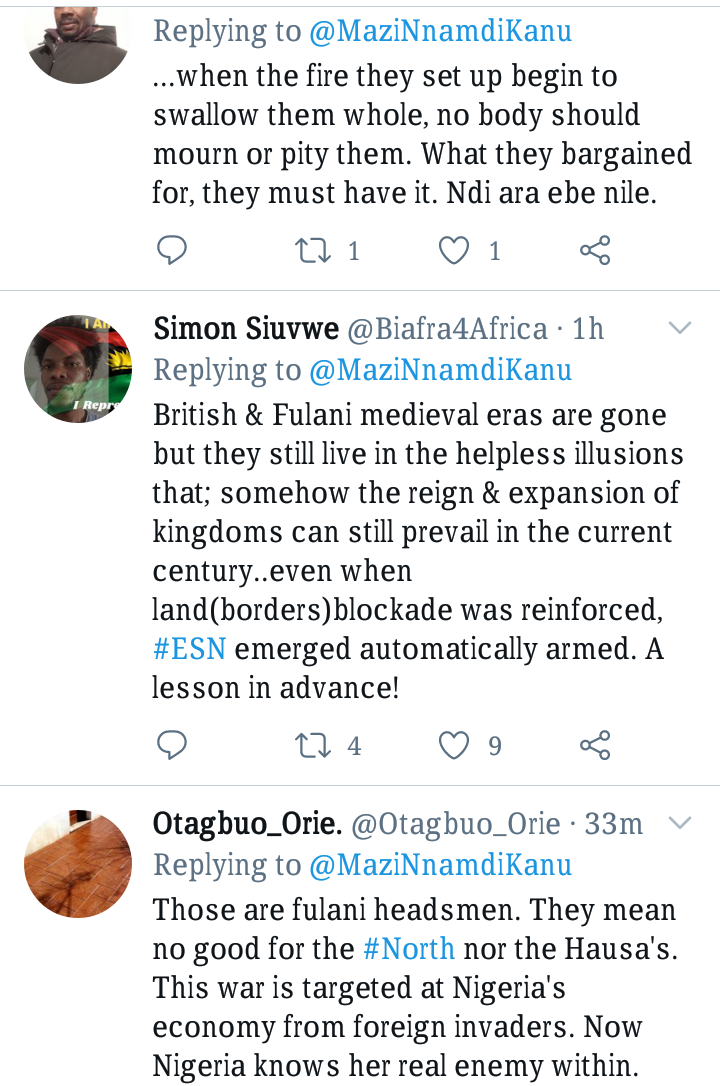 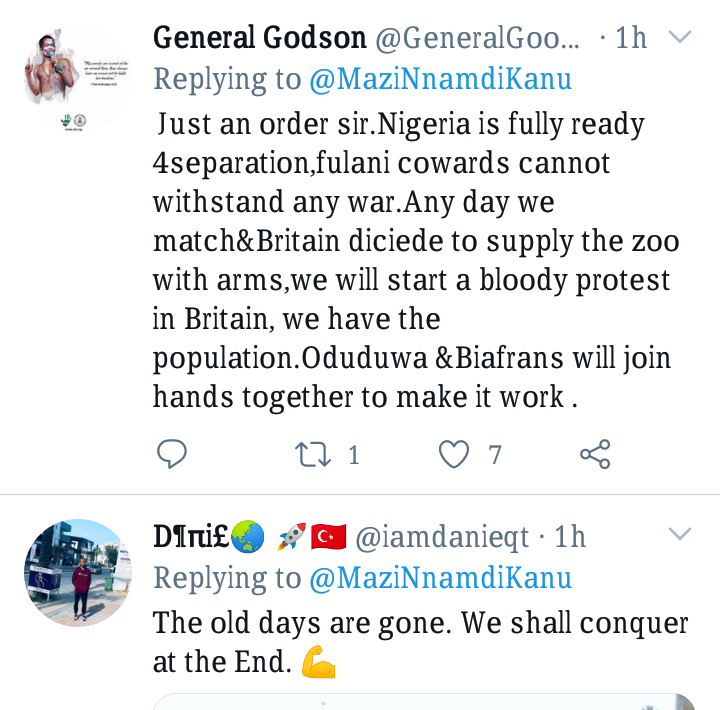 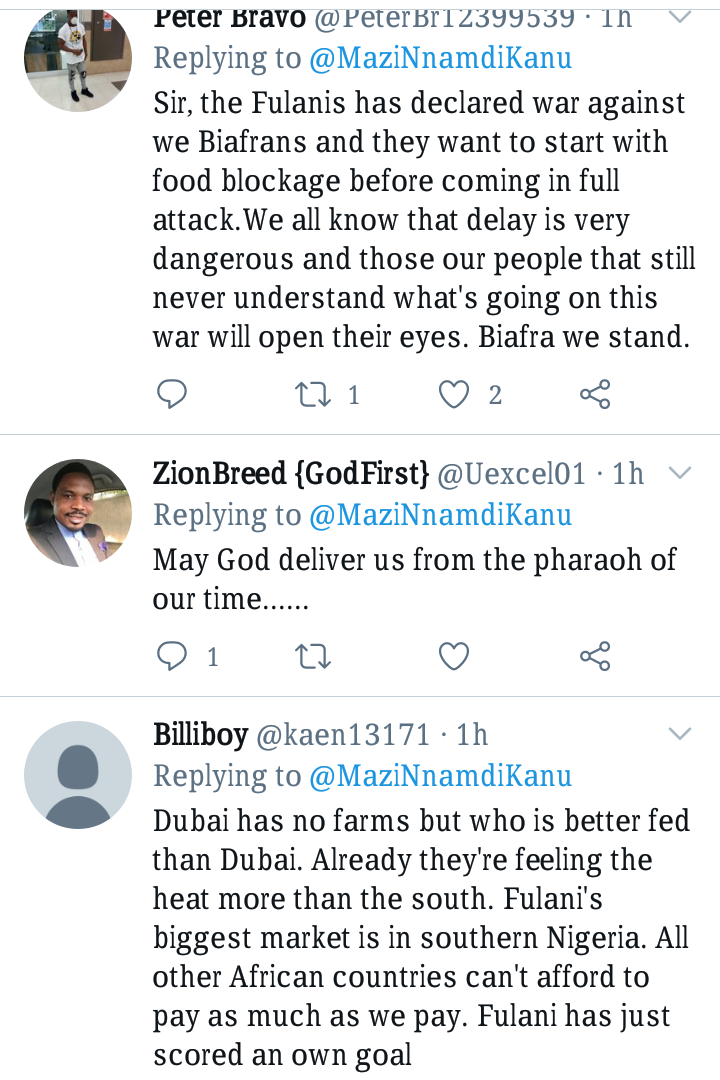 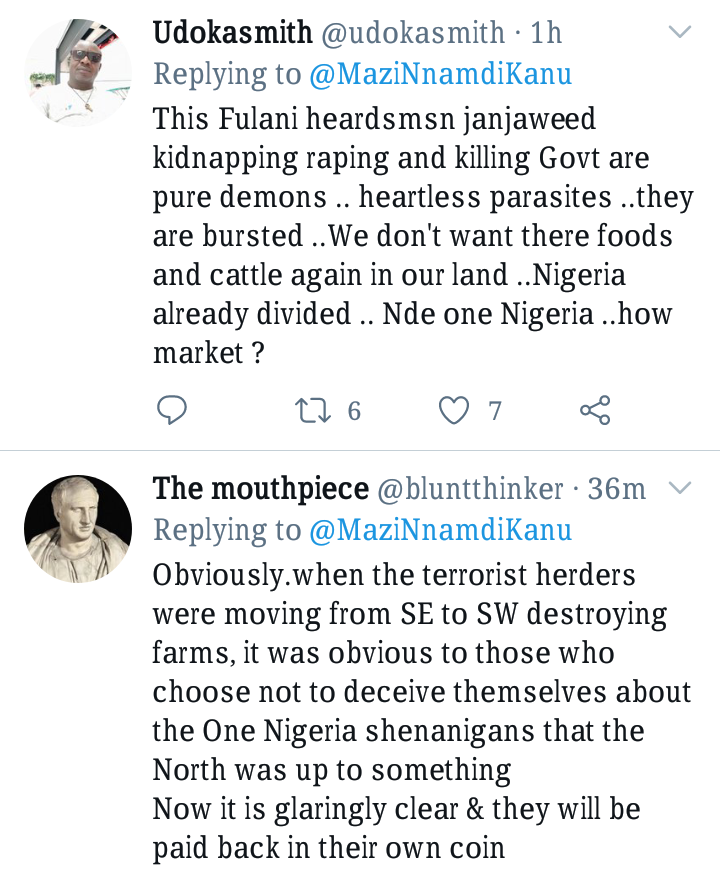 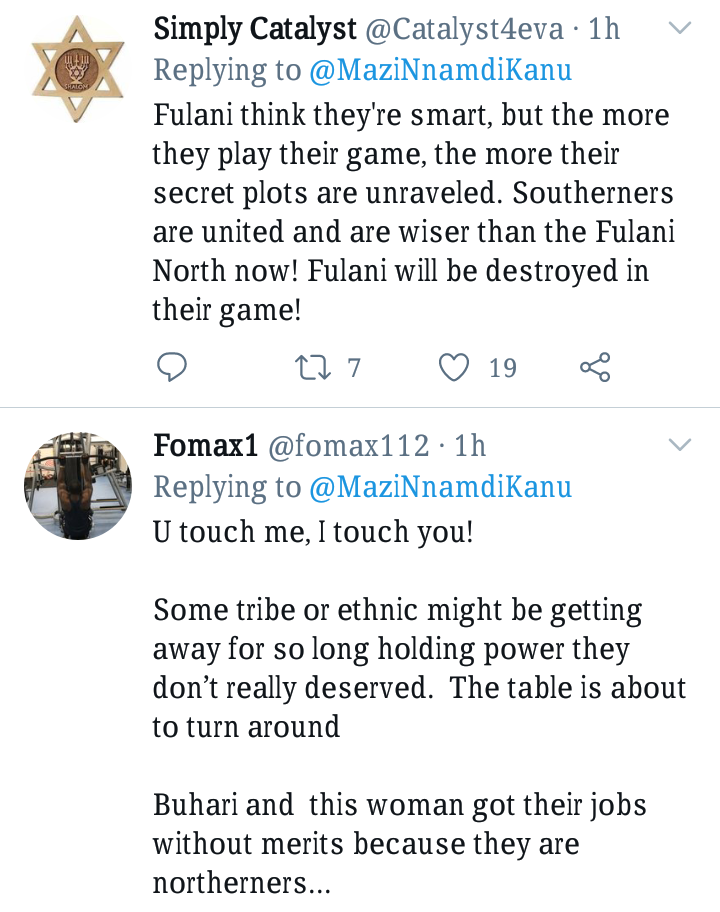 What's your take on this development? Share your thoughts with others on this issue. Who do we blame here for what is happening in the country? 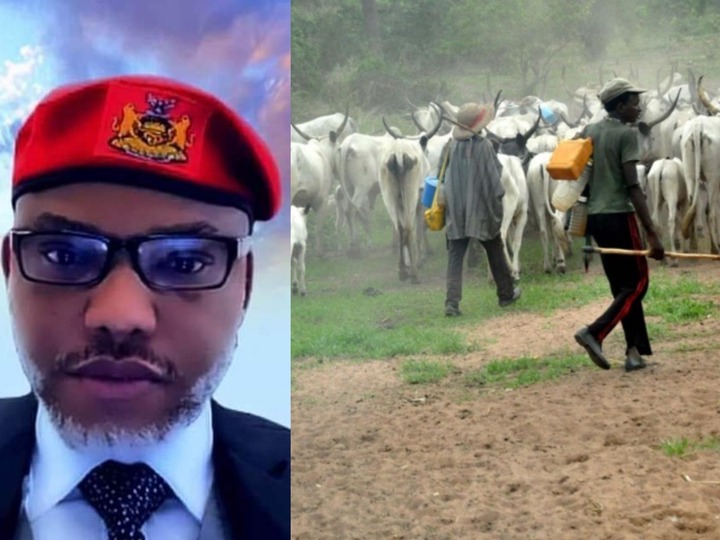 birthday wishes for father frsc recruitment happy new month of march list of davido 2018 songs naira marley pxta
Opera News is a free to use platform and the views and opinions expressed herein are solely those of the author and do not represent, reflect or express the views of Opera News. Any/all written content and images displayed are provided by the blogger/author, appear herein as submitted by the blogger/author and are unedited by Opera News. Opera News does not consent to nor does it condone the posting of any content that violates the rights (including the copyrights) of any third party, nor content that may malign, inter alia, any religion, ethnic group, organization, gender, company, or individual. Opera News furthermore does not condone the use of our platform for the purposes encouraging/endorsing hate speech, violation of human rights and/or utterances of a defamatory nature. If the content contained herein violates any of your rights, including those of copyright, and/or violates any the above mentioned factors, you are requested to immediately notify us using via the following email address operanews-external(at)opera.com and/or report the article using the available reporting functionality built into our Platform 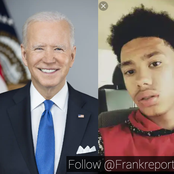 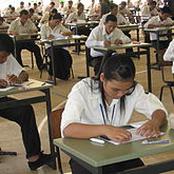 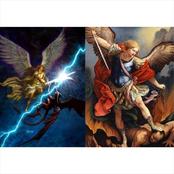 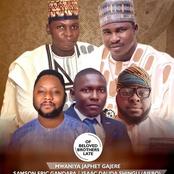 If you are still posting all your happy moments online, here is a message from Spiritualist Adaobi 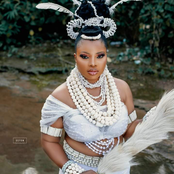 Opinion: 7 Secrets Your Vehicle Mechanic Don’t Want You to Know 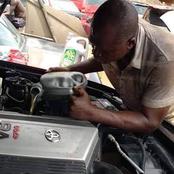 Youths invade the streets of Warri as Tompolo clocks 50 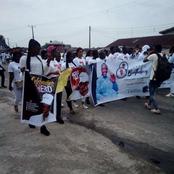 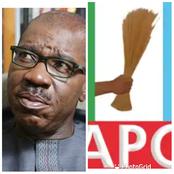 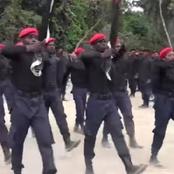 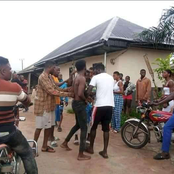