Rochas did not deny giving out N500m, but it was not to IPOB, check out who benefited from the money

By Blusome (self media writer) | 1 year ago

Former Governor of Imo State, Rochas Okorocha has cleared the air on giving the Indigenous People of Biafra (IPOB) the sum of N500million when he was in charge of affairs in Imo State. Rochas Okorocha through his Media aide, Sam Onwuemeodo denied giving IPOB the said amount and also claimed that Hope Uzodinma's administration was just being erratic and shaken by his interview on Sunday night, where he explained his role in calming the rising tension in the state during his tenure. 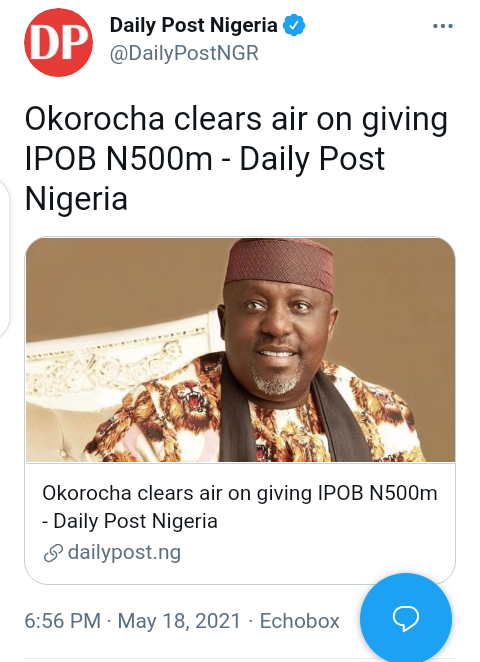 As revealed by his media aide, Daily post revealed that the Governor in his interview section explained how he was able to manage IPOB in Imo state, which eventually led to peace throughout his entire eight-year reign in Imo State.

Sam Onwuemeodo is quoted saying, "Okorocha was talking about how he released the sum of N250million on two occasions amounting to N500m, for an empowerment program for Militants in Ohaji, Egbema and Oguta, an oil region, and they surrender their weapons and accepted to embrace peace. That exactly how peace returned to those areas.

"He also enrolled them and some other youths into the Imo State Security Network (ISN), the Imo state Civil Guard (ICG), the Youth Must Work Programme, and so on. Their monthly stipends being N15,000 and N20,000 per head.

"Rochas never claimed to have given IPOB the sum of N500million. The Imo government is a specialist in chasing shadows and looking for scapegoats."

According to Okorocha Media aide, the Former Governor was misquoted, he never said he funded IPOB or gave them any money, not to talk of N500 million, rather the money he referred to was used to empower the youth in Imo state, which also helps the state achieve peace during his time.

Should we take Okorocha words for it or do you have any reservations? Let's get your comment below.