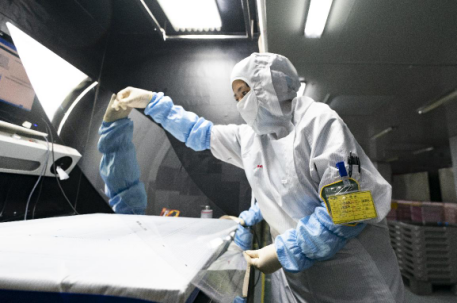 Small and yet powerful products in China’s new materials industry have witnessed rapid growth in sales since the beginning of this year.

Medium and high-end products in the industry, including flexible ultra-thin glass that is 0.12 millimeter thick, only slightly thicker than a piece of A4-sized paper, but can realize 360 degrees of bends, high-performance carbon fiber whose diameter is only one tenth that of a human hair and strength seven to ten times that of steel, as well as black silicon nitride ceramic bearing ball which seems unimpressive but can withstand 600,000 times of friction per minute and high temperatures of over one thousand degrees Celsius, have been particularly popular.

Data showed that the output value of China’s new materials industry increased from 800 billion yuan (about $124 billion) in 2011 to 4.5 trillion yuan in 2019, registering a compound annual growth rate of over 20 percent. The figure is expected to reach 10 trillion yuan by 2025.

On Sept. 8, China’s first 10,000-ton level carbon fiber production base was put into operation in Xining city, capital of northwest China’s Qinghai province. The total annual production capacity of the base is 25,000 tons. 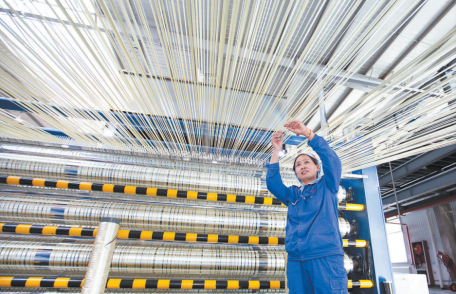 An employee of the branch of Zhongfu Shenying Carbon Fiber Co., Ltd. in Xining, capital of northwest China’s Qinghai province, connects carbon fiber precursors before they are put into carbonization furnace. (Photo by He Yingli)

Known as the black gold of materials, carbon fiber has many merits, including resistance to high temperature, friction, and corrosion, and can be used in strategic emerging industries such as aerospace and wind power generation.

“The production line that turns raw materials into finished products at the base stretches about one kilometer and involves more than 3,000 technical parameters. The whole production process is very difficult,” said Lian Feng, executive deputy general manager of the branch of Zhongfu Shenying Carbon Fiber Co., Ltd. in Xining.

A single production line of the carbon fiber production base can produce 3,000 tons of high-performance carbon fiber annually, according to Lian, who disclosed that the project involves a complete set of independently developed and controllable high-end technologies.

The development of carbon fiber industry in China epitomizes the rapid growth of the country’s new materials industry.

Since the beginning of this year, China National Building Material Group Co., Ltd. (CNBM), founder of Zhongfu Shenying Carbon Fiber Co., Ltd., has enjoyed accelerated growth in the sales of new materials, according to Zhou Yuxian, chairman of CNBM. 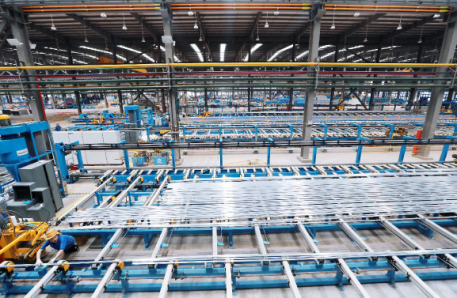 As the world’s largest manufacturer and integrated service provider in the market of building materials and a global leading developer of new materials, CNBM has felt clearly that the country’s expanding high-tech industry has driven the demand for new materials since the start of the country’s 14th Five-Year Plan period (2021-2025), Zhou noted, adding that the constant upgrading of new materials has also extended their application in various industries.

Luoyang Glass Company Limited, a subsidiary of CNBM that specializes in the manufacturing of new types of glass and other new materials, has received orders for all the products produced this year, according to Zhang Rong, deputy general manager of the company. The ultra-white calendered photovoltaic (PV) glass produced by the company largely determines the power generation efficiency of PV modules.

The popularity of the company’s products is the result of its efforts to seize the opportunities brought to the PV industry by the country’s goal of peaking carbon dioxide emissions by 2030 and achieving carbon neutrality by 2060, Zhang said, explaining that the company has carried out research and development and production according to the actual needs of downstream clients.

Grasping the trend in technologies concerning lithium battery diaphragm, a key material in the production of new energy batteries, toward high-energy density, long life cycle, and high-level safety, Sinoma Science & Technology Co., Ltd., a Chinese high-tech enterprise that focuses on the research and development, design, manufacturing and sale of special fiber composite materials, improved the coating formula and process of lithium battery diaphragm and further boosted the performance of lithium battery in terms of heat resistance, safety, and other aspects.

“Our new technologies have won recognition from both domestic and foreign markets, and the production and sales of our lithium battery diaphragm have increased significantly over last year,” said Xue Zhongmin, chairman of the company.

“During the 14th Five-Year Plan period, we will continue marching toward high-end products, mass production, and globalization, breaking through the bottleneck of core technologies, and contributing to the country’s efforts to build independent and controllable industrial and supply chains,” Zhou said.