By Hermizay (self media writer) | 1 month ago 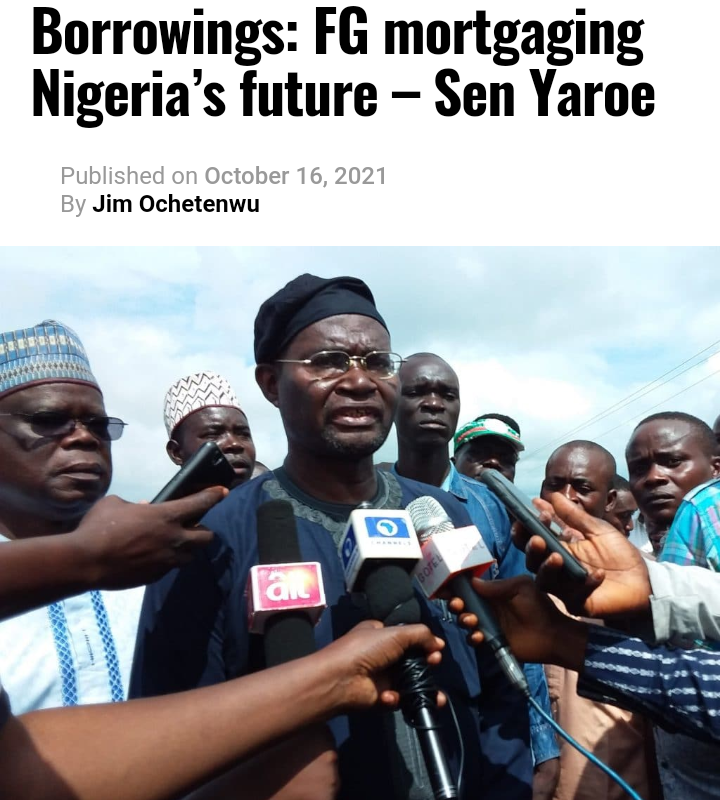 He said that by its excessive borrowing, the Federal Government is mortgaging the future of Nigerians.

Yaroe who spoke to newsmen at his residence in Yola, said efforts by him and other senators of the Peoples Democratic Party (PDP) to stop the decision failed.

“All the arguments we raised for the leadership of the Senate to rescind the retrogressive action fell into deaf ears,” Yaroe said.

The senator added, “Year in year out, this country has been living beyond its means, presenting deficit budgets. From one year to the next, we have been engaging in large scale borrowings to fund the budget deficit.

Why NYSC Scheme Should Not Be Scrapped 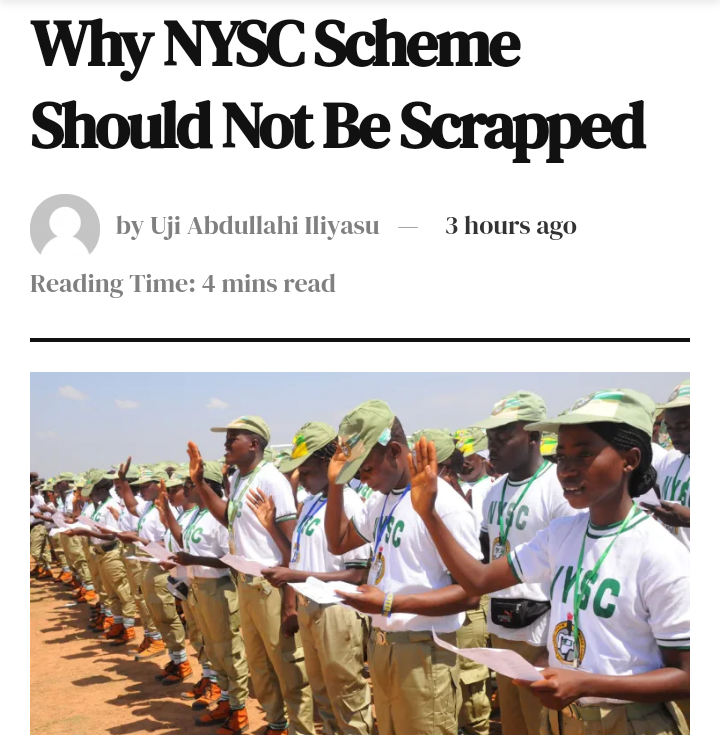 Any Nigerian graduate youth who had passed through the gamut of national youth service love to tell their experiences with nostalgia.

The national service, though faced with its challenges, its prospects far outweigh those challenges.

Recently, some Nigerian opinion moulders, at different fora, spoke for or against the continuous existence and relevance of the scheme. While few individuals criticise the activities of NYSC, most others praise the scheme .

The critics intensified their trade when NYSC certificate began to have a photograph and date of birth of the holder. This little reform out of so many in the scheme, has put fear in criminal elements in the polity, hence the need to scrap the youth programme.

To cover up their real intention for wanting the federal government to discontinue the scheme, they criticize based on their blind fear of insecurity of corps members. They forget that insecurity in the country is not the monopoly of the NYSC alone; it affects all Nigerians and even foreigners resident in the country. Therefore, for a true patriot, insinuating that NYSC is irrelevant in the 21st century due to insecurity of life and property is surely a disservice to Nigerian graduates and our heroes past.

NSCDC arrests herdsman for attacking farmer with machete in Kwara 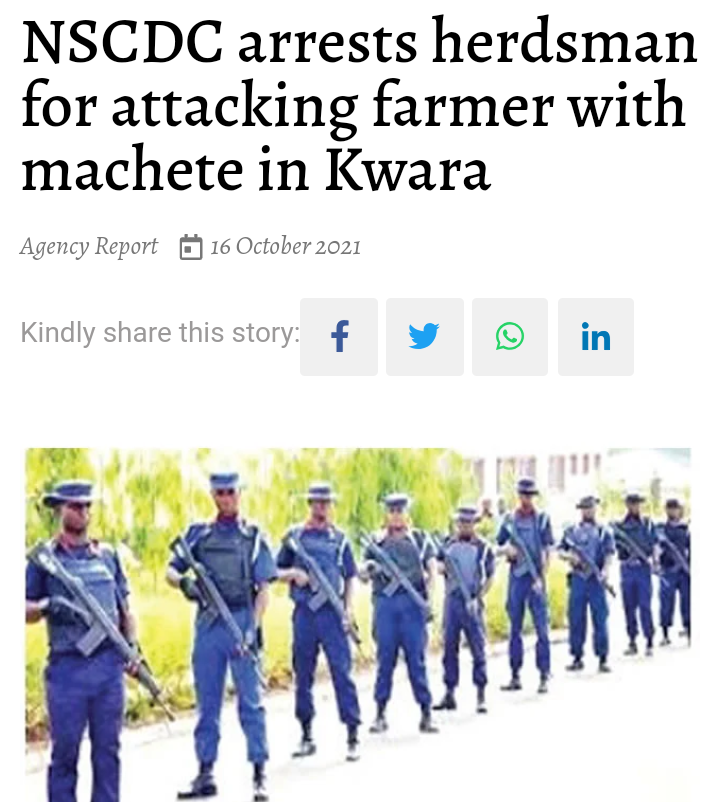 The Nigeria Security and Civil Defence Corps says it has arrested a herder who attacked a 16-year old farmer with a machete.

NSCDC spokesman Babawale Afolabi, in a statement on Saturday, in Ilorin, said that the attack was part of an ongoing misunderstanding between herders and farmers in the local government.

Mr Afolabi said that the matter was reported at the NSCDC Divisional office, Kaiama, and a manhunt was launched for the assailant and his accomplice. They were later arrested.

“There had been a long-term misunderstanding between two families over grazing land, which took a bloody turn recently. 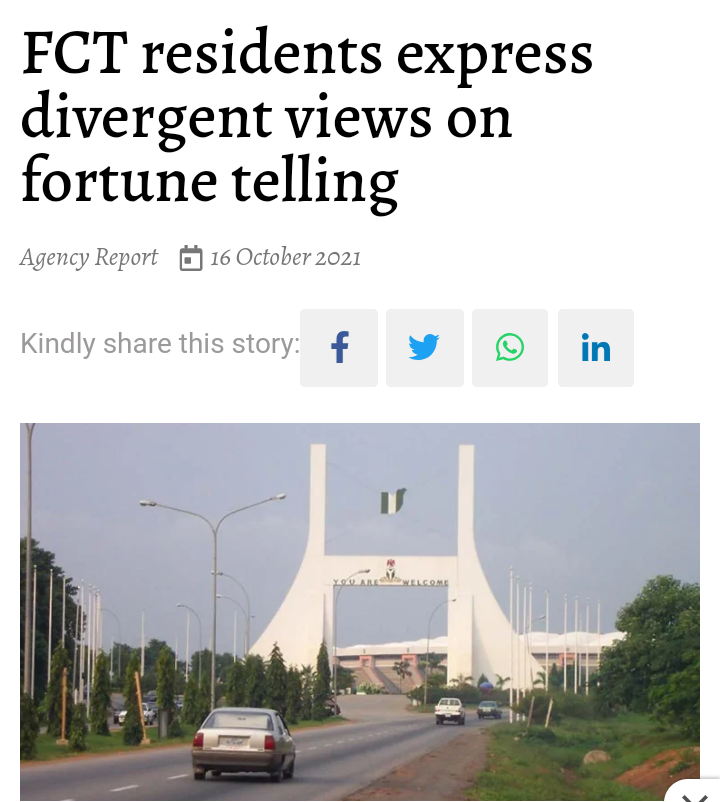 Some residents of the Federal Capital Territory (FCT) have expressed their views on fortune-telling as a way of life and getting assurances for better future.

The residents aired their beliefs on fortune-telling in separate interviews with the News Agency of Nigeria in Abuja.

Many mysteries surround humans and one of the biggest secrets is what the future holds and fear of the unknown.

It is also because of the need to understand the future that people seek fortune-telling services to get an assurance of a better future.

Mr Ojima Okonkwo, resident of Gishiri Community, said some parents seek the services of a fortune-teller to know the reputation a child would bring to the family, saying, “Parents would be more willing to invest in a child that has some fortune.” 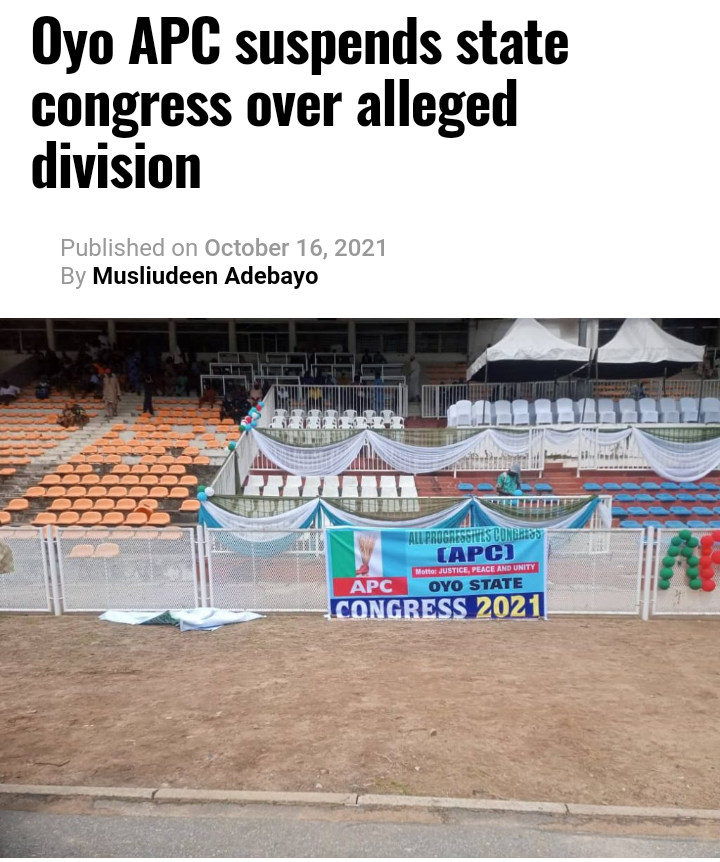 Oyo State chapter of the All Progressives Congress (APC), has postponed its state congress.

The state congress has been scheduled to hold today (Saturday).

But members of the party and journalists who arrived the venue for the event were surprised to learn about the postponement.

The Congress, according to the party has been shifted for one week.

The Publicity Secretary of the party, in the state, Dr. Abdulazeez Olatunde confirmed the postponement to DAILY POST on Saturday.

Olatunde told DAILY POST that the postponement was necessary in order to harmonise.

“It has been postponed.

“It was postponed to allow us harmonise”. 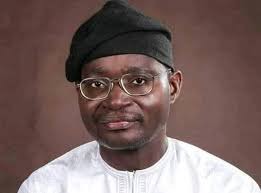