By Temermer (self meida writer) | 19 days 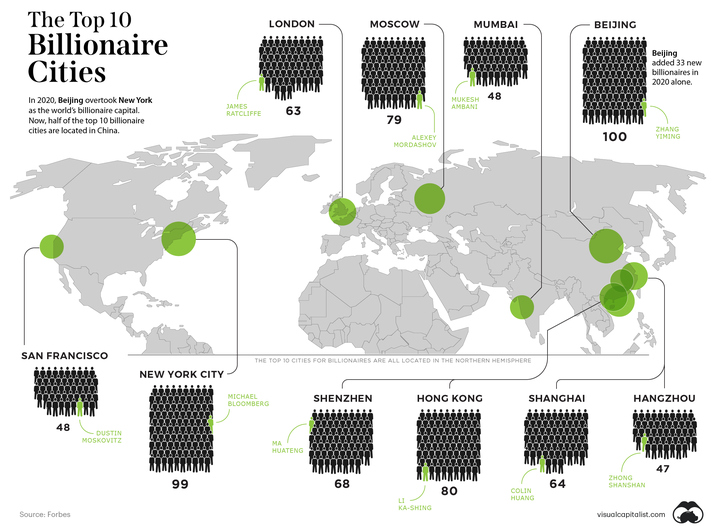 For the last seven years, New York City has been home to more billionaires than any other city in the world. However, last year marked a monumental shift in the status quo.

Beijing has unseated the Big Apple, and is now home to 100 billionaires. That’s one more billionaire than the 99 living in New York City.

Today’s map uses data from Forbes to display the top 10 cities that house the most billionaires.

Where do the Most Billionaires Live?

The richest of the rich are quite concentrated in cities, but some cities seem to best suit the billionaire lifestyle. Here’s a breakdown of the top 10 billionaire capitals and the collective net worth of all the ultra wealthy that live there. 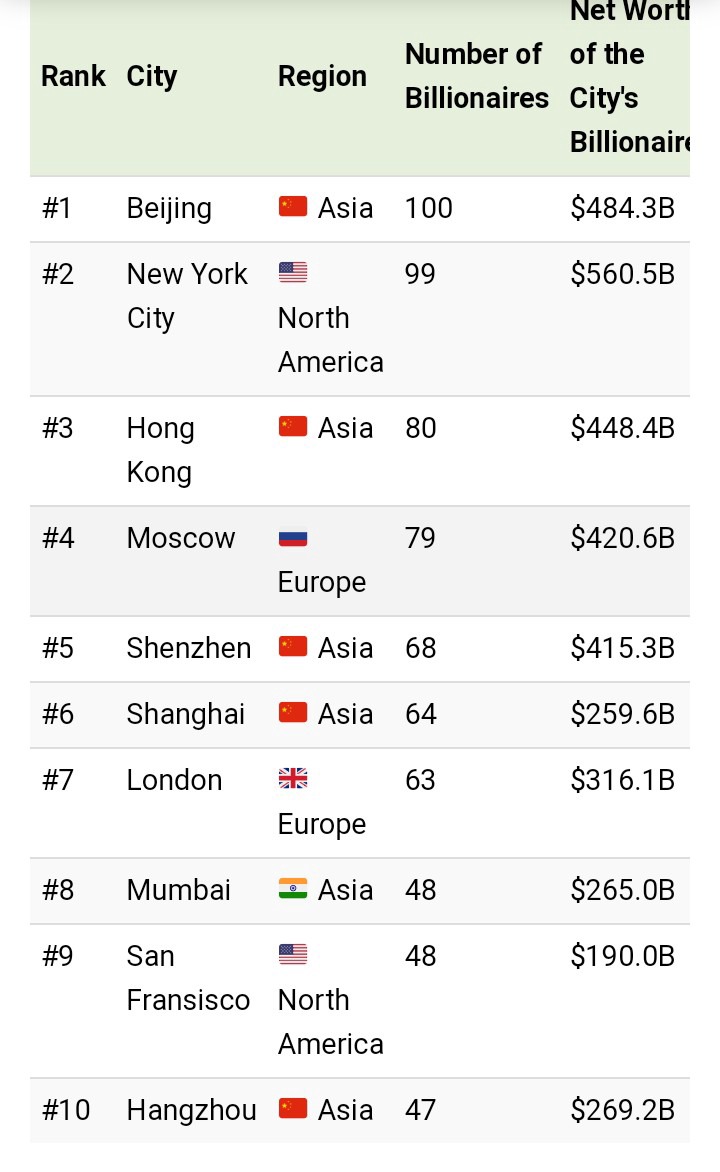 Some cities have some obvious billionaires that come to mind. New York’s richest person and former mayor, Michael Bloomberg, is worth $59 billion. Beijing’s richest billionaire is the founder of TikTok (among other things), Zhang Yiming with a net worth of $35.6 billion.

In terms of the locations themselves, London, New York, and San Francisco are the only Western cities to make the list. Though New York was ousted from the top position last year, altogether the city’s billionaires are still worth more than Beijing’s.

One new city to make the top 10 list of billionaire cities was Hangzhou, the home of Jack Ma. It booted out Singapore from the 10th spot.

More than half of the top 10 cities are located in Asia, providing evidence of the shift eastwards when it comes to seats of wealth. Five of the six Asian cities listed are all in China.

What’s helped lead to this?

The country has seen an e-commerce boom, not in the least thanks to the pandemic. Additionally, the efficient handling of COVID-19 has allowed the economy to get back on track much more quickly than other countries. According to the BBC, 50% of China’s new billionaires have made their wealth either through tech or manufacturing.

Four of the Chinese cities on the list also had the biggest billionaire growth in 2020. Each of them gained more than 10 net new billionaires:

The only other city to gain more than 10 new billionaires in 2020 was San Francisco with 11. Now sitting at 698 billionaires, China is coming up on the 724 held by the United States. Beijing overtaking NYC could be the beginning of a larger tipping point.

Overall, it looks like the wealth tides may be turning as China continues to progress economically and more billionaires become based in the East over the West.

Content created and supplied by: Temermer (via Opera News )