By Ayoolalaitan (self meida writer) | 14 days 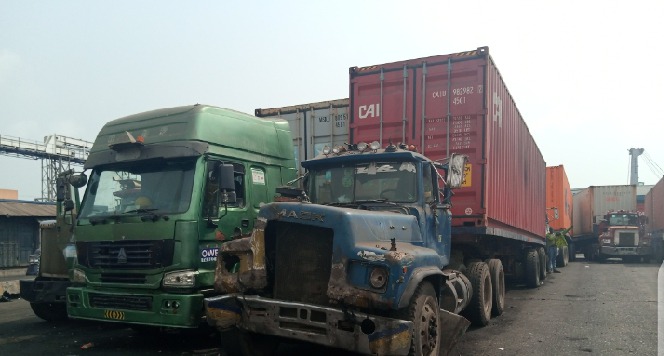 With the increasing volume of activities at the nation's ports and a heavy reliance on trucking for cargo evacuation, it is critical that this threat of rickety trucks and falling containers be addressed as soon as possible.

It has become worrisome and there is a dire need to mitigate these accidents which have led to avoidable loss of several lives and valuable properties. While the increasing number of accidents has resulted in permanent disability or death for Nigerians, leaving a trail of sorrow on the victims and their families, research indicates that the majority of the mishaps were caused by rickety vehicles.

Most of the time, in an attempt to stop a moving truck, security agents throw various objects at it, breaking the side mirrors, headlight, navigator light, and so on, which is not supposed to happen.Truck drivers hang torchlight on the roof of their trucks, which is against safety rules.

Security operatives are most often seen smashing the body of a truck, smashing the windscreen, smashing the headlamps, sometimes they even go to the extent of removing the plate number.

Aside from the road conditions, a number of container-laden trucks plying the Apapa-Oshodi Expressway can be seen with various deformities that frequently lead to these accidents, such as broken headlamps replaced with torchlight, broken tail lights, containers not properly latched or hooked, broken mirrors, non-functional brakes, over-aged trucks, damaged body parts, and a lack of proper maintenance, among other things.

Findings reveal that some truck drivers upon leaving the port tend to unlatch their containers because they are concerned mainly about the truck overturning the container when it enters a pothole or trying to traverse a corner. Most truck drivers believe that when the container is latched onto the truck, it can overturn their trucks, so they would rather allow the container to overturn itself.

Meanwhile, the latching of containers is usually done in the port under the supervision of terminal operators and the Nigerian Port Authority (NPA). It is pertinent to ask what the government is doing to prevent this act?

In a bid to tackle the menace of unlatched containers and erring truck drivers tagged "Operation Scorpion", the Federal Road Safety Corps (FRSC), in 2020 between August and September, arrested and impounded 531 trucks for operating below the Road Transport Safety Standards Scheme (RTSSS) which includes speed device, vehicle documents, standards tyres, locking of containers, driver licenses to mention a few. A number of them were arraigned in mobile court, some convicted and paid various fines.

The recent reported case of a container falling on a vehicle happened in February and March this year, fortunately with no deaths recorded. In February, a container-laden truck fell on a private car in Anthony Village, Lagos, while in March, a 40-foot container fell on three (3) vehicles and a tricycle at the Barracks Bus Stop inward Trade Fair, Lagos.

OPINION: It Is Time For Nnamdi Kanu To Scrape The ESN Outft To Avoid More Loss Of Lives