A French billionaire emerges as the world's richest man

The recent report released by Forbes has placed a French billionaire named Benard Arnault who worths $200 billion as the new richest man on earth. 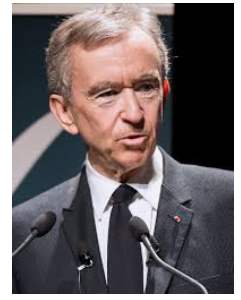 Bernard Arnault is the Chief Executive Officer, CEO, of Louis Vuitton Moet Hennessy (LVMH), a luxury established firm known for its many iconic brands which have made the company a household name.

The latest World richest man has overtaken other world billionaires like Jeff Bezos, Elon Musk, Warren Buffett and Bill Gates who were regarded before this time as the richest men on Earth.

The No 1 richest man, Benard Arnault born on March 5, 1949, started his journey of becoming the world recognized billionaire in 2005 when he was listed as one of the top 10 richest men in the world.

At a young age, Bernard started working under his father Jean Arnault who made a lot of fortune with his construction firm known as Ferret Savinel. The young Benard later became the Chairman of his father's company in 1979 and after 8 years, he changed the Company's name to Ferinel Incorporation and majorly focused on real estate.

Arnault acquired so many luxury brands which include the Italian company Fendi in 2003. In 2010, he bought a French department store, La Samaritaine. In 2011 he bought Bulgari, an Italian Jewelry brand and in 2021, he bought American Jewelry firm, Tiffany & Co.

Content created and supplied by: Nnam (via Opera News )