By Mrliman (self media writer) | 9 days ago

In the last seven months, Emmanual Macron has been all over the place. He has apologized to Rwanda, hosted two Africa summits, hosted another Covid-19 summit, created a Nigeria France economic council, recently apologized to Algeria, and now another summit. Another Africa-France Summit was held on 8 October in Montpellier. Emmanual Macron seeks to rejuvenate relations with Africa. Macron knows he has fallen out of favor with African governments so this time France is taking a different approach. Their target? The people. But to what end? 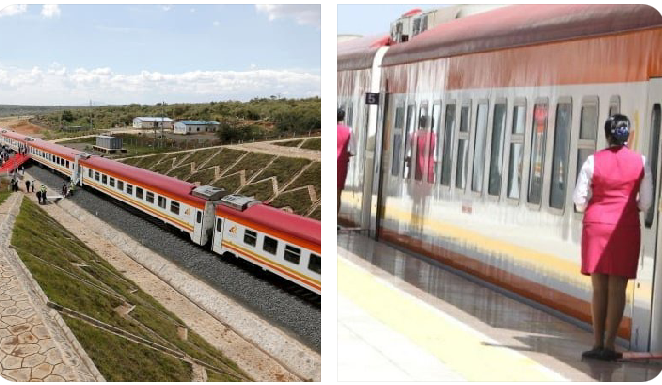 Story: This is a standard gauge rail line built by China in Kenya.

Despite so much francophone Africa under Anglo-Euro hegemony for over a hundred years, there was hardly any development. The only development that has occurred in the last 20 years are by the Chinese and all they did was trade with Africans on an almost equal level, they built dams, rail transportation, bridges, hospitals, ports, and other infrastructure, almost free of charge. Of course, you might say China is acting in her own best interest. What is wrong with that?

African countries have been conditioned by the West to expect free handouts because we are a beggar continent. It has been so wired into the psyche of Africans to expect freebies that when China offers strategic partnership on a "nothing goes for nothing" basis we scream exploitation, invasion, debt trap, imperialism. The Chinese never invaded Africa or overthrew a government. You don't see the British getting this entrenched in African affairs by fire by force. What has Paris done for Africa in half a century? They don't build roads, no rail system, no FDI, no alleviation of poverty, Paris engagement with Africa is military-centric. Why?

The British used to call it "the Great Game" the military and political jockeying of great powers. France has played its "Great Game" in western Africa for 150 years. Now it's losing while Islamist extremists are winning. Other big players, like Russia and above all China, are moving in. Suddenly France is hosting summit after summit with Africa. The people of francophone Africa are hungry for a change. France, which uses the Euro set up a West African currency, the CFA Franc backed by the French central bank. But each country has to keep half of its currency reserves in the French bank. How sad is that?

France is the oldest democracy in Europe. One would think they would extol that virtue in Africa. But rather than reinforce democratic institutions, the operations in West Africa have been capped by not one but Seven military coups d'états. Two in Mali last year alone. They could compete with China for economic influence. They could offer trade. Instead, Paris's only strategy is via military means. Nuclear power is the largest source of electricity in France. It's the highest percentage in the world. The Uranium used to generate nuclear power is gotten from Niger. The least developed nation on earth relies on Nigeria for electricity generation.