7 African Countries With The Weakest Currencies In Africa In 2021

By AllnewsKY (self meida writer) | 10 days 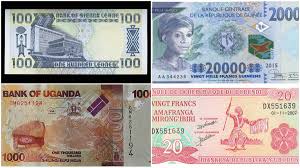 There is no nation on the planet earth that can achieve it national goals without money or currency. This is because money is the lifeblood of any nation. It quickens development and strengthen the standard of life of citizens.

Meanwhile, there are about seven African countries with the weakest currencies as reported by YEN.com.gh on African list they have compiled for 2021.

As reported by Lowestcurrencies.com, the weakest currency on the continent of Africa is Leones. The one leones equals 9797.40 US dollars. Even though the country is blessed with a lots of mineral resources, their economy is still redundant. The second country with the weakest currency is Guinea Republic. Every one Guinea Franc is equal to 9665.68 dollars. This country is also blessed with many mineral resources in addition to fertile soil. But poverty is still rocking the country. The fourth African country with the weakest currency is Uganda. As it stands, one dollar is equivalent to 3729.02 of Ugandan shilling. The country is still struggling to take shape after about two decades of insurgency that roped their economy.

Tanzania is the fifth African country that has weakest currency in Africa. The country is popular because mountain Kilimanjaro is located there. Nevertheless, a dollar is equivalent to 2318.03 Tanzanian shilling. It is worth note that there's good tourism in that part of the world. The historical anarchy in Burundi that was caused by wars between Hutu and Tutsi has dampen the economy the country. Currently, Burundian Franc is the sixth weakest currency in Africa. The exchange rate of the country's currency is one dollar to 1926.56 Burundian Franc.

The least and the seventh country considered to have the weakest currency in Africa is Democratic Republic of Congo. DRC had also suffered from civil war. It is rich in natural resources, but its economy is in shambles. A dollar is exchanged for 1897.36 CDF.

However, YEN.com.gh had earlier reported that Libyan Dinar, Tunisian Dinar, Moroccan Dirham, Eritrean Nafka, Egyptian Pounds and Ghanaian Cedi are among the seven strongest currencies in the continent of African.

Opinion: How Barcelona Could Line Up Against Athletico Bilbao Tonight In Copa Dey Rey Final And Win

"Don't Compare Me With Those Rats, I Make Millions Daily" Bobrisky Boasts About His Riches

A 29-Year-Old Man Kills His 19-Year-Old Creditor In Anambra, Check Out What Happened

Let's Embrace Keyamo's Claim That Insecurity Is A Global Phenomenon