By WaterNewsGo (self media writer) | 11 days ago

The National Association of Nigerian Students (NANS) has called for the immediate sack of the Minister of Education, Mallam Adamu Adamu over his role in the ongoing strike action by the Academic Staff Union of Universities, ASUU. 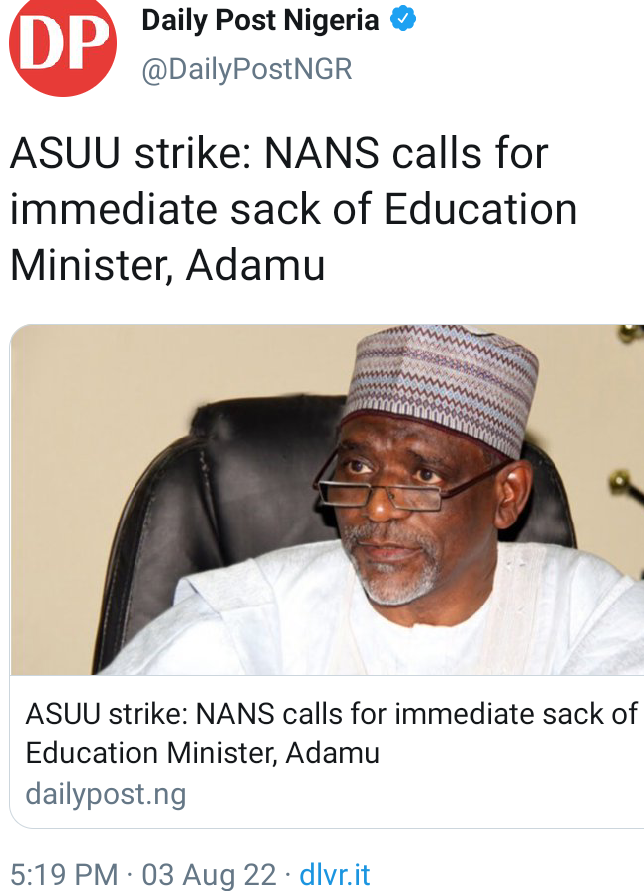 ASUU had on Monday, extended its industrial action embarked upon on February 14 by another four weeks as the Federal Government is yet to meet the demands.

NANS President, Sunday Asefon, in a statement, on Wednesday, asked President, Muhammadu Buhari, to sack Adamu over what they described as gross incompetence.

The NANS president alleged that the Minister lacks compassion and empathy for Nigerian students, stressing that ASUU had gone on strike for at least 18 months since he assumed office.

Tinubu’s Govt Will Be Fair To All—Shettima

The vice-presidential candidate of the All Progressives Congress, Senator Kashim Shettima, has assured Nigerians that when elected, Bola Tinubu’s administration would be just and fair to all Nigerians, irrespective of tribal, religious and political affiliations. 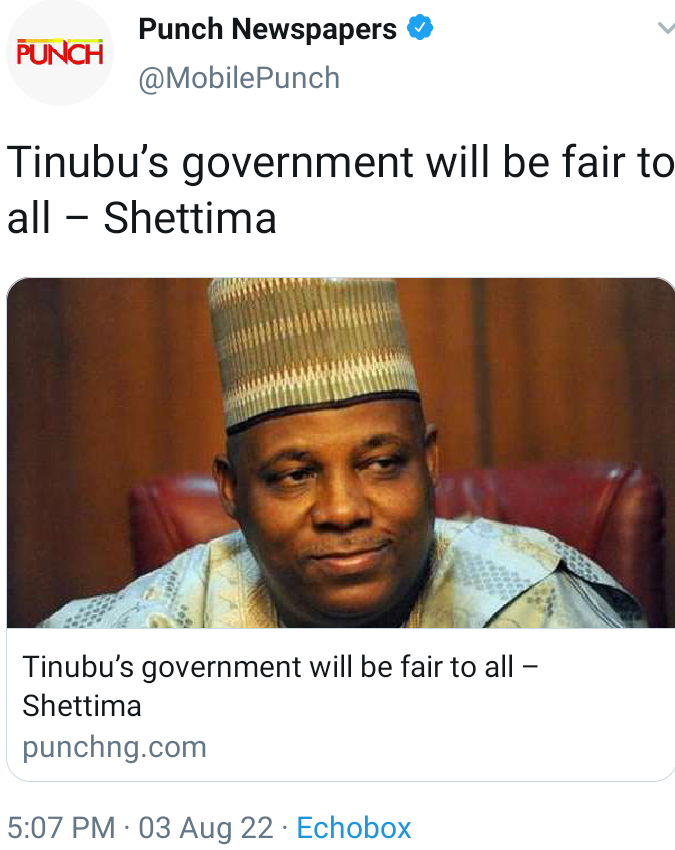 Shettima stated this on Tuesday at the one year memorial service for Dr. Emmanuel Abiodun, father of the Ogun State Governor, Dapo Abiodun, which was held at the St. James Anglican Church, Iperu-Remo, Ikenne Local Government Area, Ogun State.

He said, “We need to build a new nation because the hope of the black man is in Nigeria. The onus is on us to secure the future of our children yet unborn.

Tinubu will present his manifesto at the right time — Campaign DG, Oshiomhole

The Director-General of the All Progressives Congress, APC, presidential candidate, Asiwaju Bola Tinubu campaign organisation, Adams Oshiomhole, has said the fact that Tinubu has not spoken about his plans for Nigeria is not an indication of weakness. 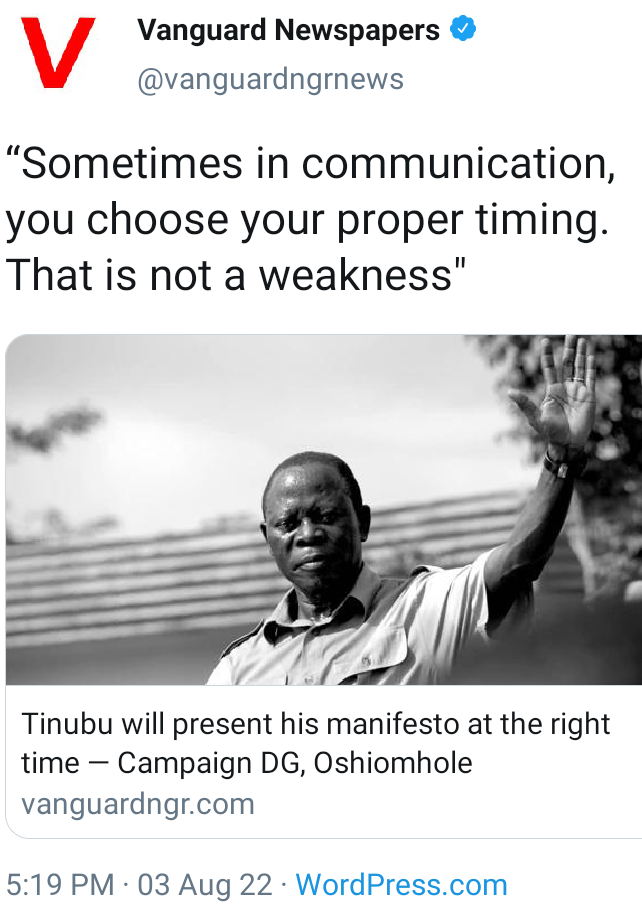 The campaign DG, who spoke during an interview on ‘The Morning Show’ of Arise TV, noted that the fact that Tinubu has not spoken does not mean he does not have a position.

Oshiomhole stated that Tinubu is considering the proper time to speak on his plans.

FG Confirms Purchase of N1.4 billion Worth Of Vehicles For Niger Republic

The Federal Government has confirmed that it has purchased vehicles worth N1.4 billion to help Niger tackle insecurity.

The Minister of Finance, Budget, and National Planning, Zainab Ahmed gave the confirmation on Wednesday, explaining that providing intervention to the neighboring Niger Republic is not new and it is the prerogative of President Muhammadu Buhari who approved the purchase. 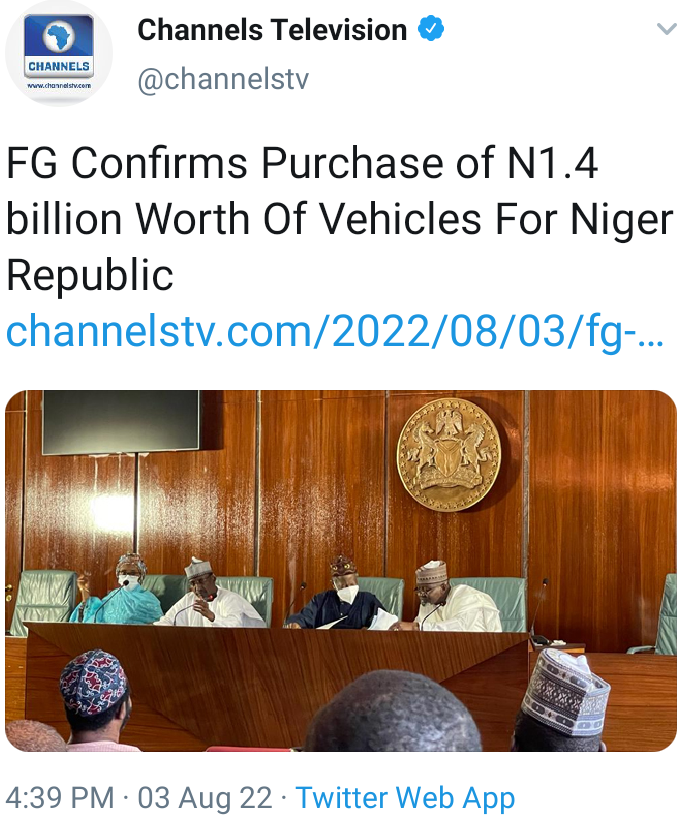 According to her, President Buhari, whose actions she cannot question, has the right to make his own assessment of situations and give directives accordingly. 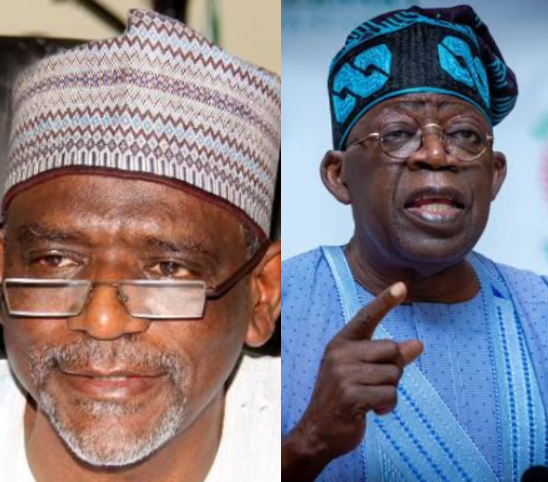