By AkwaIbomInformationMinistry (self media writer) | 7 months ago 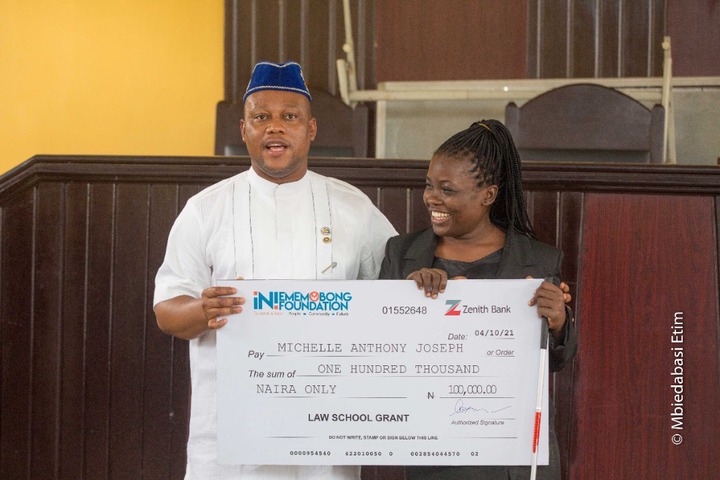 Shrills of excitement rent the air as the Ini Ememobong Foundation (IEF) doled out more scholarship grants to one first class graduate, two physically challenged graduates, and one other female beneficiary, all graduates of law, from the Faculty of Law, University of Uyo.

The ceremony, which took place yesterday, Monday, 4th October, 2021, at the Moot Court building, Faculty of Law, had lecturers and students, give commendations as they took turn to received their cheques.

Making the presentations to the beneficiaries, the Akwa Ibom State Commissioner for Information and Strategy, and Chairman of IEF, Comrade Ini Ememobong, said that the gestures were in line with the foundation's core values, which he said is taking humanitarian services to where it is mostly needed. 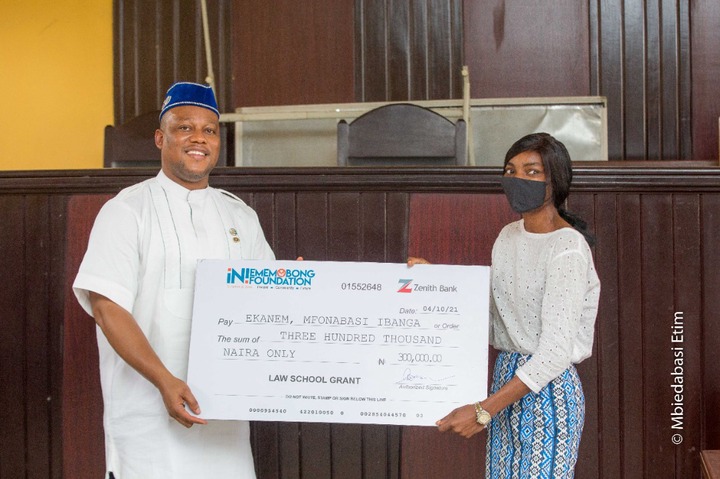 He also stressed that the grants were in recognition of the beneficiaries' academic excellence as well as the need to continue to support them to "finish strong ".

Recalling his experience as an undergraduate in the same faculty, the Commissioner said, " During my days as a student of this faculty, there were some colleagues of mine who were very intelligent but had challenges paying their fees and buying books, while others did small businesses to sponsor themselves through school, and in that process, they missed some lectures, which eventually affected their academic performance. Therefore, we at the foundation have made it a duty to identify such students and support them financially, so that they can concentrate on their studies ".

"As a lawyer too, I know that seniority is not only demanding respect from the juniors, it is also giving back to them as well as guidance and mentorship ". He added .

According to Comr. Ememobong, " These gestures are not for showmanship, but to encourage you, and to also create a covenant between you and God, that when you are elevated, you will pick another person up, because there will always be a person in need of a helping hand ". 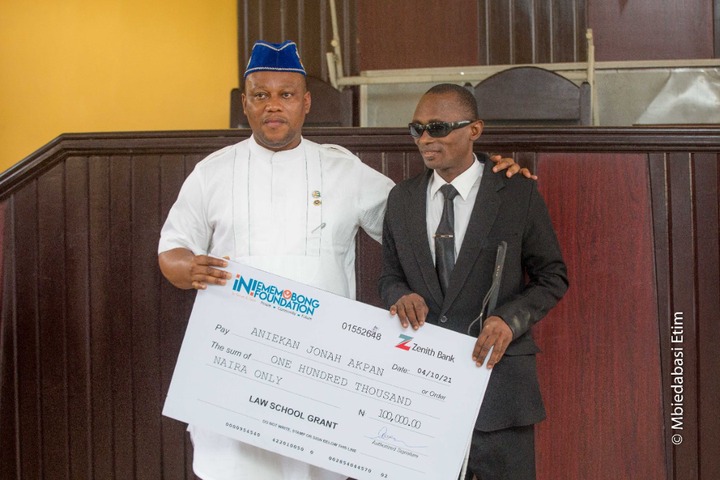 On the promotion of culture of excellence among students, Ememobong emphasised that, " We cannot condemn vices if we are not promoting virtues, and there is no other virtue that we can promote in an academic environment other than the virtue of hard work, which is evidenced in your results ".

The Chairman of the foundation called on the beneficiaries to maximise the opportunity offered them to pursue academic excellence, and eschew frivolities as that would only lead them to disappoint their parents, the faculty and the society at large.

The Dean of the Faculty of Law, University of Uyo, Prof Aniedi Ikpang, hailed the gestures, and described it as exemplary, adding that it was a rear display of humanity towards the beneficiaries, thus rekindling their hopes of further studies.

Also reacting, a Senior Lecturer in the faculty, Dr. Idoreyin Eyo, commended Comr. Ememobong for the grants, intimating that the criteria for the selection of the beneficiaries were independently decided and handled by the faculty without any external interference or influence, thus lending credibility and transparency to the exercise.             She called on other alumnus of the faculty to emulate the feat done by the IEF, and give back to the faculty and students, who may be in need of one assistance or the other. 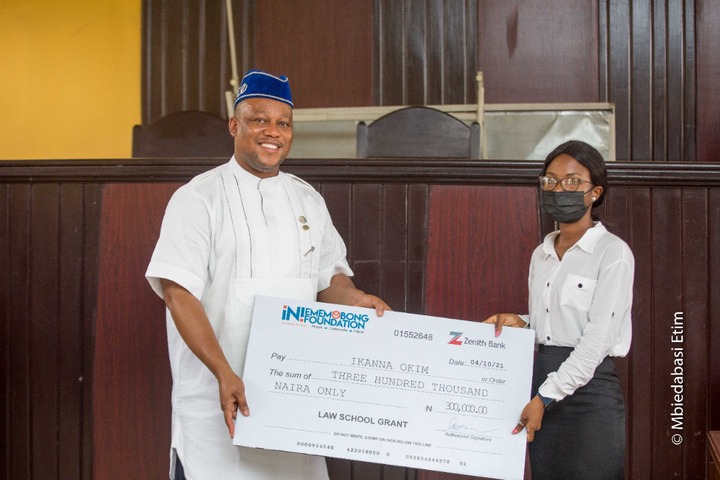 Speaking on behalf of the beneficiaries, a first class graduate of Law from the faculty, and a 2021 Law School hopeful, Miss Ikanna Okim, thanked Comr. Ememobong for his magnanimity, and pledged to put in more efforts in her further studies in order to replicate her first class performance during her law school programme.

Highpoint of the event was the presentation of cheques to each of the law graduates.