Chief Aare Afe Babalola sets up a university in fulfillment of a life-long dream.

By Lastica (self media writer) | 1 year ago 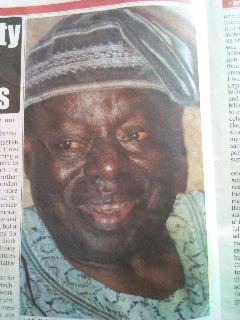 As a young man, Aare Afe Babalola loved (and still loves) the simplicity of the rural farm settlement. Replete with an uninterrupted opportunity to practise farming, a profession he met his father engaged in and which in many respects he regarded as one of the noblest in the world, he could not have asked for more. Education was certainly not an option because he never liked school. In any case, it was, to him, not the preserve of people with so poor a background like his. That was until a missionary catechist persuaded his father to send him to school like some of his agemates.

Once in school, Babalola found that the classroom offered more engaging new world of knowledge too rich to be true. There was, for him, no turning back even when it became clear that he would not be able to go beyond Standard 6, following his father's death. Through private study, he went ahead and later obtained a law degree from the London University. The experience, he said, left him with a life-long dream to create a platform for the less privileged who genuinely seek education to do so. On 1st October, the path to realising the dream came closer to fruition, as Engineer Segun Oni, former Governor, Ekiti State, turned the first sod of the Afe Babalola University, opposite the Federal Polytechnic, Erifun, Ijan road, Ado Ekiti. "I am quite a happy man but a man's happiness is not full if he fails to make others happy. I gained so much from education and it makes me happy. I have to extend it to make other people happy too. I think I can make people happier still if they can get qualitative education," Babalola explained.

For Babalola, the university is not going to be just one of numerous institutions of higher learning springing up in every nook and cranny across the country. It would, he said, be a home away from home as those who would engaged to impart knowledge to students would be teachers who are in the profession not just to fill out time but out of true love. As part of the need to ensure that the university would not end up like others, Babalola commissioned a research to find out why public universities perform below optimum. Among other things, the research indicated that those entrusted to run the institutions lack the commitment to do so. As a result, most of them would not mind embarking on strikes that often left academic activities totally paralyzed.

Most importantly, the research findings concluded that private university holds the key to the survival or revival of academic excellence in the country which has been on the decline for decades. And with his background as an astute administrator, Babalola is certain that he can deploy his wealth of experience to turn his university to one of the best in the world. "I believe that this country's future of having a university among the best 1,000 in the world lies on private universities. My wish is to establish a world class university which will be manned by committed teachers who share my views and my ideals. That is the reason I want to set up a university," he said.

Content created and supplied by: Lastica (via Opera News )