A Master's Degree Holder Explains Why He Became A Scavenger

In those days, one beautiful thing about education was that, as soon as you're done, there is a better job and a better life waiting for you but these days, the reverse seem to be the case.

The condition of the country have seen many educated people being poor and unable to afford a good living because of no employment. What makes it worst is if one decides to fold hands and not start a little business to help himself.

A Master's degree holder who goes by the name azid Surajo, spoke with Daily Trust newspaper where he explained to them why he became a Scavenger even though he is well educated. Surajo said he has master’s degree in Development Studies from the Bayero University, Kano State but decided to become a scavenger after he could not secure a white Colar job. 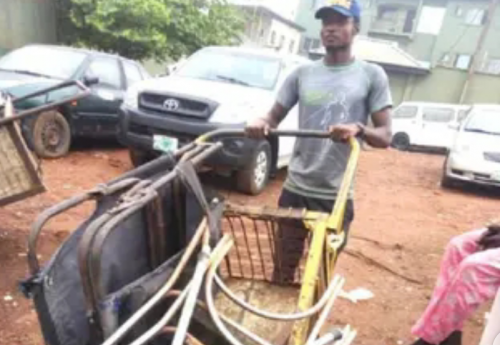 He said that he completed his NYSC in 2016 and ever since, he has been trying to get but to no avail. He said he got to know that securing a job in this country requires connection because he has been applying for government jobs but nothing.

He said he has applied for Airforce, Navy, Police, many to mention but few, yet nothing has worked out. He even said the last one he applied for was NDLEA were he was kept mute even after he wrote the aptitude test.

Surajo said he was frustrated but did not want to stay idle so he decided to do something to help himself. He joined his childhood friends to go to lagos where he joined to scavenger business. He narrates that their master will give each of them money to use to buy condemn items and by the end of the day, they bring the items to their master who will Inturn weigh it and then take out his money and give you back your gain.

He said after two years, he is now used to the job and he loves it. He shared that he's looking to modernise it because of how lucrative it is. Surajo urge youths not to stay idle rather they should get something doing while waiting for the big catch.

Sometimes, life can be so though on you that even your degree cannot help you. Please when you see someone struggling, don't loo down on them. They may be graduates trying to survive.

VIDEO: Pastor Chris Provides An Answer To What Happens To One's Soul And Spirit When They Die

Vee Blast Fans Who Are Dragging Her Over The Reply She Gave Kiddwaya, Read What She Said

Are You Feeling Bored? See Funny Pictures & Jokes That Will Make You Laugh