Which Language is The Most Difficult For People to Learn? (Opinion)

By Handsome_GHETTO (self media writer) | 2 years ago 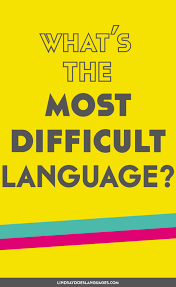 The answer for one individual may be completely different for another. This is true even among speakers of the same native language. One English speaking individual may pick up Korean relatively quickly while that same person may have trouble grasping Japanese. Yet another native English speaker may have no trouble picking up Japanese but find it nearly impossible to learn Korean.

Languages like Arabic, Mandarin and Japanese utilize a completely different writing system which adds a layer of difficulty for native English speakers. While learning a new, exotic writing system can add to the challenge, it does not necessarily make a language more difficult. Grammar and sentence structure often play the largest role in perceived difficulty.

Adding another layer of complexity is culture. One of the best techniques a person can use to speed up their language acquisition is cultural immersion. Many students working hard to learn a language will immerse themselves in the culture of the language. This involves listening to music, watching movies, TV shows, listening to radio programs, even browsing websites in the foreign language. By immersing yourself in the culture, you can speed up the time it takes to pick up a language considerably. It’s one of the first things language teachers recommend to new students.

The complexity arises when the culture of the language is alien to language students. For example, Norwegian, German or Dutch culture would be much more familiar to a native English speaker than Arabic, Korean or Hindi. If a person is having a lot of difficulty understanding the culture of the language they’re trying to learn, there will be a higher chance of culture shock which can turn a person off entirely.

There are 5 languages in contention for the title of “most difficult”. Those languages are Korean, Cantonese, Japanese, Arabic and Mandarin. While they require roughly the same length of time to gain fluency and comprehension, one language just slightly edges out the other four. According to the NVTC and the Foreign Service Institute, Japanese is, on average, arguably the hardest language for an English speaker to learn.

Content created and supplied by: Handsome_GHETTO (via Opera News )