See the history of vice-chancellor of the University of Ilorin, Prof. Sulyman Age Abdulkareem

By Horlskew (self media writer) | 2 years ago 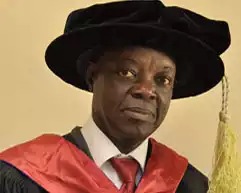 Prof. Sulyman Age Abdulkareem (SAA) was born on 21st January 1954 at Oro town, Irepodun Local Government area of Kwara State. He attended the Government Secondary School, Ilorin, for both his secondary school education and the Higher School Certificate (HSC) from 1968 to 1974, which he undertook with a Kwara State Government Scholarship.

He later got the Federal Government Scholarship for his university education at the University of Detroit, Detroit, Michigan, U.S.A. between 1975 and 1980. At the end of the course, he came out in flying colours and was awarded the MChE, BChE (Chemical Engineering) specializing in Heterogeneous Catalysis/Reaction Engineering.

From 1985 to 1988, this high-flying intellectual was awarded the United States of America National Science Foundation Fellowship for his Ph.D programme in Chemical Engineering at the University of Louisville, USA. He also completed his Ph.D in flying colours and obtained the Engineer-In-Training Certificate of the State of Minnesota, USA in 1991. He became a Registered Engineer of the Nigerian Society of Engineers in 2002 and a COREN Registered Engineer in 2004.

A consummate researcher and thorough-bred academic, he has a lot of inventions and has many Patents to his credit. These include:

With 39 publications in highly journals, and about 49 Research and Development Technical Papers, Prof. Abdulkareem has attended and presented incisive papers at 57 major conferences/workshops both locally and internationally.

From June 2010 to June 2015, Prof. Abdulkareem was Vice-Chancellor of Al-Hikmah University, Ilorin.

A service oriented patriot, Prof. Abdulkareem has also made his impact positively felt in a number of services to the community. For instance, he is the Inventor and Initiator, Non-patented Sachet Water Business Establishment in Nigeria, a business initiative that is worth over N7 billion naira daily, according to NAFDAC (1995); Team Leader, Durable Hydrophilic Web Formation – 3M Company, St. Paul, Minnesota, USA (1991); Lead Engineer, Methanol to Olefin Catalytic Project, King Fahd University of Petroleum and Minerals, Kingdom of Saudi Arabia (1993 – 1994); Lead Engineer, Alpha Olefins Oligomerization Project, $4oo million scale-up project co-sponsored by SABIC and KFUPM, Kingdom of Saudi Arabia (1993 -1994); Co-opted Member, Committee on the Establishment of Kwara State University by the Kwara State Ministry of Education, Science and Technology (2007); and Facilitator, Unilorin Campus Mini-Bus Services in Conjunction with the Students’ Union (2008/2009 Session).

The erudite scholar and astute administrator is married to Hajia Falilat Abdulkareem and they have six children.

Content created and supplied by: Horlskew (via Opera News )