Not all Nigerians are FRAUDSTERS, meet Charles Egbu, an Igbo man who sets a RECORD in the UK

By Ilerison | self meida writer
Published 7 months ago - 0 views Not all Nigerians are FRAUDSTERS, as another IGBO MAN Pof. Charles Egbu becames a VC in the UK

Indeed, this life is "not balance", while others engaging in criminality, thereby tarnishing the already sore image of Nigeria, majority are legitmately working theirselves out to have better lives and put the name of our dear country on the world map for the good reasons.

Yet, they labelled us FRAUDSTERS and CRIMINALS because of this little portion of us that are tarnishing the image of the country, the international community forgot to acknowledge the good and extra ordinary Nigerians that have done great things to the mother earth, and are still doing it.

Instead, the media promote the negative news over the great and positive ones, forgotting that NOT ALL NIGERIANS ARE CRIMINALS or FRAUDSTERS or ABETTORS of dirty politicking and corruption, NO!!!. Some of us are Scholars, inventors, Nation builders, and the salt of this world. 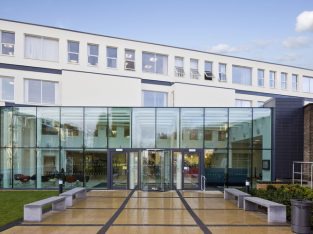 One of us, one of those people is the IGBO man from Anambra state, an academian and an achiever, permit me to introduce you to Professor Charles Egbu, a Nigerian by blood, by water and by everything, who defied all odds and became the BLACK, not the first African, but anyone with a black skin colour.

Whether he is a United Kingdom citizen or an American citizen, but is black, has never became a Vice Chancellor of any University or College in the United Kingdom, until Professor Charles Egbu came and broke the jinx and set the record! Professor Charles Egbu in his acceptance message said: “I am honoured to be joining Leeds Trinity; a University who’s values and ethos around widening participation, offering a personalised approach and encouraging all students to achieve their best, align with my own. The University has an impressive track record in learning, teaching and employability, and I am looking forward to building on the strong foundations established under the leadership of Professor House.

“I have already been impressed by the sense of community at Leeds Trinity and I am looking forward to engaging with students, colleagues and alumni as we shape the future strategy of the institution. I am also looking forward to returning to Leeds; the city in which I spent much of my early academic life.” the newly appointed Vice Chancellor concluded. Professor Charles Egbu is happily married with four children. He has a PhD in Construction Management from the Univeristy of Salford and an advanced Diploma in Research Award Supervision (APDRAS) from Leeds Metropolitan University.

Content created and supplied by: Ilerison (via Opera News )

akure news big brother naija housemates evicted latest news on bbnaija 2019 mtn share and sell code unizik admission list
Opera News is a free to use platform and the views and opinions expressed herein are solely those of the author and do not represent, reflect or express the views of Opera News. Any/all written content and images displayed are provided by the blogger/author, appear herein as submitted by the blogger/author and are unedited by Opera News. Opera News does not consent to nor does it condone the posting of any content that violates the rights (including the copyrights) of any third party, nor content that may malign, inter alia, any religion, ethnic group, organization, gender, company, or individual. Opera News furthermore does not condone the use of our platform for the purposes encouraging/endorsing hate speech, violation of human rights and/or utterances of a defamatory nature. If the content contained herein violates any of your rights, including those of copyright, and/or violates any the above mentioned factors, you are requested to immediately notify us using via the following email address operanews-external(at)opera.com and/or report the article using the available reporting functionality built into our Platform