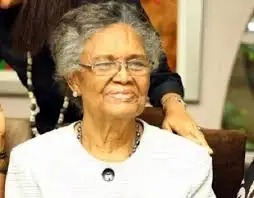 As a young student writing the Joint Admission And Matriculation Board (JAMB) exam to get into the University years ago, i remember that this woman's name rang a bell.

Prof. Alele-Williams made history as the First Nigerian Female Vice-Chancellor at the University of Benin.

She was also the first Nigerian woman to receive a Doctorate Degree.

She was respected a lot.

The name made you behaved properly if you were in the wrong.

The name inspired student to get their acts right and become their best selves, or be thrown out of the system.

Many parents deliberately wanted to send their children to the University of Benin (UNIBEN) because 'Madam Grace' was there.

If the child in question wasn't studios, they learnt when they got to UNIBEN. If you were a student in UNIBEN during the days of Grace Alele-Williams, you wouldn't want to get into the wrong side of the law.

You either shape up or you shape out. And the powerful woman at the helm of affair was an incorruptible judge; you couldn't compromise her!

She tackled corruption in the school system and fought it to a standstill. She came out hot against cultism and sent the trouble makers running into hiding with their tails between their legs.

In her own words concerning cultism, during a TV interview several years after she had left UNIBEN, the erudite professor stated empahatically: "I dealt with it(cultism)".

When Grace Alele-Williams was the Vice-Chancellor of UNIBEN, she made women proud. She made Nigeria proud as well.

Her teaching career started at Queen's School, Ede, Osun State, where she was Mathematics teacher from 1954 until 1957. She later left for the University of Vermont to become a graduate assistant and later assistant professor.

Between 1963 and 1965, Grace Alele-Williams was a post-doctoral research fellow, department (and institute) of Education, University of Ibadan.

She was appointed a Professor of Mathematics at the University of Lagos in 1976. In her career, she has held and served in various capacities, making useful contributions in the development of education in Nigeria.

Amongst others, Grace Alele-Williams was a member of the Governing Council, UNESCO Institute of Education and consultant to the United Nations Educational, Scientific and Cultural Organization (UNESCO) and Institute of International Education Planning.

Between 1963 and 1973, she was a member of the African Mathematics Programme, located in Newton, Massachusetts , United States.

Prof. Grace Alele-Williams was the VC of UNIBEN from 1985 to 1991, and left a positive mark in the annals of the school and in the Nigerian education system in general.

She has won many awards, which include Order of the Niger 1987, Fellow of the Mathematical Association of Nigeria and of the Nigerian Academy of Education; Merit Award Winner of Bendel State in Nigeria; and Regional Vice President for Africa of the Third World Organization for Women in Science (Science in Africa: Women Leading from Strength AAAS, Washington) 1993.

This is a woman who came, saw and conquered due to her determination, academic brilliance, forthrightness, fearlessness in the face of opposition, and strong will to serve.

Now and always, we remain proud of her achievements.

If you remember this great woman, or you have memories about her, please comment below.