From a third class to a 2:1 in two years

FROM A THIRD CLASS TO A 2:1 IN TWO YEARS

Meet ADAMS DANIEL, a young man who raised his CGPA from a third class to a second class upper division (2:1) in a space of two years.

Although his place of birth is Maiduguri Bornu state, he lived, schooled and grew up in Edo State. I got to know about him after I ventured into his social media account and what I saw prompted me into writing this article. 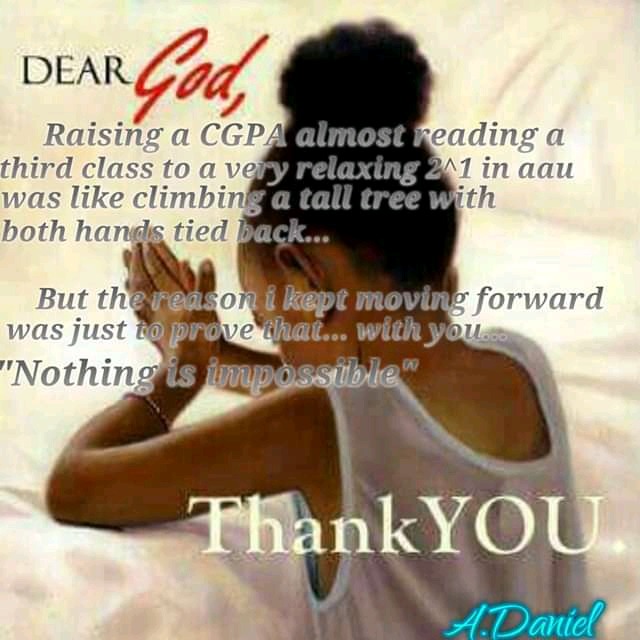 These were his exact words;

DEAR GOD, raising a CGPA almost reading a third class to a very relaxing 2:1 in AAU was like climbing a tall tree with both hands tied back... but the reason I kept moving forward was just to prove that… with you “NOTHING IS IMPOSSIBLE”

Knowing he is a Christian , a member of the Redeemed Christian Church of God (RCCG), he loved helping others academically as he taught and took tutorials sometimes for money but most times for free all through his stay in the university even as a 100level student. He is a student of AMBROSE ALLI UNIVERSITY EKPOMA EDO STATE, formally known as BENDEL STATE UNIVERSITY; where he studied industrial chemistry; knowing it was one of the most difficult courses to comprehend. His respective GPAs were; 2.4, 3.78, 4.60 and 4.77.

Here is one of the materials he published and sold while in school; 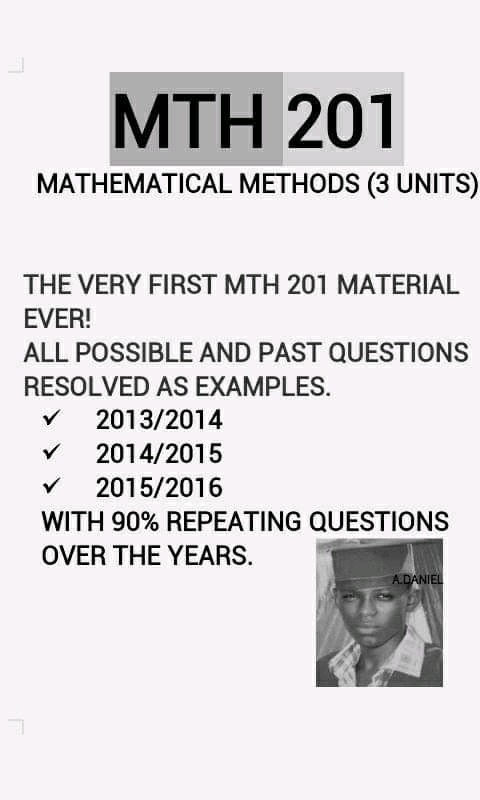 Surprised? Of course he taught mathematics as well even to 400level students in other departments.

From my research, I learnt he made a very poor performance in his first academic year, which was due to a health complication he suffered. His very first result saw was an “F”, as he suffered two carry overs with a total of 6units, and about “7Ds” out of about 18 courses he offered that year.

The following year, he had to roll over a 3unit course into his third year as the total unit allocated for the second year could not accommodate it.

Base on my assessment and a post he made, I could tell he never gave up the following year as he maintained his faith in God and kept reading for at least four hours every night for six days in a week.

Also, based on the increasing trend on his CGPA, I could tell he was meant to be a first class student.

He is currently working as a laboratory scientist, but still claims he hasn’t even started venturing into his carrier yet. From every indication, I believe he would have made attempt for masters and phd.

Well, I decided to write this piece about him as I was challenged, regarding how courageous he was despite a very poor beginning. I also see him as a source of encouragement to other students world-wide, who are already discouraged and may have forfeited their admission due to poor performances.

I know that there are many out there who were just like him.

With the right motivation, determination as well as faith in God, I believe anyone and everyone can do anything. Don’t forget that with God all things are possible.

Content created and supplied by: Danihab360 (via Opera News )