13-yr-old becomes Famous after Graduating from College with 4 Degrees.

It is safe to assume that most of us have been through that phase of being excited to turn 13 knowing that it is the gateway to teenage years or adolescence. Generally, the adolescence stage of the formative years is very crucial where teens experience and learn how to adjust socially, struggle in school, handle peer pressure, and so much more. Although he is no different from other kids his age, Jack Rico is still a great exemption in his own right. The 13-year-old graduated from California’s Fullerton College with four associate’s degrees.

Yes, you read that right.

Jack holds the record of being the youngest student ever to graduate from Fullerton College. His friends and family threw him a special commencement ceremony to celebrate this one-of-a-kind victory. 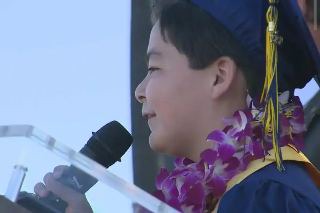 Graduating from college with four degrees at such a young age is no easy feat. It may even sound ridiculous for some as it is very hard to believe that that’s even possible. It is absolutely unimaginable but nothing is out of reach for Jack whose success is achieved through the foundation of hard work and dedication. Jack explains,

“You never just know everything. You have to study day and night.”These are words of wisdom coming from a 13-year-old.Sporting a blue graduation cap with a yellow tassel and matching it with a Hawaiian lei, Jack proudly poses for a photo with a sign behind him which says Youngest Graduate Ever.

Ladies and gentlemen, let’s all welcome the youngest graduate for the Class of 2020. His friends and family arranged a special and socially distant graduation commencement for him. Some guests are wearing masks while others remain in their cars parked near the makeshift commencement stage.

They must be so proud of him.Jack’s grandparents were also present. His Grammy’s sign reads, “Congratulations to our grandson Jack. Grammy and Papa are so proud of you.” “We checked in admissions and records. It has never been done before.” And it is finally official. Draped in red garb and protected with facemask, he presented Jack with a certificate. They took pictures together while looking prestigious in their graduation gowns. Other than celebrating traditionally in the worst global pandemic in 100 years, the event was held normally while still observing social distancing for safety measures.And of course, without forgetting the ceremonial cap toss. Jack captured this once-in-a-lifetime moment together with his family and friends smiling from ear to ear. They must be so proud of him.

So, what’s next for Jack? He said he wants to explore his options and develop a passion. He shared that he is currently into screenwriting and jokingly stated in an interview, “Wanna go out to dinner, Steven Spielberg? Alright. You wanna pick up Michael Bay on the way? You know, like that’d be pretty cool.”

Given his intelligence and perseverance, nothing sounds impossible for him. It is certainly not a competition but it is very rare to see someone reach what Jack has at his age. After all, Jack is not your ordinary kid. Inside Edition adds information about his life, “Jack Rico, 13, is the youngest student ever to graduate from Fullerton College with four associate degrees, according to the school. The teenager from La Mirada, California accomplished such a feat in two years. Rico’s mom started homeschooling him in the third grade because he needed more of a challenge. To celebrate his graduation, friends and family threw him a party in the front yard. Next fall, Rico will continue his education at the University of Nevada Las Vegas.”

Hold on, does that mean we are expecting to see a 14-year-old kid attending the University of Nevada Las Vegas for his fifth degree next year? This boy never ceases to amaze people.

No matter how uncertain this world may seem, one thing’s for sure – a very bright future is in store for this exceptional kid. Keep it up, Jack. The world is your oyster.

EPL: 3 Teams That May Win in Saturday's Games