UTME - Candidates stranded in Lagos and Abuja due to a system failure.

By Sunnystyles (self media writer) | 11 months ago

The Unified Tertiary Matriculation Examination (UTME) left hundreds of applicants stuck and frustrated in some examination centers in Lagos and Abuja on Saturday.

The 2021 Unified Tertiary Matriculation Examination (UTME), which is being organized by the Joint Admissions and Matriculations Board, commenced on Saturday and is slated to run in three sessions until July 3, 2021 at the various JAMB-approved Computer Based Test centers around the country.

While the exam went successfully at certain centers, applicants at some Lagos and Abuja centers were left stuck as a result of a system glitch.

For example, one of our correspondents learned from a source at the Sweet Valley Educational Centre, which is located on Governor's Road in Ikotun, Lagos, that only 30 students were able to sit for the exam on Saturday out of over 800 who had enrolled at the center.

At the center, three groups of applicants were scheduled to take the exam between 7 a.m. and 2 a.m. on three different days, but as of 3 p.m., just 30 candidates had taken the exam out of an estimated 800 pupils.

Many parents who were present at the center with their children expressed their dissatisfaction by requesting that JAMB close the center. 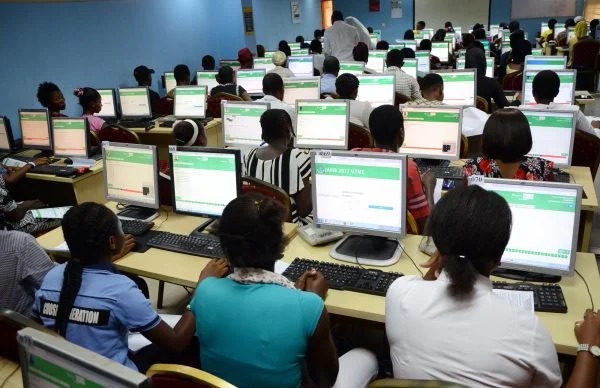 Mr. Marcus Akingboyegbe, a parent of one of the students, stated, "My son, who is one of the candidates, has been here since before 7 a.m., when the first batch of candidates was scheduled to sit the exam." It's 3 p.m., and I still don't know what happened to my son. What is the destiny of the other candidates in the race? A large number of parents are also in attendance with their children.

"My son phoned me because he couldn't figure out why he hadn't been able to sit for the exam; that's why I went to the testing center. They stated that the server was down and that they had been unable to resolve the issue. "

According to Mr. Tunde Gbadebo, a second parent, his daughter has been left traumatized as a result of the occurrence.

"She had been at the testing center since 7 a.m., and she and a large number of other candidates were unable to sit for the exam until 3 p.m. They informed me that the system had been shut off. They would like to reschedule the exam date. "My daughter is dissatisfied," he explained.

Mrs. Agnes Iluyomade, whose child was also scheduled to take the UTME at the center, also stated that JAMB should close the center for a variety of reasons.

"The center is in a state of disorder. We've spent the entire morning sitting here doing nothing.The first batch of students is still on campus.Many of the contestants are crying, as they are heartbroken.

"Even the environment is not conducive to success. This center should be closed down because I have no idea who accredited it. It's in close proximity to a dunghill. "There has been a foul odor rising from the dunghill since the morning," she stated emphatically.

What do you think about these ?