The Top 10 Most Spoken Languages In Nigeria

Figures for the number of spoken Nigerian languages range from 250 to over 500 with Ethnologue placing the exact number for Nigeria at 527. This anomaly arises where scholars are in disagreement over which language constitutes ‘language’ and which constitutes ‘dialect’. Ajawa, Auyokawa, Basa-Gumna, Gamo-Ningi, Holma, Kpati, Kubi, Mawa and Teshenawa are now extinct Nigerian languages.

These are the top ten most spoken Nigerian languages: 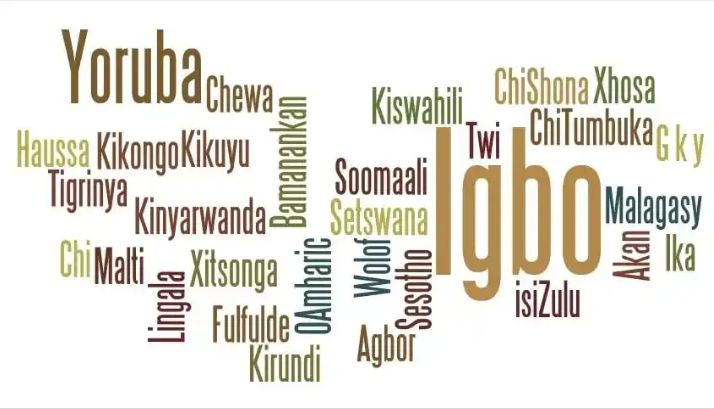 Hausa (or Abakwariga, Habe, Haoussa, Hausawa, Kado, Mgbakpa) is often associated with Islamic culture in Nigeria and West Africa. As one of the most spoken Nigerian languages, 18.5 million native speakers are found in Sokoto, Kaduna, Katsina, Kano, Bauchi, Jigawa, Zamfara, Kebbi, and Gombe states. Hausa is also spoken by 25 million people in West Africa including Chad, Cote d’Ivoire, Ghana, Niger, Senegal, Sudan and Togo where large Hausa communities exist. Hausa is also the second language of 15 million more people in Nigeria making it the most spoken language in sub-Saharan Africa and has prompted international radio stations like the BBC, China Radio International and Voice of Russia to broadcast in Hausa.

Igbo (Asusu Igbo) is the principle language spoken by about 24 million people (primarily of Igbo descent) in Abia, Anambra, Ebonyi, Enugu and Imo States. Igbo is also spoken in some parts of Akwa Ibom (Ika LGA), Delta (Oshimili, Aniocha, and Ndokwa LGAs) and Rivers States (Ikwerre, Bonny, and Ahoada LGAs). Significant Igbo speakers are also found in Cameroun while in Equatorial Guinea, Igbo is a recognized minority language. Numerous Igbo dialects exist (some of which are not mutually intelligible) including Bonny-Opobo, Ngwa and Olu.

Interestingly, in 2009 the US Army scouted for recruits who could speak one of 35 languages including Igbo.

Yoruba (or Yoruba, Yooba) is the native tongue of the Yoruba people and is spoken by approximately 18.9 million people concentrated in Oyo, Ogun, Ondo, Osun, Kwara, and Lagos states and parts of Kogi State. Outside Nigeria, Yoruba is spoken in Benin, Togo and by Nigerian immigrants in the UK and the USA raising the total number of native Yoruba speakers to over 19 million and making it one of the top most spoken Nigerian languages worldwide enm3333. In addition, about 2 million people speak Yoruba as a second language. Yoruba has over fifteen dialects including Awori, Ijesha, Ilaje and Ila.

Fulfulde (or Fulani, Fula) is of Senegambian origin but now spoken by cattle pastoralists across the Sahel and largely in Northern Nigeria by the Fulani diaspora. In Nigeria, 1.7 million Fulfude speakers are found in Kano, Katsina, Zaria, Jos plateau, Bororo, Maiduguri and Sokoto. In total, there are 19 African countries stretched across West, East and Central Africa that are home to about 25 million Fulfude speakers. In Senegal and Guinea, the language is called Pulaar and Pular respectively. A number of Fulfude dialects exist including Bororo, Kano-Katsina, Adamawa Fulfude and Benin-Togo.

As one of the most spoken Nigerian languages, Kanuri (or Beriberi, Bornu, Kanouri, Kanoury, Yerwa Kanuri), is the principle representative tongue of the Nilo-Saharan linguistic group. Three million native speakers are mainly located in Borno State (Kukawa, Kaga, Konduga, Maiduguri, Monguno, Ngala, Bama, and Gwoza LGAs), Yobe State (Nguru, Geidam, Damaturu, Fika, Fune, and Gujba LGAs) and Jigawa State (Hadejia LGA). In addition, about 500,000 people use Kanuri as a second language in Nigeria. Although many dialects exist including Kaga, Fadawa and Yerwa linguists agree that the Maiduguri dialect is universally understood.

The Ijaw people speak 9 closely related Niger-Congo languages which are divided into Eastern Ijaw and Western Ijaw with Izon being the most prominent member the latter. Ijaw (or Izo, Uzo, Ijo, Central-Western Ijo) is spoken by almost 2 million people in Bayelsa (Yenogoa, Souther Ijaw, Kolokuma-Opokuma, Ekeremor and Sagbama LGAs), Delta State (Burutu, Warri and Ughelli LGAs), Ondo State (Ilaje Ese-Odo LGAs) and Ekiti State (Ikole LGA). A number of dialects exist including Arogbo, Egbema, Ikibiri and West Tarairi with about 30 of them being inherently intelligible.

Nigerian Pidgin English (or Pidgin, Broken English, Broken) is a blend of English and ethnic Nigerian languages spoken operating as a kind of lingua franca across Nigeria.It is estimated that Pidgin is the native language of approximately 3 to 5 million people mainly concentrated in the Niger Delta region and is a second language for at least another 75 million Nigerian people.

Tiv is a branch of the Niger-Congo linguistic family. As one of the most spoken Nigerian languages, Tiv is spoken by over 2 million people in Nigeria concentrated mainly in Benue State (Makurdi, Gwer, Gboko Kwande, Vandeikya and Katsina Ala LGAs). It is also widely spoken in Plateau State (Lafia LGA) and Taraba State (Bali, Takum, and Wukari LGAs) while there are also a significant number of Tiv speakers found in neighbouring Cameroon.

Ibibio (closely related to the Efik language) has some 1.5 million native speakers with about 4.5 million level 2 users concentrated in Akwa Ibom State in Itu, Uyo, Etinan, Ikot Abasi, Ikono, Ekpe-Atai, Uruan, Onna, Nsit-Ubium, and Mkpat Enin LGAs. Although several dialects exist, the more common ones include Central Ibibio, Enyong, Itak and Nsit. Ibibio is taught in primary and secondary schools (and even online at

Edo (or Ado, Benin, Bini, Oviedo and Ovioba) is primarily spoken by at least 1 million people in Edo State. Interestingly, in November 2013 a scholar quoted the Esogban of Benin Kingdom as raising alarm over the ‘likely extinction of the Bini language’. This is possibly due to the lack of a common language in Edo State, gradual decline of speaking Edo in homes and the more pronounced use of English and Pidgin English as lingua franca.