How Opera moved me from being unable to afford payment of JAMB form to an undergraduate of FUNAAB.

I will always return all glory and adoration to God Almighty because he has done tremendous things in my life. Here is my touching story and I wish all teenagers and youths could learn from my story. When I was preparing for my WAEC and NECO, it was difficult for me to make payment due to financial problems affecting me. In 2021, I am giving thanks to God because I am now an undergraduate of Federal University of Agriculture, Abeokuta (FUNAAB).

Before I graduated from Secondary School in 2019, I couldn't afford payment of school fees due to financial problems that arose when I was in SSS2. The WAEC and NECO registration was getting closer to an end and I was unable to afford #50,000 for the registrations. My parents were unable to gather the money and I wished to partake in the registration that year inorder to prevent waiting for another extra year in secondary school. After I worked for a month in the factory, I was able to register for only WAEC due to the fact that I could only afford to pay #25,000 out of #50,000. I was heartbroken that I couldn't afford the whole money despite all my struggles. I successfully wrote my WAEC in April and when the results were released, I didn't have an "A" grade but I bagged 5 B's and 4 C's.

After seeing my impressive results, I relaxed for more than three months because I was overwhelmed and excited that my efforts during the WAEC registration wasn't in vain.

In December 2019, I wrote an application letter as a cleaner to a private based hotel in Ibadan. I was eventually employed but within three weeks, I was sacked from the job due to my lateness and bad attitude to work.

After I was sacked in the job, i was always indoor and I started hearing some rumours that JAMB registration has begun and it would close in the next one month.

In January 2020, I searched on Google about the guidelines to obtain Jamb form and it redirected me to a content written by someone. I made my researches and I discovered that people like me are the ones writing the article on the Opera News Hub platform.

As soon as I saw the guidelines on how they pay creators, I registered to become a writer on Opera and I inputted my personal details including my mobile number and my Opay number.

As a newbie, I created my first article on the 11th of January, 2021 and it amassed 2.5k clicks including my engagement bonuses. Before the end of January, I wrote 29 articles and I amassed around 127,000 clicks.

In the first week of January, I was already loosing hope that I won't be able to afford #7,000 for my Jamb registration until I got the news that it has been extended for further two weeks.

As soon as Opera paid my January earnings, I instantly registered for the examination though my center was moved to Ogun State because Oyo State centers have been occupied.

I was unable to concentrate on writing news on Opera because I was desperately preparing for the examination. I wrote the exam in Ogun State and after the results were released, i had 242 as my Jamb Score.

After I had an impressive Jamb result, I continued writing on opera and I made more than #18,000 in two months.

In July, I obtained the undergraduate form of Federal University of Agriculture Abeokuta for a fee around #6500. I wrote the examination in September and I scored 56%. I chose to study Microbiology intially but I was transferred to Animal Production and Health due to the my low point compared to other aspirants.

Here is my Admission letter from Jamb; Here are some of my FUNAAB files which include my WAEC and Jamb result; 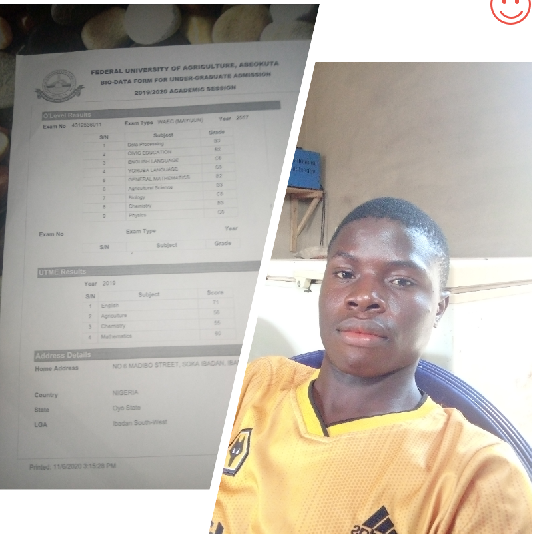 "The tougher the exam, the bigger the promotion" Pastor Adeboye Says As He Bid Farewell to Late Son