Nobel prize was a coincidence 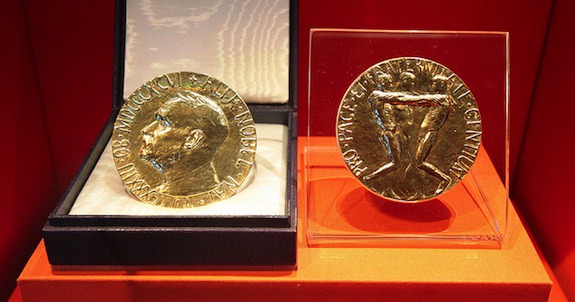 Alfred Nobel, the inventor of dynamite,was sure his creation would help bring about the end of war. "When two armies of equal strength can annihilate each other in an instant, he once wrote, " then all civilized nation's will retreat and disband their troops.

Things didn't quite go according to plan.what has worked out however,is the annual set of awards, established in 1901, that bear his name.they remain the most prestigious intellectual awards in the world. the Norwegian lifelong bachelor Nobel lived a solitary life and spent most of his time tinkering with inventions, amassing 355 patents by the time he died in 1896. Following Nobel's death,his executors discovered that he had secretly created five annual prizes for chemistry, physics, literature, medicine and peace_ in his will to honor "the greatest benefit on mankind".it came as quite a surprise. "It took five years to get the prizes started.

Each award is decided by separate institution which form assemblies to select the actual prize recipients. Some prizes (medicine) require Nobel assembly members to remain active in their field, while others (literature) appoint members for life. The peace prize is actually decided by five members of the Norwegian parliament. Nobel prize winners must be living; there are no posthumous awards. Each year, the Nobel committees distribute nomination forms to an undisclosed numbers of recipients_past winners, prominent institutions, respected members of the field- who are allowed to choose as many nominees as they want. Self-employed nomination is not permitted. The winner is decided by a simple majority vote.

Each recipient (known as a "laureate") receive a gold medal,a diploma,and a sum of money that has been decided by Nobel committee.

Content created and supplied by: Igweemeka689 (via Opera News )