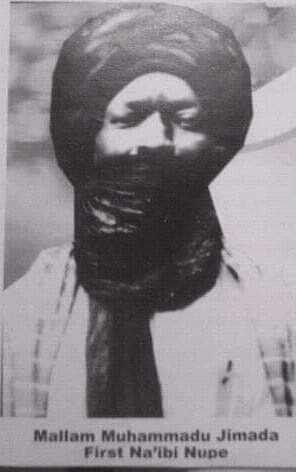 Mallam Muhammadu Jimada was born in Bida during the reign of Etsu Umaru Majigi to the family of Mallam Muhammadu Shafii Alfa Chado who was then the Chief Judge of Bida Emirate and at the same time the Chief Imam of Bida.

He was one of the first set of people from KinNupe to have access to western education in the whole of the Northern region. After his western and Islamic education, he became a great teacher, an administrator of high repute, a seasoned civil servant in the defunct Northern Region Education Sector and a distinguished personality. He held several positions including Headmaster, Councillor, Chief Treasurer and was the first Scribe of the then Bida Native Authority and the old Niger Province, thus having the opportunity to meet his father who was the Chief Judge of Bida Emirate in a meeting.

Late Muhammadu Jimada was among the first eight to have acquired western education in KinNupe during the reign of Etsu Muhammadu Makun, making him one of the first to be enrolled at EDOGIFU Missionary School in 1904. It will be recalled that Edogifu Missionary School was the first of its kind ever established throughout the entire KinNupe.

Naibin Nupe as he was later known made the list of the eight that were subsequently sent to Kano by Etsu Muhammadu Makun in November 1910 to be trained as teachers for the educational development of KinNupe. These students graduated in flying colours, and thus became the pioneer teachers in 1911.

In November 1912, the first Native Authority Elementary School in Northern Nigeria was established by the British in conjunction with the approval of the Etsu Nupe. The school was located at BANMISU GBARA. The school was changed to a Provincial Secondary School in 1912. It was the Provincial School that later metamorphosed into the present-day Government College Bida.

The pioneer staff of the school include among others the following:

Naibin Nupe was among the early teachers in Northern Nigeria to be awarded Certificate by the British Council for Education, with certificate as Professional Teachers and Administrators, presented by Sir Hann Vischer, Director of Education, Northern Nigeria 1910-1919 at Kano headquarters.

Naibin Nupe in 1921 was appointed the first Visiting Teacher to Adamawa, Bauchi and Jos Provincial Schools before his deployment to Bida Provincial Secondary School as the third Headmaster in 1926. Naibin Nupe's name was one among the three houses created in 1930( Angwar Nagwamatse, Angwar Sabon Gida, Angwar Jimada Naibi) as the first student hostels.

The history of western education will be incomplete without acknowledging Mallam Muhammadu Jimada. He was one of the early settlers in a place near Minna called Kongila that is still densely inhabited till date.

Below were among the few prominent students of Mallam Muhammadu Jimada at Bida Middle School, Adamawa, Bauchi, Yola, Jos and Katsina:

The late Muhammadu Jimada was turbaned as the first Naibin Nupe by Etsu Saidu Dan Mallam Mahmudu in 1927 in recognition of his remarkable contributions to the propagation of Islamic education in KinNupe.

He died in 1949 and was buried in Yola after living an impactful life that was dedicated to the service of God and humanity.