Prof Enefiok Effiong Essien is bowing out today as Vice-Chancellor Of the University of Uyo (UNIUYO), having successfully completed his five-year tenure.

To many, his emergence did not come as a surprise, having been the Dean, Faculty of Law for 14 good years and Chairman, Committee of Deans, among other leadership positions, were all he needed to prepare himself for the top job.

So, as would be expected, his inauguration became a reality on 1st December 2015, when the soft-spoken legal luminary became the first UNIUYO Vice-Chancellor to be sworn-in at the Main Campus of the institution on Nwaniba Road, Uyo.

In his maiden speech, Enefiok Essien, a Professor of Commercial Law, had appealed to all to see his emergence as the handiwork of God and promised to change the status of the institution.

Today, true to that commitment, the administration of Prof Essien has brought remarkable development to the institution.

Prior to his assumption of office in 2015, the University of Uyo was ranked 28th among Nigerian universities and ten thousand, five hundred and eighteenth in the world, on the Webmetric ranking.

Similarly, when Prof Enefiok Essien took over the reins of administration, there was a prolonged strike by members of the university non-teaching staff unions due to disagreements with the then University management. But shortly after he took office, Prof Essien was able to resolve their grievances with the strike called off.

Peace did not only return to the University, it was pervasive to the extent that throughout his tenure the University of Uyo’s academic calendar was not interrupted.

In the five-year tenure of Prof Essien, a total of 240 professorial promotions have been made, 131 other academic staff were elevated, 364 Senior Administrative and Technical Staff, and 329 junior staff got promoted too.

That the University of Uyo now has smart e-Senate, is also to the credit of Prof Essien administration just as the establishment of UNIUYO International Secondary School, located at the Town Campus Annexe of the University, is a legacy to his stewardship.

In the area of promoting gender equality, Prof Essien has been very fair and equitable. He ensured gender balance in the choice of Deputy Vice Chancellors as he consistently chose and retained both male and female professors as his deputies throughout his tenure. He also ensured that convocation in the University of Uyo is a yearly affair, apart from the 2020 edition, which couldn’t hold due to the ASUU strike and COVID-19 pandemic.

It is important to note that Prof Essien’s leadership also ensured that all degrees and certificates are signed and ready for collection immediately after convocation.

His administration has sustained the University Covenant Service service marked on 11th April every year, in line with the University’s Core Value anchored on “Faith in God”.

His relationship with students and students union was most robust. He maintained an open-door policy with the Students Union officials and remained accessible to students generally. It is also to the credit of the outgoing Vice-Chancellor that the first-ever e-voting method was adopted for the election of Students Union Government executive to check electoral fraud.

In the area of host community relations, Enefiok Essien was not found wanting. The University, in collaboration with the National Directorate of Employment, NDE, organized Skills Acquisition for Youth of the host communities from July 2019 to June 2020.

On promoting women mobilization, Prof Essien is leaving indelible footprints on the sands of time. Before now, the University of Uyo Women Association, UWA, was unknown.

But today, with the support of Professor Enefiok Essien, the UNIUYO Women Association under the dynamic and selfless leadership of Mrs Rosalyn Essien, the wife of the outgoing Vice-Chancellor, has contributed in no small measure to galvanize women and female students for the development of the university.

Mrs Rosalyn Essien is a good example of the saying that beside any successful man, there’s a strong woman. Through her leadership, the University Women Association has been able to initiate programmes which have created positive impact in the University of Uyo.

Among such projects are the regular publication of the Association’s news bulletin, periodic jogging and aerobic exercise to improve physical and mental alertness of staff.

Others were opening of UNIUYO Women Association canteen at the Town Campus of the University, creche at the Annexe, staging of solemn assemblies, hosting of end of year children’s party, retirees get together, celebration of International Women’s Day and mounting of outreach to schools and protest against rape.

The Senior Advocate of Nigeria will be remembered as a man who did his best for the advancement of that great citadel of learning. 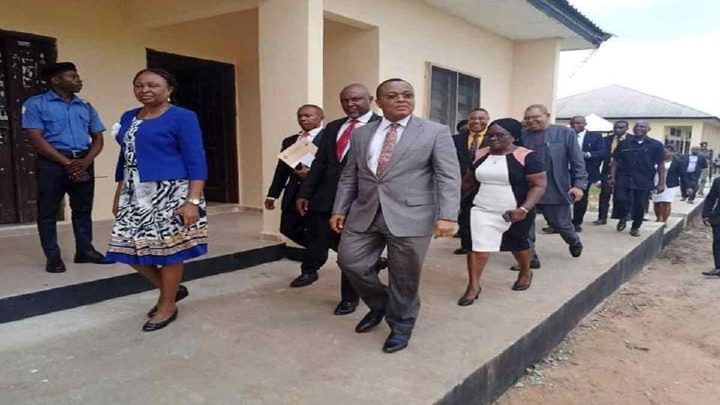 As his tenure as Vice-Chancellor and that of his wife, Rosalyn as President of UNIUYO Women Association end today, one expects that more opportunities for service are opening for Professor Enefiok Effiong Essien and wife.

Bravo, the Learned Silk and Pride of the prestigious Faculty of Law.