Ted at 16, was admitted to Harvard. At 25, he became the youngest assistant professor of mathematics at University of California. Ted resigned from his professorship in 1969 to live a primitive life. In 1978 he started targeting university professors and airplanes, delivering self-made bombs. 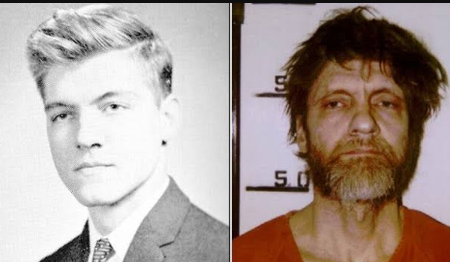 In late 1967, the 25-year-old became the youngest assistant professor of mathematics where he taught undergraduate courses in geometry and calculus. He finds it uncomfortable to teach straight from the textbook and refused to answer questions. He later on resigned and went to live his primitive life. Living his primitive life, he moved to a remote cabin without electricity or running water. Here he began his bombing campaign in 1978.

In 1981, he packaged a bomb and sent it to University of Utah for Prof. Patrick where his secretary opened the bomb and received injuries to the face and arms.

At University of California in 1982, he sent a bomb which caused serious injuries to engineering professor Diogenes and for nearly 3 years a graduate student and captain in the United States Air Force, lost four fingers and vision in one eye due to Teds bomb. In November 1985, professor James V. McConnell and research assistant Nicklaus Suino were both severely injured after Suino opened a mail bomb addressed to McConnell. In 1993, after a six-year break, Kaczynski mailed a bomb to the home of Charles Epstein from the University of California, San Francisco. Epstein lost several fingers upon opening the package.

In 1995, He promised to desist from bombing if only The Times and Washington Post would print his 35,000-word essay Industrial Society and Its Future. He stated he would "desist from terrorism" if this demand was met. He was later captured in 1996 after killing 23 people.

Truck that uses gallon as petrol tank. The risk many Nigerians go through

5 Things You Need To Know About Obafemi Awolowo University

April 16th, Say These Prayers This Night Before You Sleep

Spice Up Your Wardrobe With These Elegant And Stylish Boubou Styles

Why Do Many People Suffer Before Their Breakthrough? - Pastor Chris Oyakhilome Answers

It Has 775 Rooms, Checkout Photos Of The Famous Buckingham Palace Where Queen Elizabeth Resides.