Meet the Igbo man regarded as the father of the internet (from grass to grace story).

Nigerians might be labelled with bad names abroad, we still have the one's that make us proud. Philip Emeagwali, one who observed how bees work together in their hive and applied the same principle to improve the speed of computation. His invention has led to the development of modern-day internet.

Born in Akure (August, 23,1954), a village in Nigeria, Philip Emeagwali was the eldest of his family(a family of nine children). He was well known during his childhood for his skills in mathematics. By the time he reached secondary school, he has been nicknamed "calculus". His father spent a substantial amount of money on his education.

No sooner his high school education began than the Nigerian civil war broke out.

Philip's family were from the east, so they fled to the eastern part of the country.

The mathematician was recruited into the Biafran army. His family lived in the refugees camp till 1970 when the war ended.

Life was not a bed of roses for Philip, after the war, he struggled to go back to school. History recounts how he trekked for two hours to and fro to the school he attended at Onisha.

Unfortunately, he had to drop out due to financial problems.

He never gave up, he continues studying. He passed a high school equivalency exam administered by the U.S. He was given a scholarship to study abroad.

Philip Emeagwali travelled to the U.S in 1974 to attend Oregon State University. Upon arrival, in the course of one week, he used a telephone, visited a library, and saw a computer for the first time. He studied mathematics at the University, and later went to another university( George Washington University) to obtain his master's degree in ocean and marine engineering.

While attending the University of Michigan on a doctoral fellowship in the 1980s, Emeagwali began work on a project to use computers to help identify untapped underground oil reservoirs. He grew up in Nigeria, an oil-rich country, and he was someone who both understood computers and how to drill for oil. 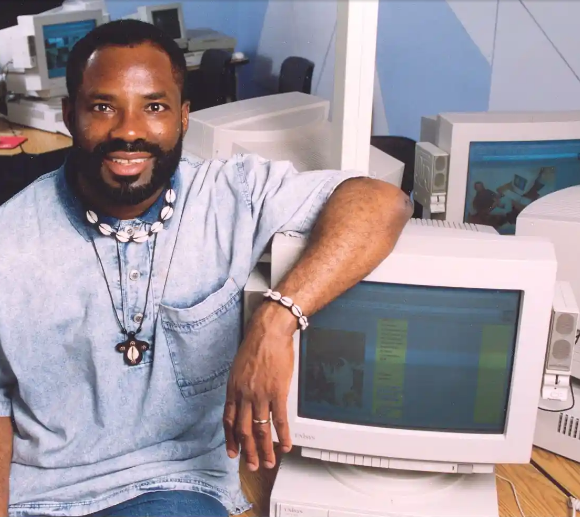 Then the need for speed came in, instead of using supercomputers, he thought of linking up thousands of microprocessor to do his calculations. When he was asked where he got his inspiration from, he said that he observed the way bees work together in their hive.

He demonstrated a practical and economical way to allow computers to communicate with each other and collaborate all around the world.

This lead to the development of THE INTERNET. You could agree with me that he brought glory to the name "Nigeria".