Another Protest Begins In Abuja

Scores of final-year students of the University of Abuja on Friday embarked on a peaceful protest against the refusal by the school management to release their statements of results. 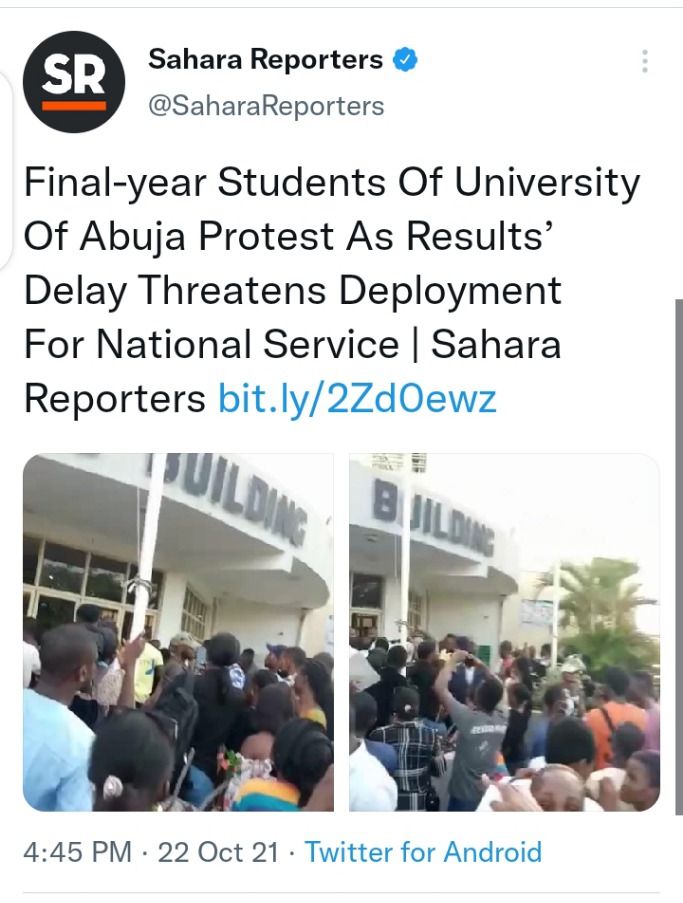 Students from various departments gathered in front of the school's Senate building and demanded that their results be released.

They accused the school’s Vice-Chancellor, Prof. Abdul Rasheed Na'Allah of toying with their careers and brazenly displaying impunity.

Saharareporters gathered that the school management had cleared some students to participate in the NYSC scheme.

The students were expected to have reported to their various orientation camps on Wednesday, October 20, which was the deadline for the exercise but they could not do so as their statements of results were pending.

The Academic Planning Unit of the school was said to have claimed that the students did not submit the receipts of N4,500 acceptance fee each of them was expected to pay.

Some of the students who spoke to SaharaReporters said the school management was being untruthful, adding that it was not possible for any student to be given admission without them paying an acceptance fee.

They stated that they have been going to the academy planning unit since last week but have had no success.

They expressed doubts that they would be able to complete their NYSC orientation by the deadline of Friday, October 22.

At the time of this report, the school’s security agents were having a hard time controlling angry students who had vowed not to leave until their demand was met. 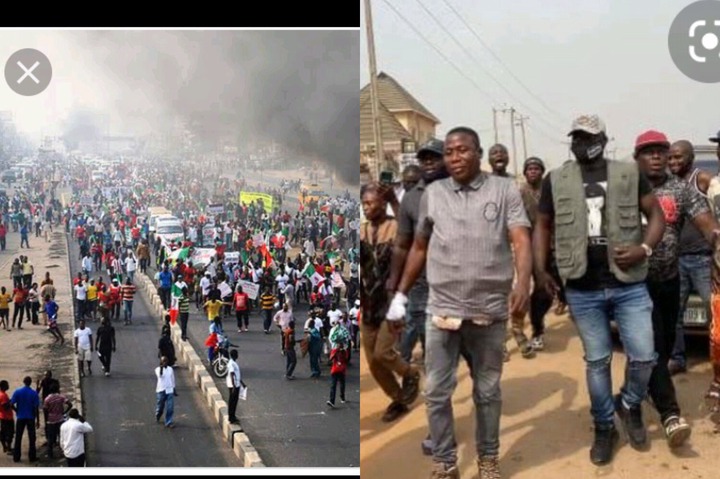 The Federal Government has revealed that Yoruba Nation agitator, Chief Sunday Adeyemo, aka Sunday Igboho, was being sponsored by a Member of the National Assembly. 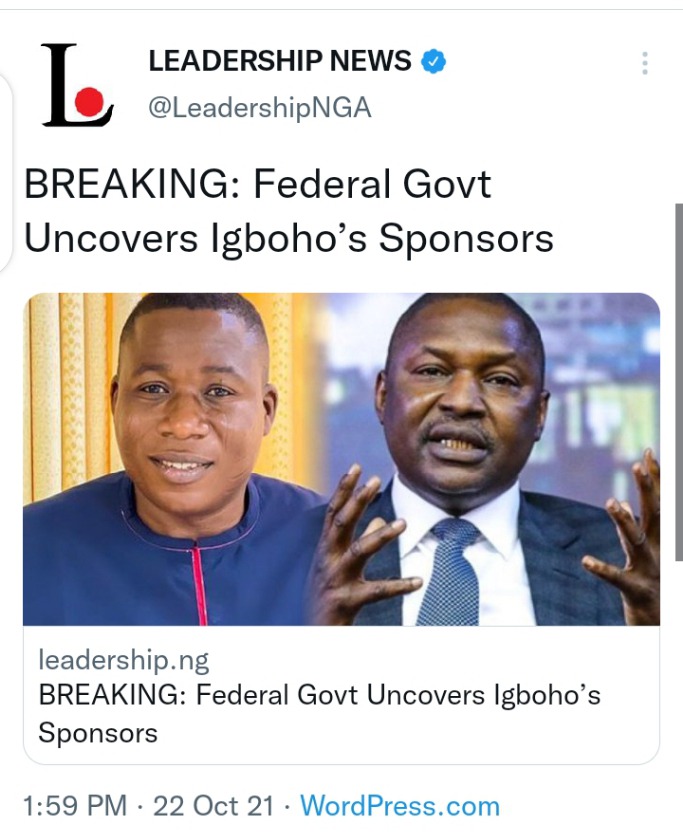 Abubakar Malami (SAN), Attorney-General of the Federation and Minister of Justice, made the announcement at a press conference in Abuja on Friday.

LEADERSHIP Recall that during his 61st Independence anniversary speech, President Muhammadu Buhari stated that a member of the National Assembly was sponsoring agitators.

But without mentioning any name, Malami said the major financier of the Yoruba nation agitator is a lawmaker.

According to him, a committee set up by the Federal Government unraveled how Igboho got monies from 43 bank accounts, across nine banks.

No fewer than 19 suspects have been arrested by the Police in Bauchi for various criminal offences ranging from kidnapping, armed robbery, homicide among others across the state. 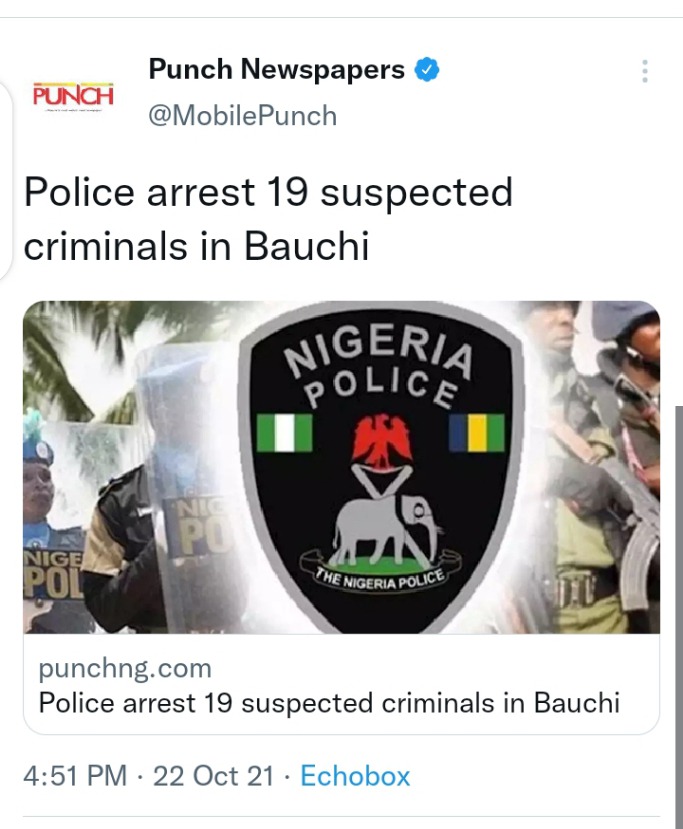 The Bauchi State Police Command disclosed this in a media statement signed by its Public Relations Officer, Ahmed Wakil, and made available to journalists on Friday.

“They conspired among themselves, armed with dangerous weapons, stormed the house of one Jibrin Aliyu and shot him dead. They also stormed into the house of one Ibrahim Dai and kidnapped his son, one Idi Jibrin, to an unknown destination where they demanded a sum of one million five hundred thousand as ransom,” he said.

The Supreme Court of Nigeria has dropped a Senior Advocate of Nigeria, SAN, designate, Nworka Chidi Benjamin 24 hours after his elevation to the rank was discovered to have been done in error. 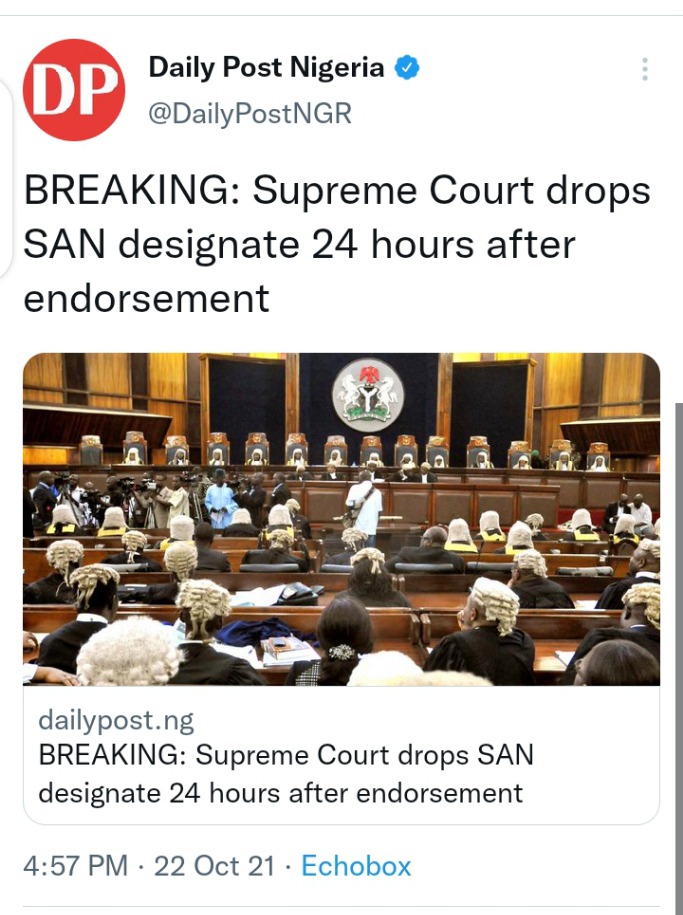 The Supreme Court said on Friday, through The Legal Practitioners' Privileges Committee (LPPC), that the list of Senior Advocates of Nigeria (SANs) appointees released on Thursday, October 21 contained an error.

In a statement, the LPPC Secretary and acting Chief Registrar of the Supreme Court, Hajia Hajjo Sarki Bello, stated that a name on the list had not been properly identified.

Bello said while the actual appointee is “Osaka, Benjamin Nwora esq”, he was wrongly identified in the list of Thursday as “Nworka Chidi Benjamin esq,” and listed as number 43 on the list.