After Spending 4Years; He Realized His Admission Was FAKE, Reapplied And Graduated As Overall Best

After Spending 4Years; He Realized His Admission Was Fake, Reapply And Graduated As Overall Best

The Nigerian Education sector is that which has an inherent and systemic corruption just like any other sectors of the country. In fact, one might not be totally out of place to conclude that the sector is one of the most corrupt because it encompasses both financial and non-financial aspect of corruption. Every student who has passed through any of the tertiary institution would always have something to share to friends, families and his or her offsprings. This is because the institution has been designed in such a way that whoever is admitted would have some stories to tell either good or bad. One of such is the story of a fresh graduate that looks strange but very true.

A young man whose name is given as Ramsey Aka was said to have been admitted into Abia State University(ABSU) to read Mass Communications which has a duration of 4 years. After going through the rigorous lectures, assignments and examinations as expected of any typical Nigerian university, he was formally informed on the day of his convocation that he had been offered a fake admission from his first year.

Instead of taking a severe action against the school, he accepted what has happened in good faith but the shocking thing is, he re-applied into the university to study the same course and after completing the 4-year course, he graduated in the department as an overall best student in the department and currently a corp member. 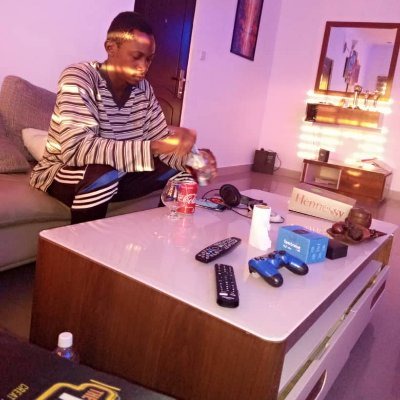 This story has generated a huge spark on the social as many began to ask plethora of questions, ranging from the authenticity of the story to why he couldn't take a legal action against the school. Coincidentally, Aka whose official twitter handle is @MgbeahuruRanso1was online to respond to those questions and his doubters. He also gave a more detailed information to the story.

Ordinarily, the only bizarre thing in the story is how one could summon the courage of going through a system that has failed him again without considering alternatives. In fact, some would have committed suicide given the psychological trauma that come with such news.

Here are some of the reactions:

@omobolajiokedij doubts:Who believes Facebook stories in 2020?🙄🙄So, he was writing tests and exams and seeing results for 4 years..He had a matric number and was paying school fees every year. Y’all should think about it for a moment.Rubbish story

@Gurd2B hail his doggedness: "I admire the resilience. Bt in my opinion it is absolutely not acceptable. And praising it is like encouraging a failed system. If he was going to start again the second time he shouldn't have had to pay . Cause he already paid them 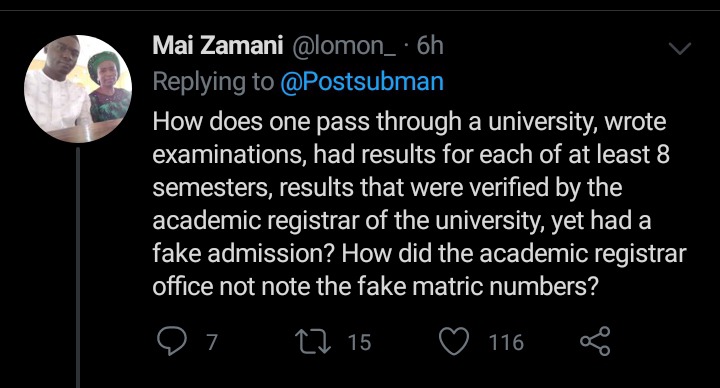 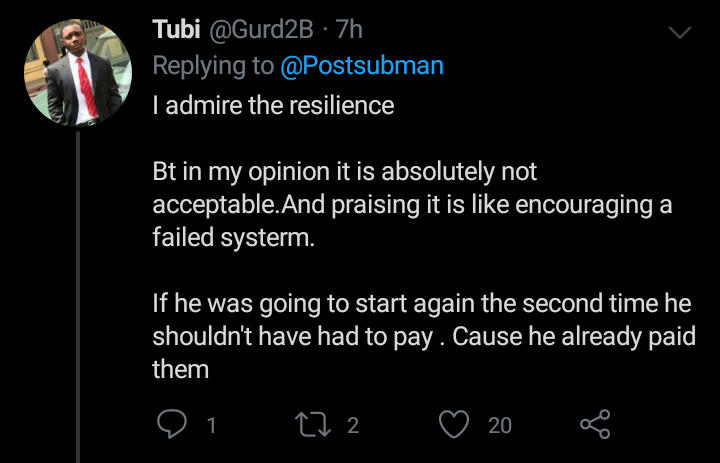 While the reactions and questions keep coming in folds, Aka, replied with more details to the ambiguous story. According to him, his HOD was responsible for all what happened to him and added that he had to rewrite another jamb to re-apply for the same course.

@MgbeahuruRanso1: I have read copious comments regarding to this story. There is more to it.A particular man who was then my HOD (now sacked) deceived me.He gave me a fake mat number . It is a long story. I didn't sue the man or the school. But I took the matter to Supreme Court of GOd...its well

@MgbeahuruRanso1: Yes I did. Scored 183. Applied for same course. This time around it was legit. Did everything by myself alone.

Some other replies are: Some other replies are 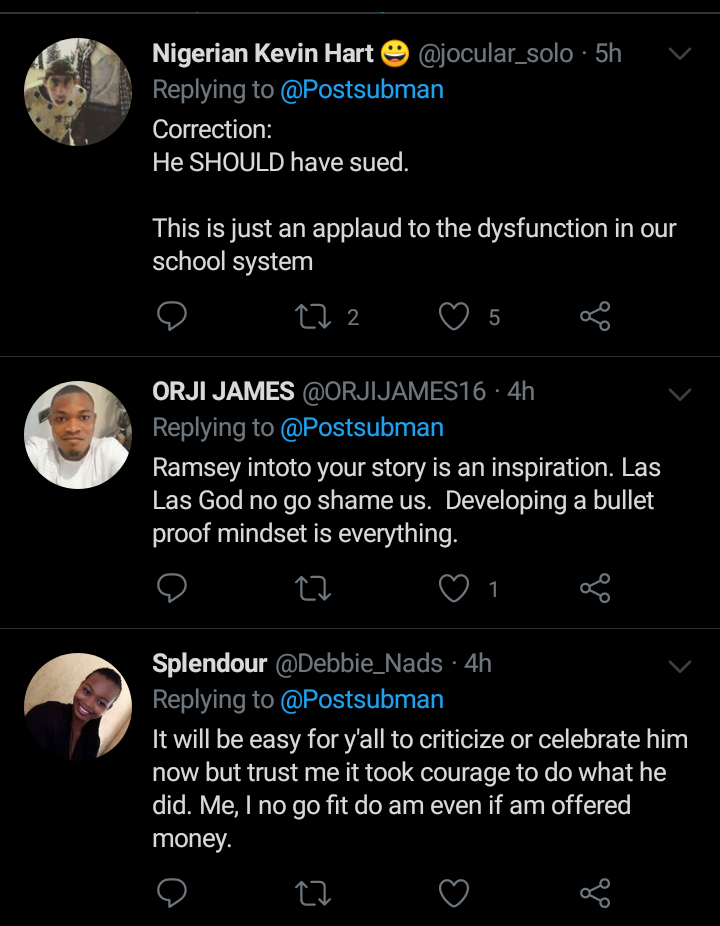 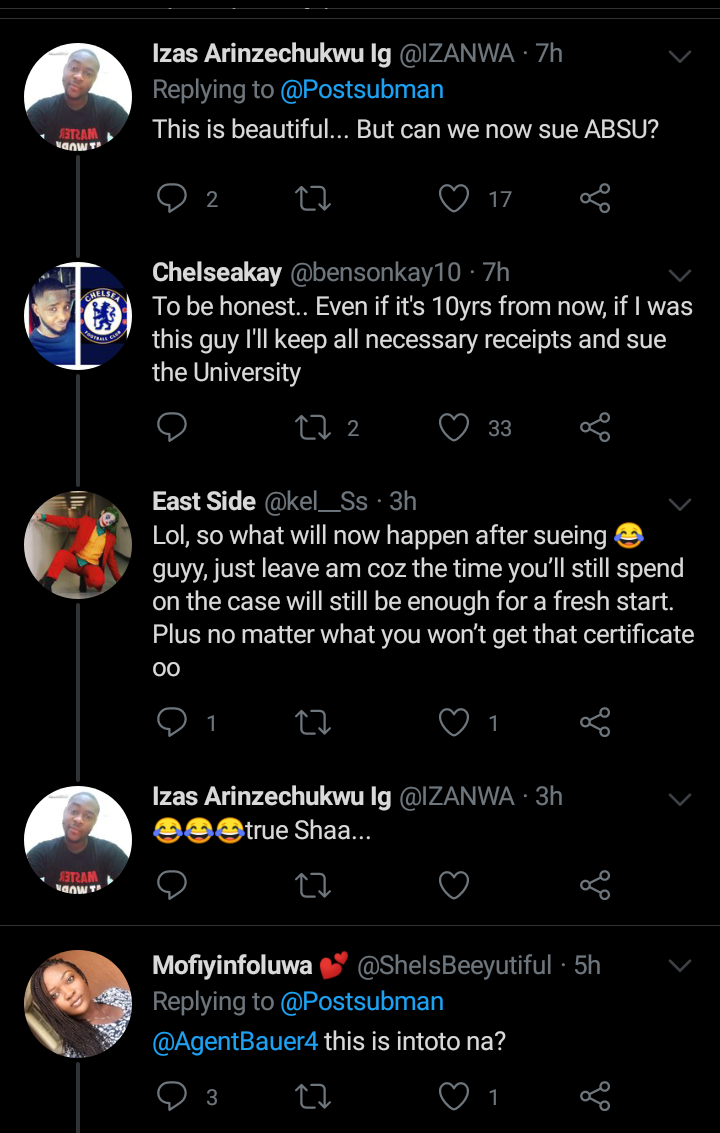 If you were in his shoes, what would you have done?