By WaterNewsGo (self media writer) | 5 days ago

The Delta State Government on Monday shut down schools in Asaba, the state capital for the Peoples Democratic Party’s presidential campaign rally in the state on Tuesday. 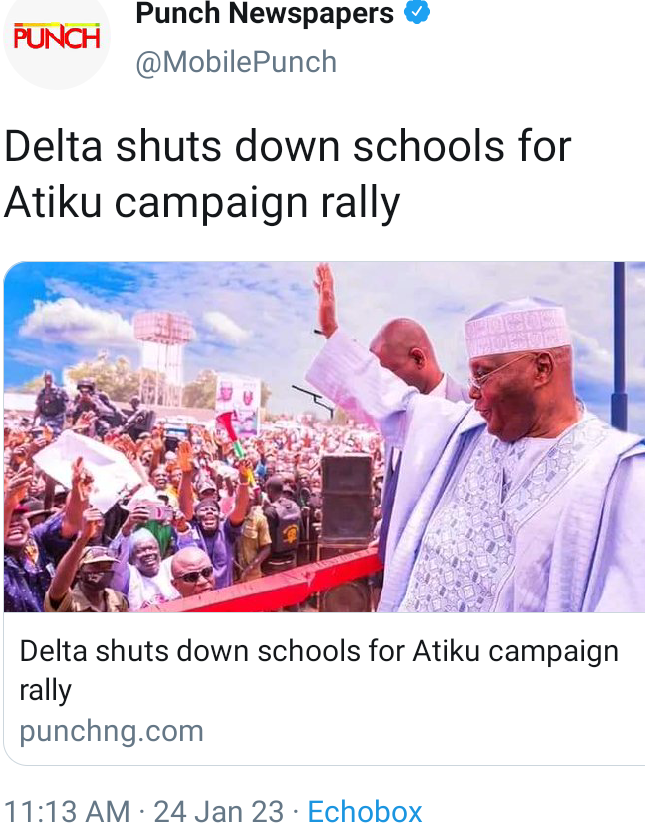 The management of various schools in the state told their students not to resume school on Tuesday in view of the visit of the presidential candidate of the PDP in Asaba.

However, Asaba especially Stephen Keshi Stadium the venue of the presidential rally and the newly constructed Koka fly-over have worn new looks in preparation of the visit even as the presence of security personnel in Asaba has increased.

The vice-presidential candidate of the party and Governor of Delta State, Ifeanyi Okowa, said there is an indication that Nigerians were truly tired of the inept All Progressives Congress led Federal Government.

Okowa, who stated this at the Stephen Keshi Stadium, shortly after inspecting preparations at the facility, said that PDP would provide Nigerians with all-inclusive and purposeful leadership that the country yearns for. 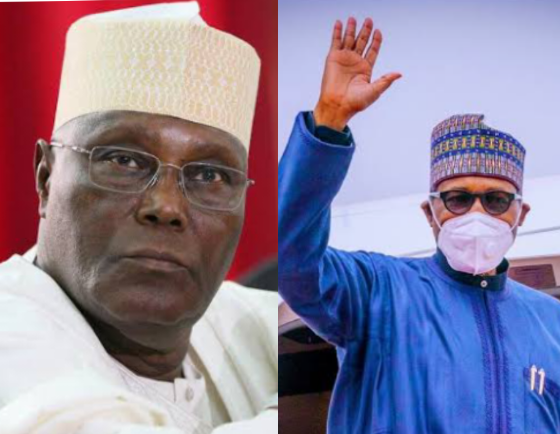 The President, Major General Muhammadu Buhari (retd.), will depart Lagos on Tuesday for Dakar, Senegal, to attend the second edition of the Dakar International Conference on Agriculture.

This is the President’s second visit to the West African country in six months. It will also be his second foreign trip in 2023. 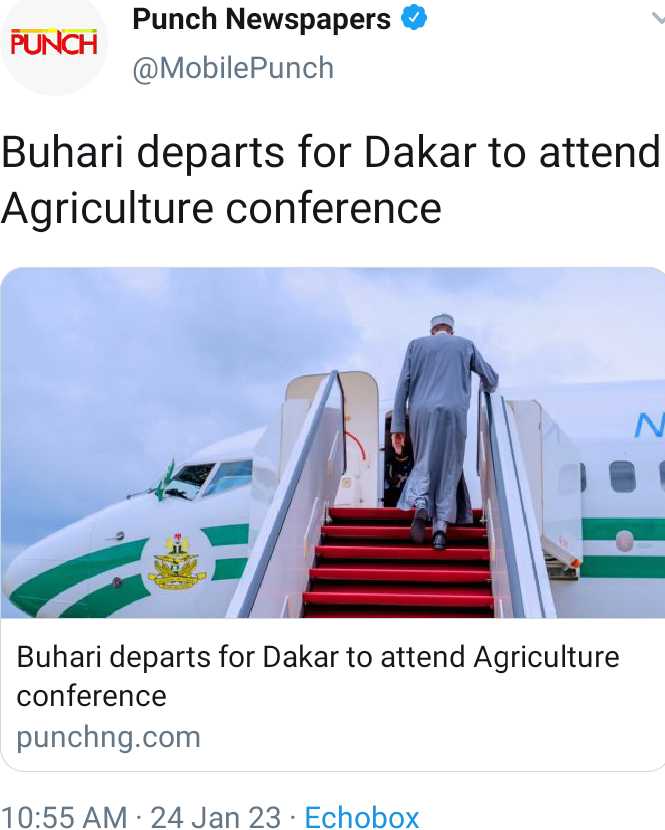 In July 2022, Buhari joined other African leaders in Senegal for the International Development Association for Africa Summit, which led to an outcome document, the Dakar Declaration.

This time, he is attending the high-level Dakar 2 Summit, hosted by President Macky Sall of Senegal, which the Chairperson of the African Union is holding under the theme “Feeding Africa: Food Sovereignty and Resilience.”

A spokesperson for the ruling All Progressives Congress Presidential Campaign Council, APC PCC, Femi Fani-Kayode there’s no evidence to back the People’s Democratic Party, PDP drug trafficking claims against Asiwaju Bola Tinubu, the presidential candidate of the APC. 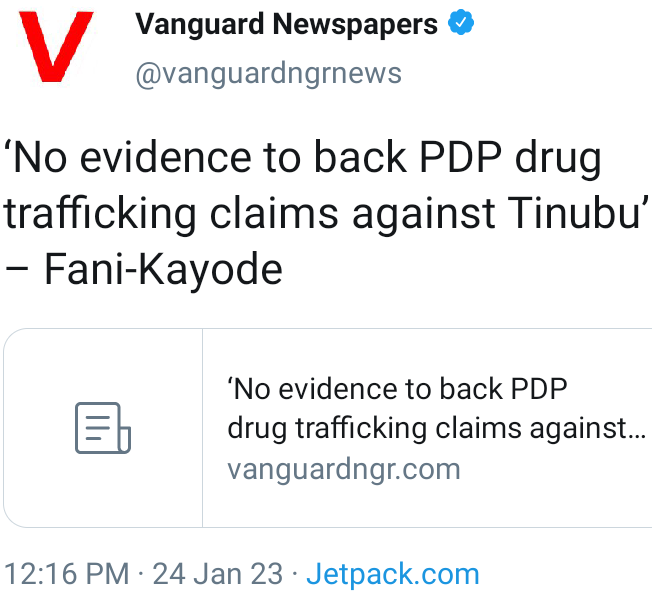 Fani-Kayode stated this in an interview on Channels Television’s Politics Today on Monday.

The former Minister of Aviation, who faulted the PDP for its suit challenging the candidacy of in the February 25th presidential elections, described the claims as baseless.

According to Fani-Kayode, the case is being initiated by the PDP as a smokescreen to deflect from the APC’s own case against the PDP presidential candidate, Atiku Abubakar, for alleged corruption.

Legal luminary, Femi Falana says a presidential candidate does not need to win the Federal Capital Territory (FCT) to be declared winner of the February 25, 2023 poll. 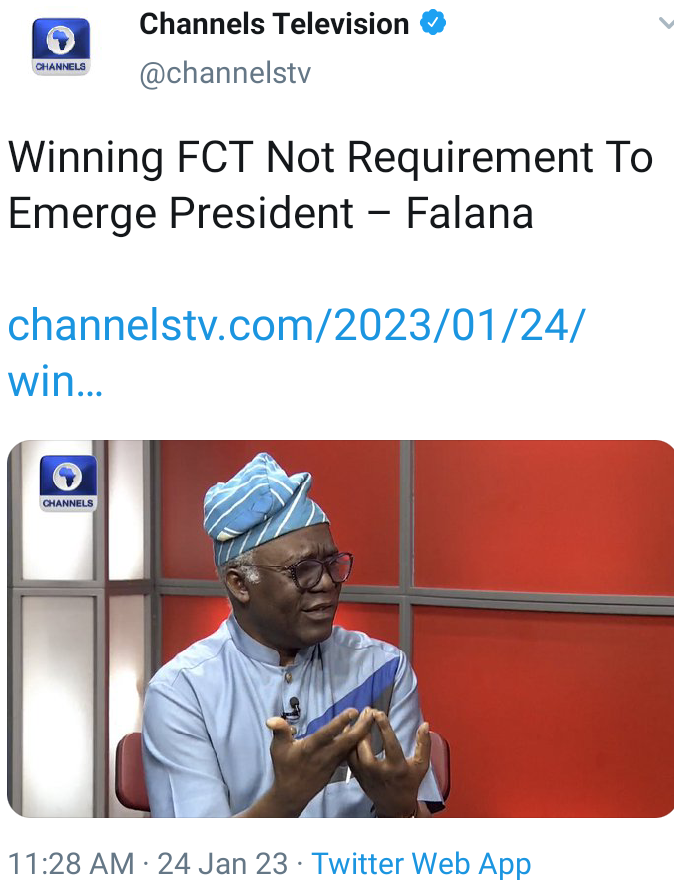 “It is not a requirement that you must win the FCT,” the Senior Advocate of Nigeria said on Channels Television’s Sunrise Daily programme on Tuesday.

“Today, the courts have ruled that pursuant to Section 299 of the constitution, that the FCT should be treated as a state. That is the law.

A former chairman of the Nigerian Bar Association (NBA), Olisa Agbakoba had last week asked the Independent National Electoral Commission (INEC) to clarify the commission’s position on Section 134 of the 1999 Constitution which seems ambiguous.

With just 32 days to the 2023 general elections, the Peoples Democratic Party (PDP) presidential campaign council said that it has asked a court of competent jurisdiction in the country to disqualify the presidential candidate of the ruling All Progressives Congress (APC), Bola Tinubu, from the presidential race. 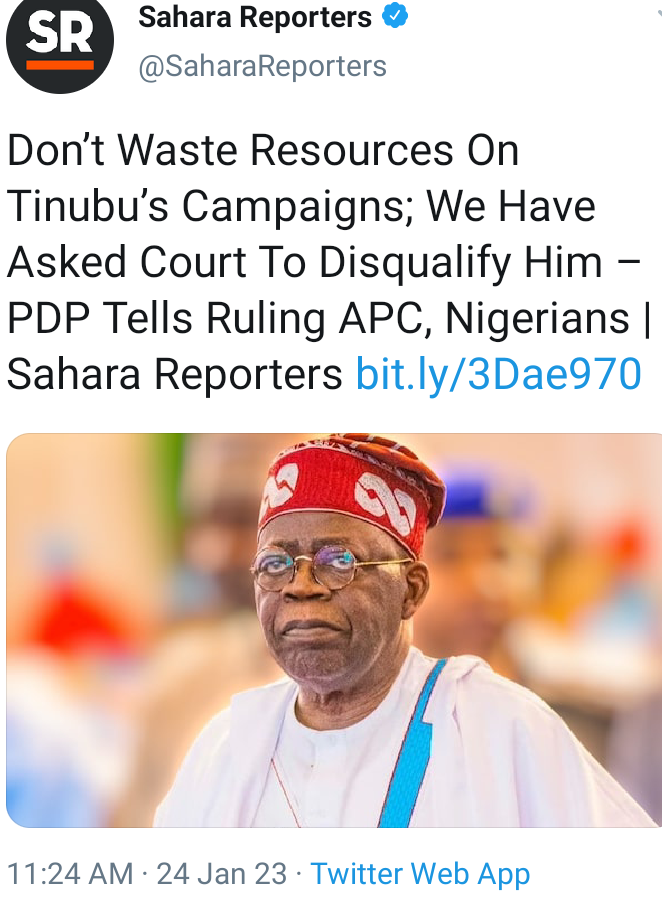 The PDP presidential campaign spokesperson, Kola Ologbondiyan, who made this known in a media conference on Monday in Abuja, said Tinubu’s forfeiture of his funds to the US government over drug trafficking allegation was an indication that the former Lagos State governor committed infractions that should disqualify him from running for an election in Nigeria.

SaharaReporters has reported how court papers from the US linked Tinubu to a drug trafficking case and his eventual forfeiture of the sum of $460,000 to the US government.

The documents on a case dating back to 1993 which made the rounds on the internet alleged that funds traced to the Tinubu were linked to proceeds of narcotics trafficking and further showed that the court ruled that the sum of $460,000 in one of the accounts be forfeited to the US government, which Tinubu reportedly did.