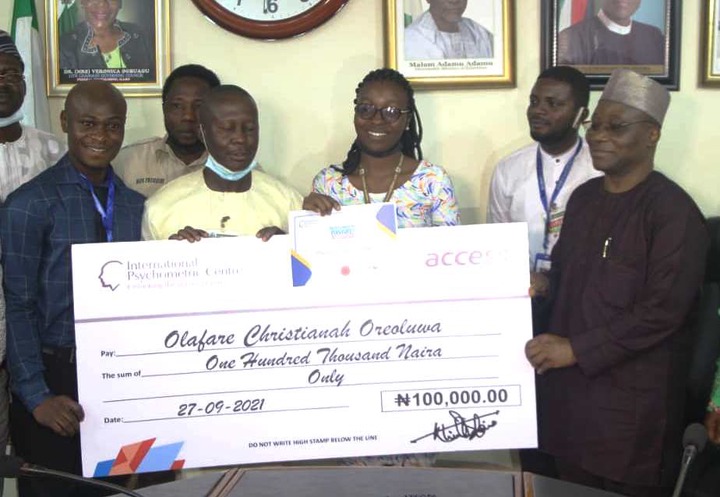 Olafare Christianah of Federal Polytechnic, Ilaro, Ogun State, has won the N100,000 worth of scholarship award by the International Psychometric Centre, Ibadan for overall best student in Psychometrics examination organised for polytechnic and colleges of education students in the country.

It was a big battle between three students, Olafare Christianah a Public Administration HND one undergraduate who eventually emerged top against Ahmed Oladipupo, an ND-II student that is studying Mechanical Engineering and Emmanuel Ajibode, HND-II student of marketing department of Federal Polytechnics Ilaro.

All the three students according to the corporate affairs manager of IPC, Patience Udoh scored the same marks of 90 percent and it took the efforts of the technical team of IPC that conducted the post examination oral interview before Olarafe scored a bit above the two after the second round of the oral examinations.

The rector of Federal Poly Ilaro, Arch Dr. Olusegun Aluko in his reaction during the award presentation done yesterday at the conference hall of the institution said that he’s not surprised that three of his students came out top with the same high marks because of the high academic standard of school.

“We are even looking forward to an opportunity where all tertiary institutions in Nigeria will write the same examination to be able to prove how good we are among the group of schools in the country, and psychometrics is in step in that direction and happy with their initiatives”, the Rector noted.

He added that “This scholarship award will definitely encourage our students to study more especially for a course like psychometrics that is being run online, that idea we have encouraged even before the advent of the pandemics’.

Deputy Director International Psychometric Centre (IPC) Ibadan, Timiletin Fashola in his reaction to newsmen after the presentation explained that Psychometric as a mandatory course was approved by federal government in 2018 for all tertiary institutions in Nigeria and not for only for polytechnic and college of education but the implementation in the universities slow because of incessant strike action, but they will be starting very soon.

“Regarding the importance of psychometrics to students; the twenty first century organizations don’t employ certificate again, if you graduate with first class or two-one does not guarantee that you will excel, the organizations have seen that they will recruit first class graduate and they will not do well but will employ graduate with lower credit and will perform wonderfully well, which implies that the tendencies for graduates to perform in an organizations goes beyond certificates”, said Fashola.

He stressed that “this is what psychometrics introduces to the students, psychometrics will makes you to identify your ability, it will make you to identify what you’re good at; for example, if you studied banking and finances, it does not mean you will excel in bank, you might do better as an entrepreneur”.

He noted that the scholarship award program has been done in four polytechnics which are Federal Polytechnics Bida, Akwa Ibom Polytechnics, Gombe State Polytechnics and now at Federal Poly, Ilaro and in the next two months we will cover four other higher institutions.

Also reacting, the National President of the Polytechnic Students Union, Comrade Oladere Benedict thanked the IPC center Ibadan for introducing the online course to the schools’ curricular because of its positive impact in making students realize what and where they’re good at, which is a good component in making the right career choice.

He however thanked the National Board for Technical Education (NBTE) and the National Commission for Colleges of Education (NCCE) for key fully into the accreditation of the course saying students of Polytechnics are brilliant and important to the economic growth of the country via technical education.

“What we witnessed here at Timiletin Fashola where three students scoring the same high marks has shown that Polytechnics students are brilliant and if Federal government can focus more on the technical education by pumping more funds the Nigeria we are dreaming of will soon become a reality”, said the NASPP President.