Daughter Of Popular Fuji Artist Tackles Igboho and His Supporters

By Intuned (self media writer) | 1 year ago

The Daughter of Famous Fuji artist Wasiu Ayinde famously known as 2K1 d Ultimate" has weighed in on the controversy regarding Sunday Igboho.

According to a post on Instagram released on her page, she stated that, ‘anyone donating money in order to unsettle Nigeria will never know peace’.

The daughter of the Popular singer had made the statement amidst claims that Sunday Igboho had called for donations to assist in his quest of riding Fulani herdsmen an banditry from Yoruba land . 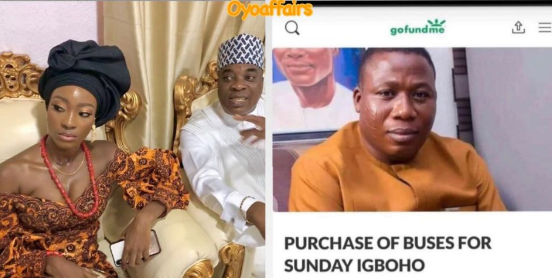 There has also been reports that Igboho’s supporters had already raised aa huge sum already. In her own words, “as a History student, I have knowledge of the Ife Modakeke crisis, where Igboho was an active participated”.

Damilola also faulted Journalists and DSS for joining Sunday Igboho to fan the ember of discord in Nigeria.

It now seems that as laudable as Sunday Igboho and his quest is, not all Yoruba people are in support of him.

Content created and supplied by: Intuned (via Opera News )