Learning new languages can be a very difficult especially if you lack patience. Nigerians are typically bi or multilingual due to its diversity. An average Nigerian can speak English, Nigerian Pidgin English (I consider it a language since native English men and women can't speak nor comprehend it) and their native language. I can speak English, Yoruba, Pidgin English and Igbo fluently while I speak Spanish and French less fluently and I'm an adult. Well while some of us struggle to learn foreign languages, some cute babies have mastered not one but seven languages. 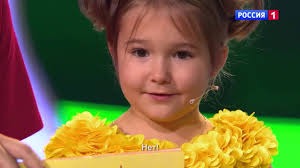 Children are very innocent and studies have shown that they learn languages better. This is the case of the little seven years old Bella Devyatkina who speaks six languages plus her native Russian language. Picture: Bella Devyatkina on a talent show at four.

Bella Devyatkina is a Russian girl from Moscow born on August 3, 2012 to Yulia and her husband. She speaks Arabic, Chinese, German, Russian, French, Spanish and English. 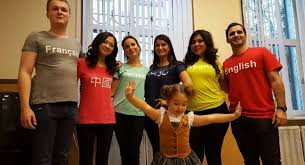 Picture: Bella Devyatkina and her teachers. The language they teach is on their shirts.

Yulia insisted in an interview that she has those ability due to the fact that her father and her started teaching Bella English when she was only two years old after noticing her interest in the language and the ease with which she picked up everything. As time went by, they began adding other languages for her and hired native tutors for each new language. Her mother also confirmed that she was three and a half years old when she began speaking two languages and mastered two more in the next six months. Since coming to the limelight, Bella Devyatkina have appeared on several TV talent show and has never disappointed both the judges as well as the viewers. How many languages could you speak when you were her age?

How many languages can you speak now?