By Femfirst (self meida writer) | 14 days

Months after her successful movie premiere Fate of Alakada, and also still basking in the euphoria of the successful premiere of a new movie titled the 'Prophetess' produced and directed by Niyi Akinmolayan which Toyin Abraham stars as the lead cast in it, is said to have made over N43million in opening weekend. 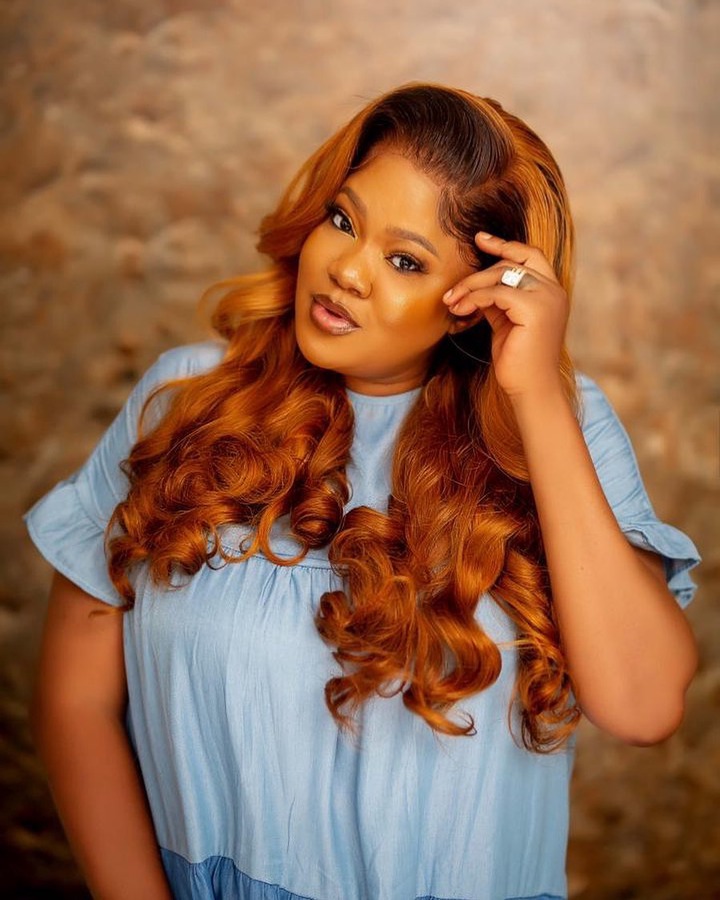 The actress who's married to her colleague in the industry Kolawole Ajeyemi, some couple of hours ago posted on her Instagram account as she disclose to give back to some of her fans in Nigeria that are fondly called "Toyin Titans" according to the mother of one she plans to empower some of her fans, by giving them food stuffs, money, trainings, cash donations for business that may need financial support, sewing machines amongst others. 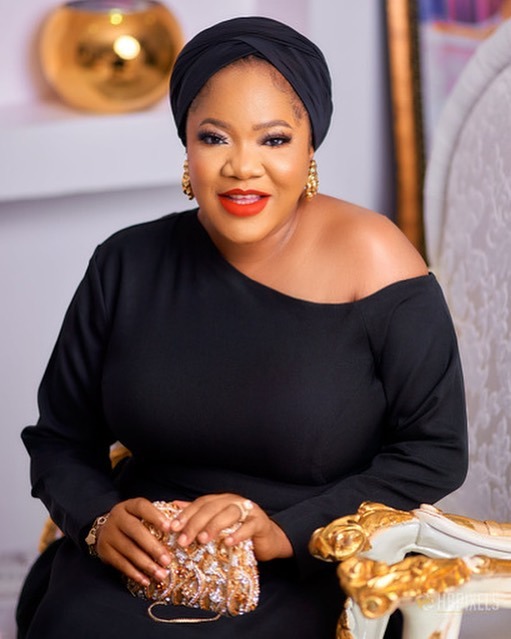 She further revealed that there'll be free make up trainings for 'Toyin Titans' in Lagos, Ijebu Ode, Abeokuta and Ibadan, also Five Toyin Titans that may be interested in acting would have the opportunity to be in her upcoming series, as the lucky winners would be picked from her Telegram and WhatsApp groups. 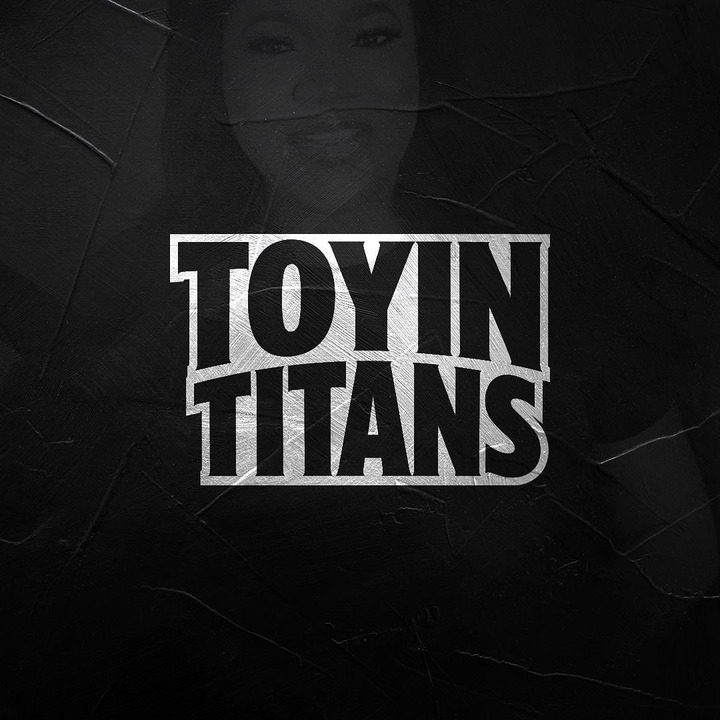 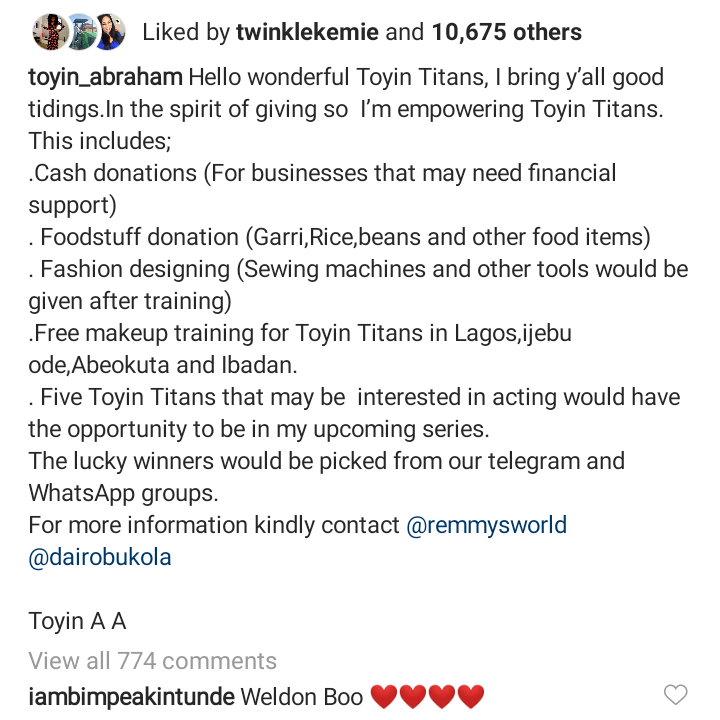 It will be recalled that Toyin Abraham gave out foodstuffs to large numbers of her fans during the Covid19 lockdown this time last year. And her fans are grateful and happy for giving birth back to them in cash and in material, as they've all showered him with a lot of encomiums. See some reactions below. 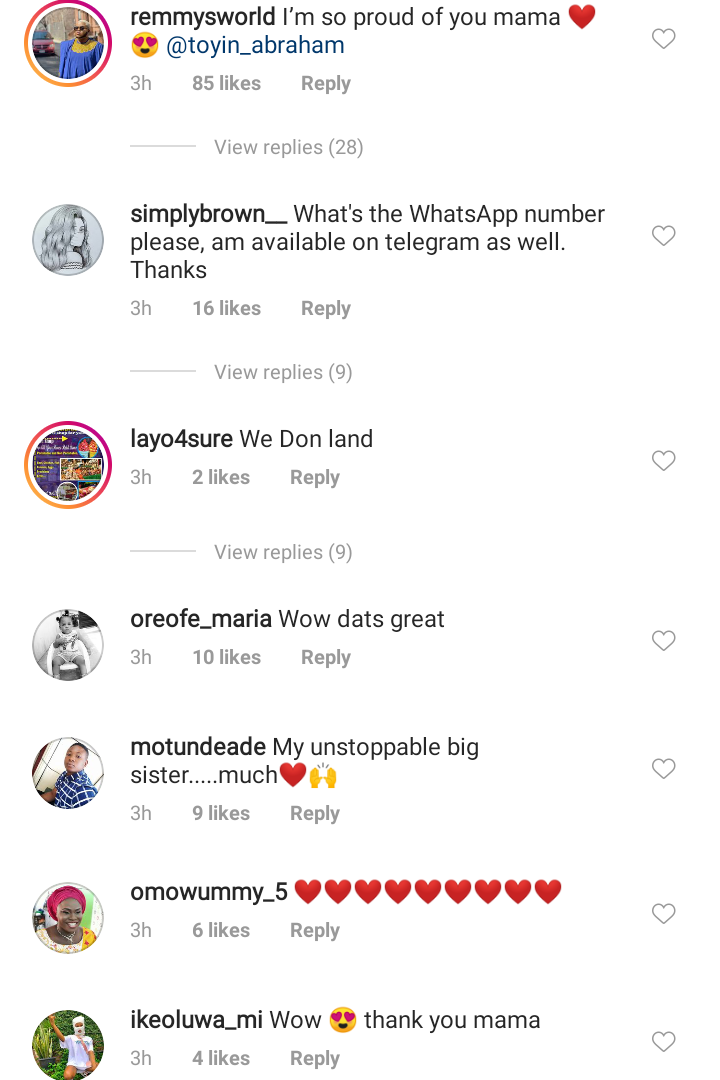 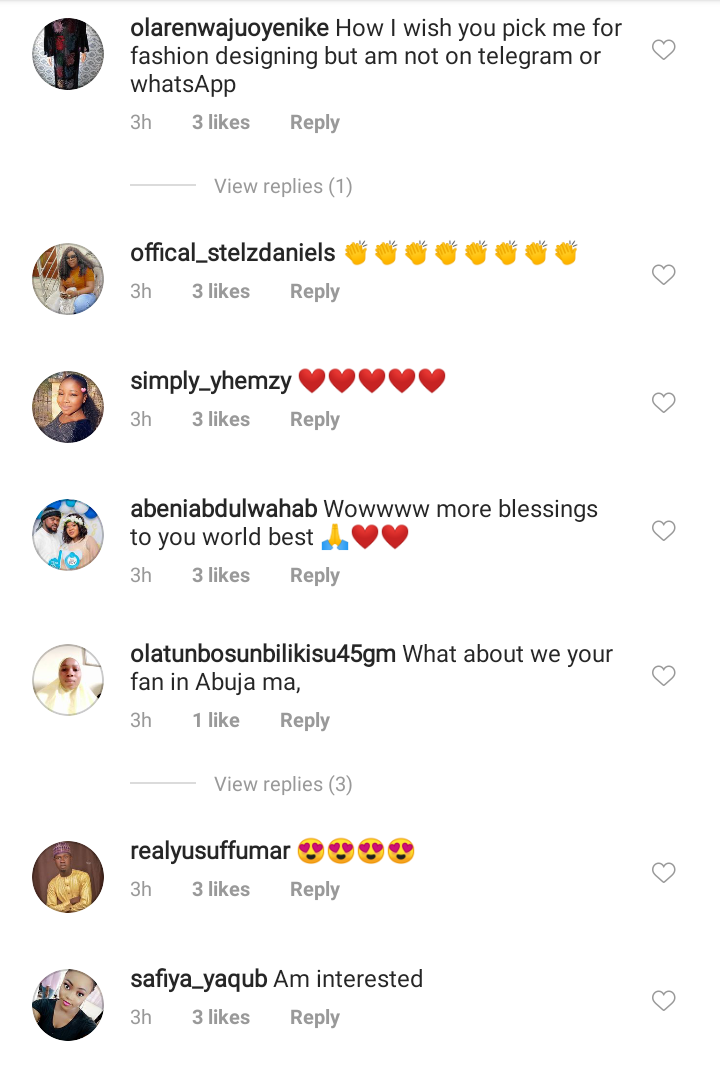 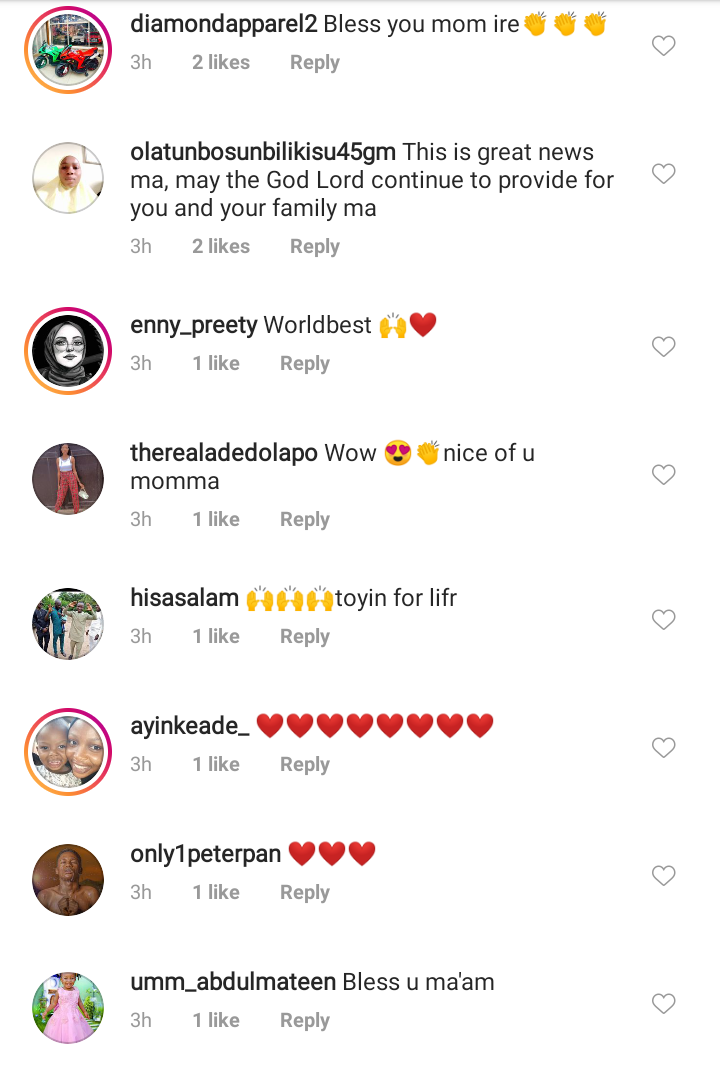 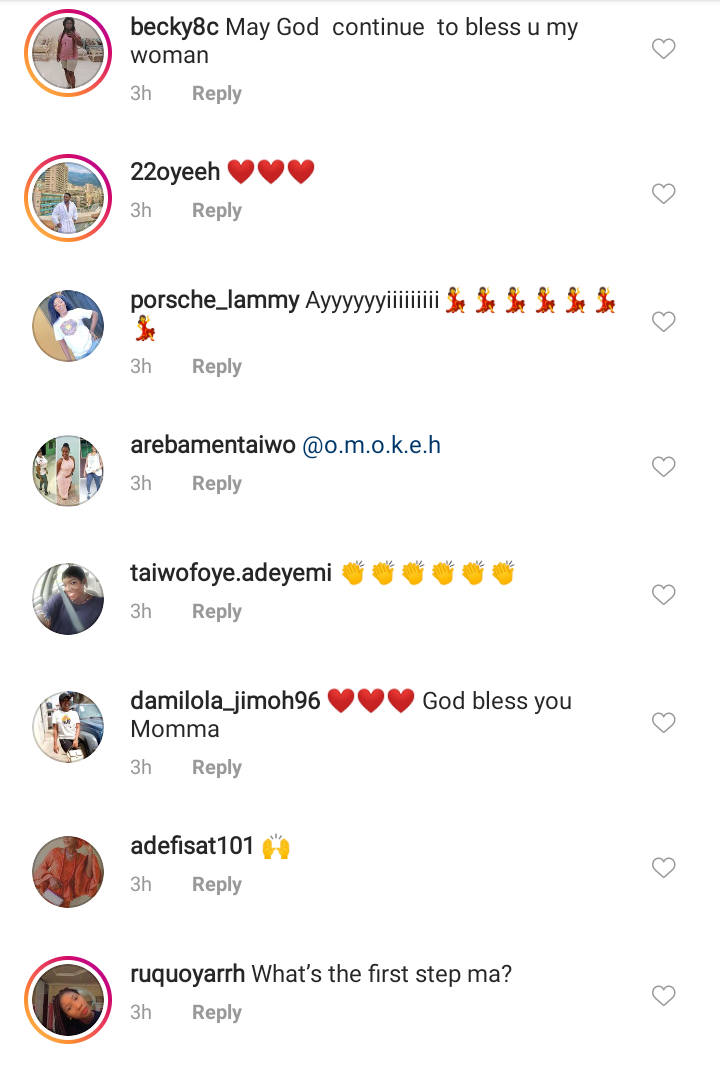 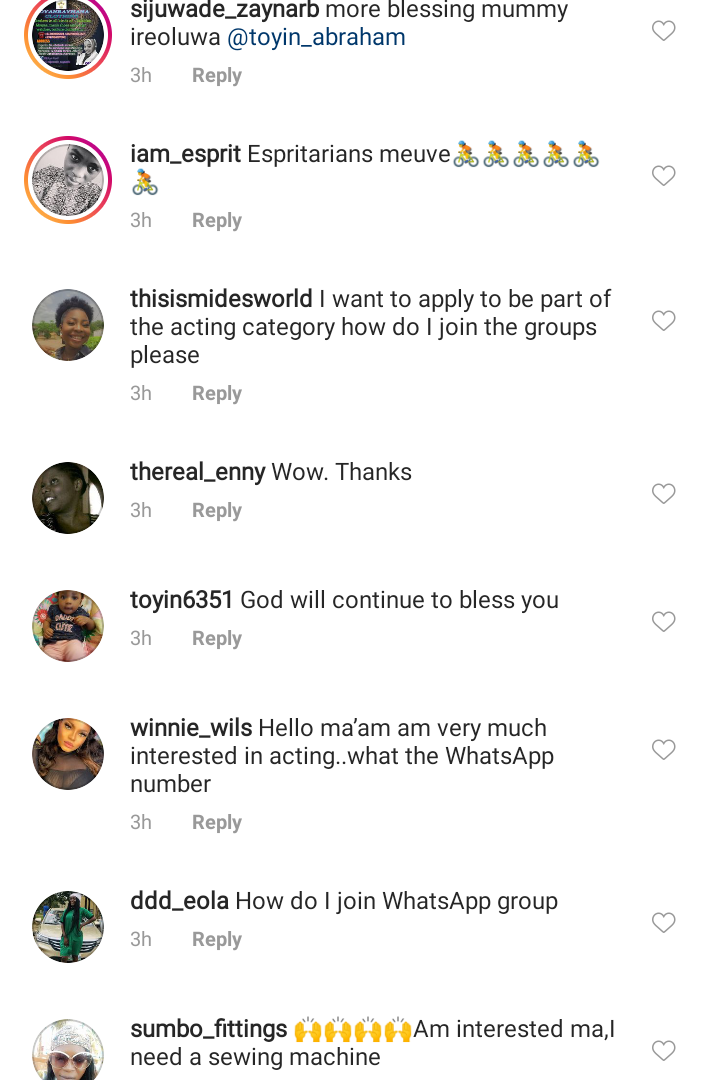 Meanwhile, her lastest movie 'The Prophetess' which is produced by Niyi Akinmolayan which was shot in Ibadan, is really making waves all over the internet and stars actors like Kehinde Bankole, Kunle Remi, Ronke Ojo, Tina Mba, Stan Nze, Uzor Arukwe, Deyemi Okanlawon, Adedimeji Lateef, Blessing Jessica Obasi, Seyi Awolowo, and Toyin Abraham, among others.

Photos Of Actress Maryam Turatu With Her Boyfriend At A Mall

Reactions As Actress Lizzy Anjorin Shares Loved-Up Video With Her Husband, Prays For Him In New Post

Mercy Johnson, Destiny Etiko And Others React as Chacha Shows of Her Baby Bump in New Photos