Story : A Client From Hell 3

EPISODE 3: A CLIENT FROM HELL 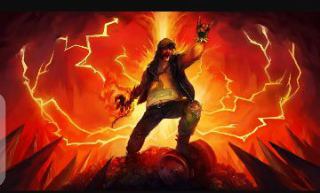 As I walked through the staircase I felt the stinking smell of piss hit me like a drunk driver on a Friday night. Even though I couldn't see where I was because of the blindfold, I knew for sure this place was hell. When we got to the room, the guard pulled off the blindfold and just like the room I just left, this room was also without windows and stinked just as much. The curtains were horrifying to look at and it was totally dark. One couldn't tell if it was day or night.

I saw Linda sitting at a far end of the room, she looked like she just ate a demon, her eyes were bloodshot red, her face had no emotions and she was sweating profusely, her flowing hair was now tied in a tight knot, she held what looked like a small machete and not to forget she was completely Unclad.

She beckoned for me to come closer and as I did, I saw a young man sitting beside Linda. He looked very weak and there was blood on his cheek and forehead. His eyes were closed and I guessed he couldn't be more than 25 years old. His hands were tied behing his back and a kind of thick cord tied his legs to the chair he was sitting on. He must have been tortured because I noticed all over his skin were whip marks.

''You look extremely cute'' Linda blorted out, taking my attention away from the young man. ''I love the way your skirt clings to your thighs'' Her face still emotionless

''Where is your husband'' I asked, still totally confused.

''Oh, sorry for my manners. Meet Caleb, my husband.'' As she spoke, she slapped the young man accross the face and screamed his name. He winced in pain, tears flowing down freely and I'm sure he would have screamed if he could. His mouth was gagged.

I couldn't believe Caleb was her husband, he looked so young and I'm sure Linda is way past 45. Linda was now stroking him, ''Its time for you to start'' she said to me.

Linda walked towards me and pulling my hair down so hard she brought my ears straight to her mouth, ''What I paid you for, you Dam!''

''I am not going to do anything'' I screamed, the irony of her insult totally rubbing off on me. She looked at me like someone who recieved an olympic size, 23 seconds knock out punch, she was totally dazed and shocked. But that was just for a moment, in an instant flash and with a speed out of this world she lifted her hands and let the side of the matchete she held hit my cheeks with a brutal force that sent me sprawling to the ground.

I felt my cheek burn and I might have broken a tooth. It was a miracle I didn't faint. I lied on the floor not wanting to stand up and desperately wishing this would be a really bad nightmare and I would wake up to reality any moment now. But I didn't, the sound of Linda's angry voice jolted me back to reality,

''You'll do whatever I tell you to without any question. Do you understand me?'' She raised the machete over her head, I quickly shook my head in affirmation and moved away from the reach of the machete.

''I'll do whatever you want, please just don't hit me with that'' I said as I broke into sobs. I stood up and walked towards Caleb. His eyes were closed again. I reached for his hands as gently as I could cos he was in so much pain. He opened his eyes slightly and shook his head in a way people do when they have regrets. I avoided looking into his eyes as I knelt down and cupped his hand round my right breast.

As expected, this seem to just give him more pain. I paused.

''Continue'' I heard Linda's voice from behind. ''Pull of your dress, I'm sure Caleb would love to see that space inbetween your thighs, or Caleb, won't you?''

Caleb shook his head as if to say no but that doesn't matter. Linda is the boss here and we can only do her bidding. I was not ready to get Unclad so I stalled. I pulled of the top two botton of the shirt I wore so that my breasts were slightly visible. I was wearing a white bra and then I placed Caleb's hand inside my shirt, his hand roughly touching my breasts, my tips stood on edge, not from pleasure but from disgust.

Linda seem to like this as I heard nothing from her so I continued. I used his hands to drag my bra down and pressed his hands on my right Tip, while at the same time pulling of the hook from my bra. A large portion of my breasts were now bare. I grabbed his second hand, placing it on my other breast. I was using his hands to rub my breasts and even though he seem to be in pain, I didn't care. I was determined to stall.

Just when I thought I was having my way, I recieved a thunderous slap from Linda, followed by a kick in the head.

''I said you should get Unclad'' she screamed.

I felt my head get really heavy, my hands wouldn't move, my heartbeat started to slow down, my eyes began to close. I blacked out.

* Your likes and comments as you request for EPISODE 4...

Content created and supplied by: Sophia_55 (via Opera News )