By Vchimex (self media writer) | 2 years ago

In May 2020, Cory Williams—a comedian, musician, and YouTuber—invited cameras into his bathroom to film something very peculiar. As if that scenario doesn’t sound odd enough, what actually unfolded was even weirder than you’re probably imagining. Cory first provided some instructions: find a large bathtub—even a kiddie pool would work—and fill it with scalding-hot water. Then, as he put it, “it’s time to add the magical ingredient.” Just what could that be?

The special ingredient was… ramen. Seriously. He dumped it right into his jacuzzi! Soon, the hot tub water softened the noodles, and a thin layer of cheap pasta covered the surface. That’s when things got really weird.

Once the noodles were al dente, Cory hopped into the water and vigorously scrubbed at his arms and face with the ramen. Later, he described the experience as “actually quite relaxing.” But that begged a question: why, dude?

Was it just a comedy bit for a highly-watched YouTube channel? Maybe—but not entirely. See, pasta baths weren’t a thing simply cooked up by one attention-seeking YouTube personality…

Ramen baths like Cory’s were actually becoming quite popular. Though the origin of this odd practice couldn’t be precisely pinpointed, many articles credited Ichiro Furuya, owner of the Yunessan Spa House in Hakone, Japan, as the leading figure spearheading the movement. Ichiro’s spa didn’t only offer ramen baths for its patrons’ amusements, either. A number of zany, off-the-wall treatments included sake baths and even wine baths, as pictured here. But that wasn’t the weirdest one…

There were even chocolate baths! For just 3,500 yen—or about $29—attendees of the world-famous spa could actually stew in actual chocolate. Wonder if anyone indulging in this would be considered a chocoholic?

Believe it or not, this all wasn’t just some throwaway, novelty idea; it actually came with a medicinal purpose. “Lately, people are very concerned about having beautiful skin,” Ichiro said. 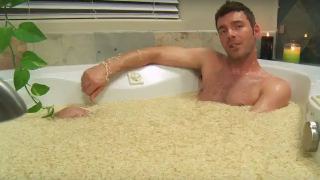 He added, “And they know the effect of collagen, which is contained in our pork-based broth. At this bath, everybody can have fun and take advantage of the healthy elements of ramen noodles.” Huh? Healthy? That couldn’t be right… could it?

Author Susanna Forrest more or less answered that question. While compiling research for a book, she stumbled across a bizarre 19th-century German passage that had her calling a professor for help.

The professor confirmed her suspicions: the passage she’d found told of children bathing in horse broth. She dug further and found some additionally fascinating information about the topic…

As Susanna wrote in a piece for Atlas Obscura, “Broth bathing appears to share a tandem history with ‘hydrotherapy,’ the therapeutic immersion of the body in warm mineral water.” In fact, 19th-century doctors once prescribed hydrotherapy for mercury poisoning! 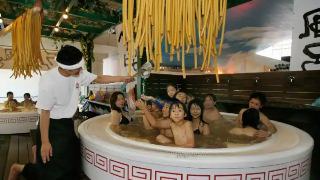 Susanna continued, “Physicians believed that skin was permeable, so if mercury could seep out, then surely the hearty properties of spring water or bouillon could seep in.” Surprisingly, the treatment caught on.

By the mid 19th-century, legitimate medical texts discussed the benefits of broth bathing. Stories of sickly children who regained strength after a broth bath spread far and wide—even to America. But was this legitimate?

Susanna provided anecdotal broth bath support from her friend. “On a research trip in rural Armenia, she met an Assyrian woman who followed local practice and bathed her baby boy in beef broth ‘to strengthen his bones,'” she wrote. “The baby thrived.”

So how exactly did this work? Well, Ichiro mentioned his broth containing collagen, which was a key factor. Naturopathic doctor Kellyann Petrucci would attest to the protein’s health benefits…

“Collagen is a protein that’s a major building block of your skin, bones, and connective tissue,” she said. “This is why it’s smart to start adding collagen to your diet as you age.” Thankfully, supplements are easy to find in stores. A 2019 study backed up the benefits of collagen supplements, too. So maybe it’s not so crazy to think a bath in a tub of piping hot ramen soup—flavor packets included—might actually give you smooth skin and iron-tough bones?

Adding the noodles themselves to your broth bath might be a little overkill, but you’ve got to admit, they’d probably make for a killer loofah.

Content created and supplied by: Vchimex (via Opera News )