After Donating 3 Trucks of Snacks and Water To Protesters, See The Replies Mama Adeboye Got 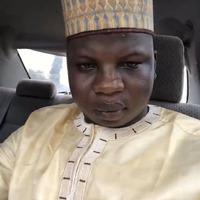 Wife of Nigerian pastor Mrs. Foluke Adeboye today joined the list of influential Nigerians who have donated either in cash or kind to the cause of the Nigerian youths.

You will all recall that presently as we speak, the youths and other well meaning Nigerians are currently on a nationwide protest against police brutality. 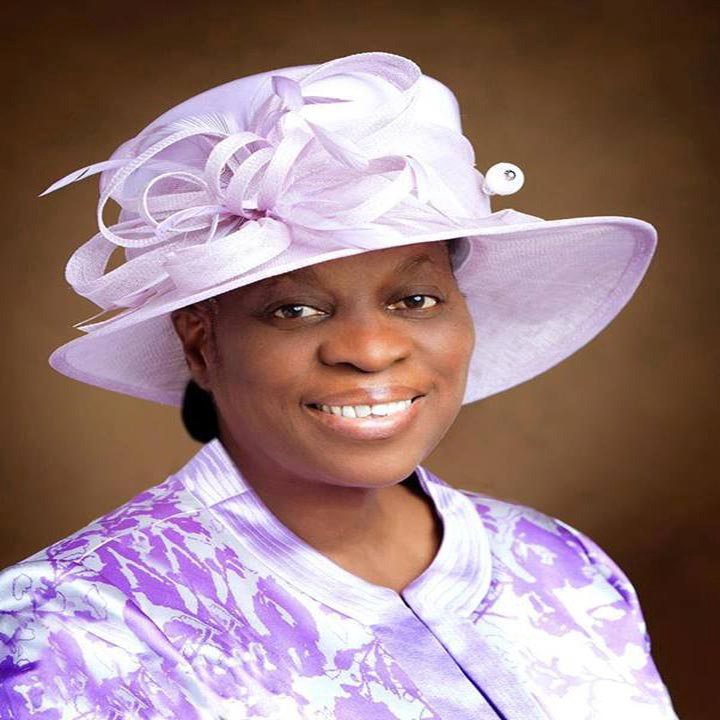 Ever since the protest commenced the previous week, there has been a massive turnout as youths across states in Nigeria rally round to lend their voices towards stopping police brutality.

Also, since the protest started, there has been a huge amount of donation from well meaning Nigerians which is in turn used for feeding and providing one or two necessities for Nigerian protesters. 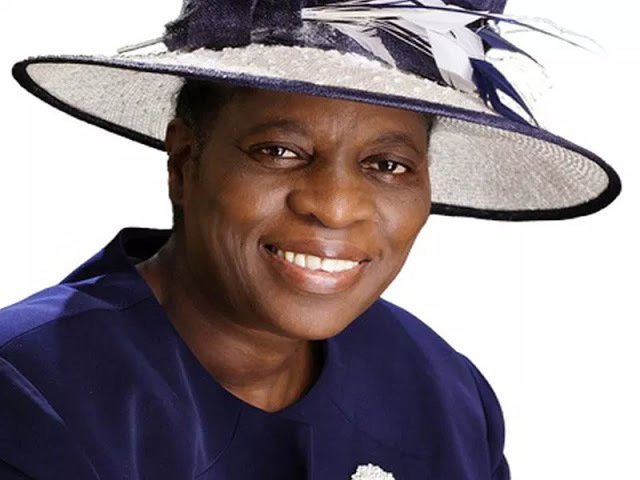 While the identity of some of these cheerful givers are not known, that of others are publicly stated for everyone to see. One of those who had given out to protesters include wife of the the General Overseer of the Redeemed Christian Church of God Mrs. Foluke Adeboye.

Her donation was made known by one of the food vendors saddled with the responsibility of providing food and refreshment at the ongoing protest known as Iyameto food and events. 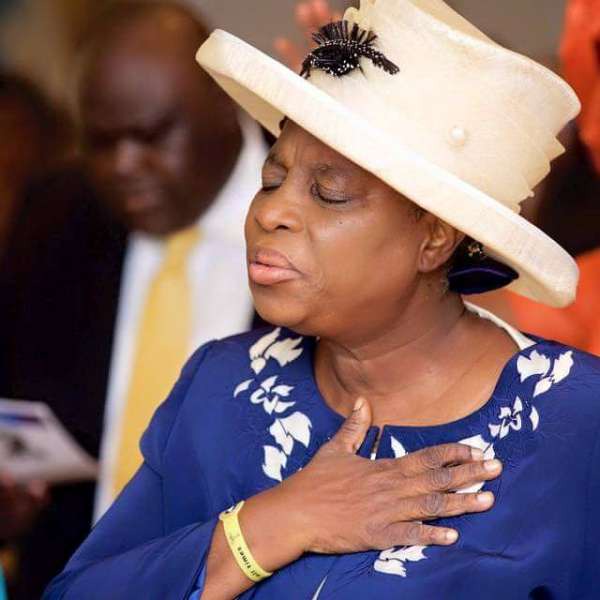 She took to her twitter handle as she made the donation known. She wrote "Mummy G.O sent in 3 trucks to Alausa this morning. We have 27 packs of bottle water, 1,000 of pure water & 27 bags of puffpuff directly from RCCG camp. We see it, we appreciate it! #EndSARS #AlausaProtest" 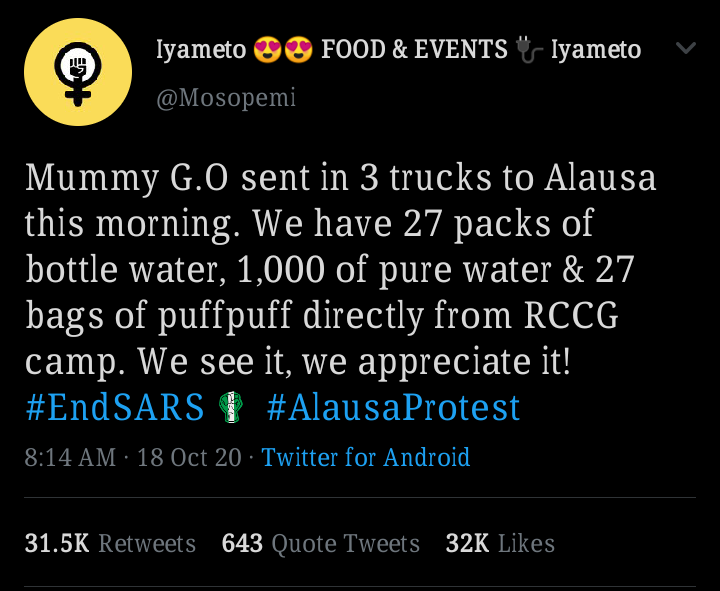 Reacting to the news, some Nigerians feels such donation wasn't enough while some others thanked her for her kind gestures. Others in turn remained indifferent because according to them the current vice president of the country is from the same church.

Here are some of the replies

Baba Abbey "Did she send her children to join the protest? If the answer is no: sit down and think deeply " omo olomo ni won ma nran ni ise de toru toru" (they could only send children of another errand that would make such child to tarry outside till late in the night"

Samuel O. Williams "Upon all d money wey she & her husband don make from church members, na pure water & puffpuff dem fit give. People wey nor reach dem dey cook better food with chicken and all. Are u expecting people to thank her for puffpuff of ₦50 and or bottle water/pure water of ₦50/₦10?"

Gloria Godwin "Okay. After giving us a donkey as Vice President, this reason the youths voted and re voted for this government."

Princessyheenk4 "God bless our mummy . pls keep us in ur prayer ma . greeting to our Daddy GO."

birthday wishes for loved ones cash out how much is lasu school fees jonathan goodluck kazaure
Opera News is a free to use platform and the views and opinions expressed herein are solely those of the author and do not represent, reflect or express the views of Opera News. Any/all written content and images displayed are provided by the blogger/author, appear herein as submitted by the blogger/author and are unedited by Opera News. Opera News does not consent to nor does it condone the posting of any content that violates the rights (including the copyrights) of any third party, nor content that may malign, inter alia, any religion, ethnic group, organization, gender, company, or individual. Opera News furthermore does not condone the use of our platform for the purposes encouraging/endorsing hate speech, violation of human rights and/or utterances of a defamatory nature. If the content contained herein violates any of your rights, including those of copyright, and/or violates any the above mentioned factors, you are requested to immediately notify us using via the following email address operanews-external(at)opera.com and/or report the article using the available reporting functionality built into our Platform 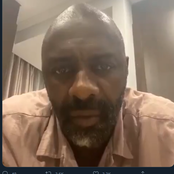 See the pictures of Sanwo olu's family house, NPA and police stations all set on fire by protesters. 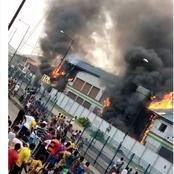 Pope Francois's Support for same sex marriage is not Biblical 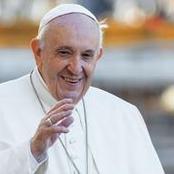 #ENDSARS: What I witnessed today in Asaba as protesters set fires to tires and blocked the roads Photos of Mbaitolu Police Station that was set Ablaze 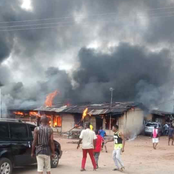 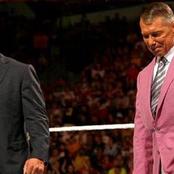 "He Should Replace Buratai": See Pictures Of Army Officer Calming Down Angry Protesters Covid-19 Palliatives And Other Items Meant For Citizens, Discovered In Oba Akiolu's Palace 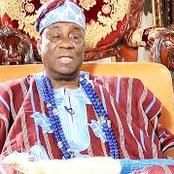 "For Me If You Say Endsars, You Mean End Security" Man Reveals 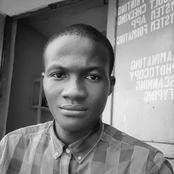 Lekki Killings: Why the Whole Government Must Step down-Burna Boy 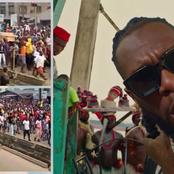