How cruel can one be?

By Faith-Koobee (self media writer) | 7 months ago

Today's review will be about the movie Cruella.

Ever since she was a little girl Estella was known to give back to the world what she receives. She was not one to be bullied as she always fought back. She was also a kid that could always stand outbecause of her weird looking hair colour.

Estella also had a mean side which was named Cruella, as the name depicts, it was one that suits it owner. Apart from being the nasty always fighting kid ( which eventually got her expelled from school) Estella had a flair for fashion.

After being expelled from school or withdrawn as her mother would say, Estella and her mother had to move out of town and also ask for help from a freind. Estella was left in the car as her mother went to speak to her freind, and as always she didn't listen to her mother, and as expected and left the car against her mother's rules. She gatecrashed a party and had to run away from dogs which eventually killed her mother by pushing her off a cliff.

With guilt a over for leading the dogs which killed her mother out, she ran and she hid in a van and criying herself to sleep, blaming herself for not listening and being the cause of her mother's death. 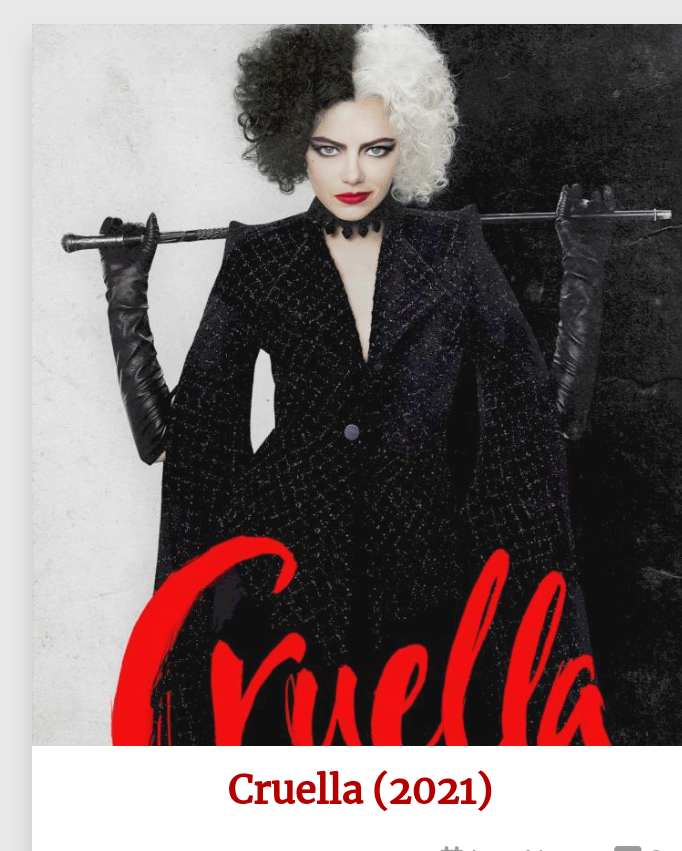 After a long travel, she arrived at a destination, she made friends and adapted to the new world by stealing to make a living.

Above all this, her flair for fashion never decreased and she always hoped to design for the 'house of the baroness' one day.

As her dreams would have it, she did have a job at the fashion designer's stall as a cleaner. She made a scene that dragged the attention of the baroness into hiring her. She was happy, fulfilled and wished her mother was here to see her as she was at the peak of her dreams.

Everything was going on well until oneday she saw her dead mother's necklace on the baroness' neck, one that she thought she had lost when she was escaping. Determined to take it back, she was forced to bring out Cruella. On that same night of the theft, she discovered the worst, it was the baroness who killed her sweet mother. This time it wasn't only the necklace that mattered. Cruella wanted revenue and revenge she would get.

A lot of episodes ran by but Cruella captured each moment as she was known for upstaging the baroness in the fashion world, she was the talk of the town. Cruella eventually destroyed the baroness' signature piece which was always released every year. That was the last the baroness would hear off. The baroness determined to get back her revenge decided to find out who truly was "Cruella" and of course she did. It was her favorite designer Estella. As it was that the baroness has always done, i.e getting rid of her competitors by any means necessary. She set up Estella's house on fire with Estella in it, tied of course and framed Estella's freinds for the murder.

As it was expected, that cruel people would always be cruel, the later was the case.

Please drop your comments on how you see this review?

Content created and supplied by: Faith-Koobee (via Opera News )