By Avison (self media writer) | 3 years ago 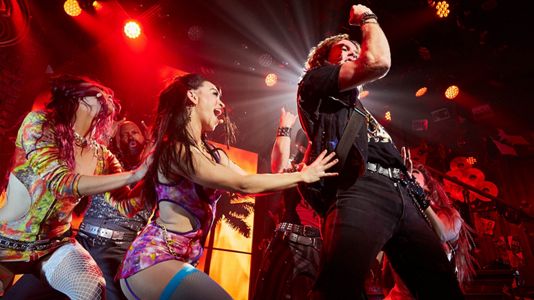 Photo courtesy of Rock of Ages.

HOLLYWOOD, Calif. — Matt Weaver is tapping his foot to this song as if he hasn't heard it thousands of times.

After three years of creating and constructing 'The Bourbon Room' to bring the show Rock of Ages back to Hollywood, it's the first time he's heard a song inside this space.

"So literally the night you guys are here -- perfect timing -- is the first time we're actually hearing the actors singing on stage with the band so I won't cry now, but I'm tearing up a little bit," Weaver said. "This is a cool moment."

Weaver is one of the original producers of Rock of Ages along with his wife Hillary and fellow producer Janet Billig Rich.

The musical's journey began 15 years ago at a bar just down the road.

It went on to run on Broadway for six years, garnering five Tony nominations.

The show has played all around the world, but nothing compares to bringing it back to its original roots on Hollywood Boulevard.

"So it's so awesome to be bringing the show home in our own immersive venue called, 'The Bourbon Room,'" Weaver said.

The Bourbon Room is named after the fictitious club at the center of the show -- a show that features a score of some of the great rock anthems of the 1980's.

"There's something about these power rock ballads and these metal jams that just gives you permission to like let your hair down," said the show's director, Kristin Hanggi. "Sing some Journey, and it takes you back to the memory of your first kiss or your prom night."

Hanggi earned a Tony nomination for directing the show and is part of the original Broadway creative team that's back together in Hollywood.

"When does a musical come out of Los Angeles? So to come back here feels really special and kind of sacred," said Hanggi.

The people behind Rock of Ages want you to feel like you've stepped back in time to a party in 1987. You're even encouraged to sing along as the show is taking place around you.

"Everyone is invited to bring their most rebellious and debaucherous self to this party," said Hanggi.

"Everyone is invited to bring their most rebellious and debaucherous self to this party," said Hanggi.

Not only are you immersed in the show, but the immersion begins two hours before.

Every night guests can visit the bar and dine in the Bourbon Room, and a team of actors bring the 1987 Sunset Strip to life.

"So you're going to go to Rock of Ages hopefully a couples of times," said Weaver. "But we want you to come back to the Bourbon Room five, six, seven, eight, nine times throughout the year, so that's why it was important to create an experience just here in the bar in the Bourbon Room."

A new place to rock out, hang out, and live out your nostalgic 80's dreams . . . right on Hollywood Boulevard.

Content created and supplied by: Avison (via Opera News )