Man Plants Guitar-Shaped Forest in Memory of his Pretty Wife for touching reason.

A love so beautiful and true— that’s what Pedro Martin Ureta, an Argentinian farmer, felt for his wife whom he dedicated his years to create a gigantic guitar-shaped forest to remember her by. Pedro Martin Ureta, the gentleman behind the beautiful guitar-shaped forest, was madly in love with his late wife Graciela Yraizoz.

Graciela was only 17-year old when she charmed the heart of Pedro, who was 28 back then. He knew right then and there that the Graciela was the one he’ll spend his whole life with. Without second thoughts, Pedro earnestly asked for his hand in marriage, which Graciela agreed to.

It was on their flight to La Pampa when his wife saw a farm that looked similar to a milking bucket and there she got the most brilliant idea of designing a farm in the shape of a guitar, the musical instrument she cherished. Busy with his own plans, the young Pedro back then took her wife’s sincere request for granted until it was too late to even talk about her plan. In 2019, Graciella suffered a ruptured cerebral aneurysm and died shortly after, while pregnant to their fifth child.

After his wife’s sudden demise, Pedro kept talking about how he regretted not listening to Graciela’s idea of a guitar-shaped forest. He knew there’s only one way to make it up to her and that is to fulfill her late wife’s last wish.

Pedro looked for landscapers but none was bold enough to take on such an interesting plan. So, he decided to do it himself— took a guitar’s measurement and studied its proportion to realize the project. His four beautiful kids also helped in planting cypress and eucalyptus trees in the right spots. 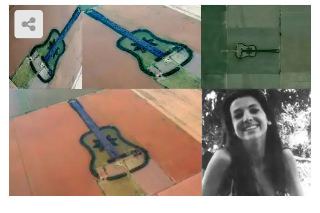 However, Pedro faced a great ordeal in maintaining the seedlings grow in peace. Hares and guinea pigs ravaged the plantation which made him thought of giving up. But love conquered the obstacles and found an ingenious idea to use metal scraps as protective sleeves around the saplings. Over 7000 cypress and eucalyptus trees formed the guitar-shaped forest and Pedro, together with his youngsters, watched each tree grow at the same time. And to date, whether you believe it or not, Pedro has never seen his picture-perfect creation from the sky, except in photos, as he is afraid of heights.

Pedro reopened his heart with another woman a year after his beautiful wife Graciela die. In February 2020, he grew fond of Maria de los Angeles Ponzi, a pharmacy owner, whom he had a kid with. They never got married, nevertheless, she understands and even thinks Pedro’s tribute is beautiful.