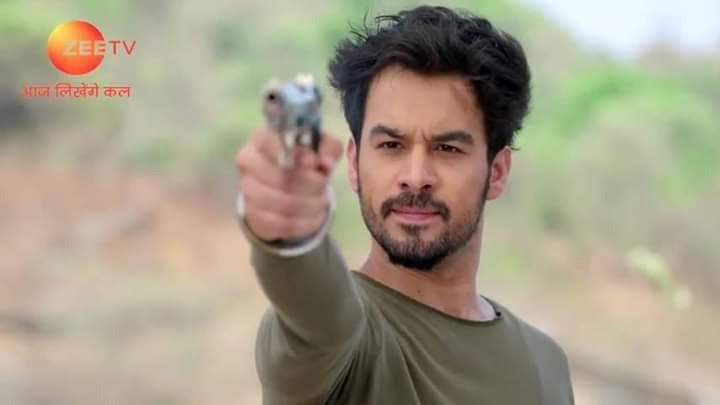 In the room, Vaidika was terrified as she watches the floral arrangements of a wedding room. She recalls the abuse she had to bear in her past life. Sahil comes to the room. Vaidika at once warns him to stay away, then stops at once. Sahil thinks what she must have bear that she is so afraid.

Vaidika says she only thought about her parent’s respect, didn’t consider the consequences of this relation. Sahil tells Vaidika that they are partners for various lives. He doesn’t need to get into a physical relation with her, their hearts are already connected and share a relation.

He allows Vaidika to set the limits in their relationship. Sahil decides to sleep in another room, while she can stay here. He takes his dress and goes outside. He then returns and asks Vaidika to at least be friends. She can at least trust him.

Vaidika allows Sahil to sleep in the room as his family might mind it. Sahil cheerfully comes in. Vaidika says she can trust Sahil, but she might never be able to love him. She was tied in a bad relation and she isn’t completely healed.

She apologizes for taking a huge decision of his life. She and her sister changed his life all together. He has a right of husband over her. Sahil says he would never do any such thing, he only wants to be her companion who would turn her life easy.

The spousal relationship is of trust, not about demanding rights. He asks her to sleep now. Vaidika lay down while Sahil sits on the couch watching her sleep. She covers her with a blanket and falls asleep on the couch.

The next morning, everyone comes to the hall when someone was singing Aarti early morning. Sahil joins Vaidika into the temple corner. Shashi and Rekha come outside and spot Deepak, Mina and Geet also in the temple corner. Sahil complements Vaidika’s aarti and her beautiful voice.

He says this aarti is what Rekha always does. It signifies God’s will. Rekha says Vaidika entered the temple corner without permission but this doesn’t mean she can enter their family; she can only be Sahil’s wife, not a daughter in law of the house. Rekha and Shashi take the aarti.

Mina leaves annoyed, however Deepak and Geet were welcoming to Vaidika. Geet teases Sahil for being flattered over his wife. She says its Pagphera of Vaidika today. Vaidika says she believes her parents won’t be ready to do it, her parents are annoyed. Sahil says she must go there. They are angry, but she isn’t. Deepak says when elders are at wrong, children shouldn’t repeat the mistakes.

Vaidika agrees to go, while Geet helps her in packing. Deepak tells Sahil that this girl took a huge step, he shouldn’t ever leave her side.

At Vaidika’s house, her parents stood upset. Her father says they were disgraced in the society. Vaidika arrives back home. Her mother was relieved to see her, she knew Kashab family would not accept her. Vaidika says she came for Pagphera ritual. Arju compels her mother not to be upset, and instead do aarti of her daughter.

She brings the thaal for aarti, but Vaidika’s parents both turn their face away. Arju asks why they aren’t happy for their elder daughter’s marriage. Prem Pratab asks if they should celebrate when their younger one is in tears. Vaidika says its alright, there isn’t any need for this ritual. Arju wish her niece get all the happiness in the world and does her aarti. Avantika comes there and says there won’t be any aarti.

She questions Vaidika why she came here. Vaidika wasn’t ready to hear anything, and says she can’t take any blames for what Avantika did. She left her wedding stage. Avantika says she told Vaidika she would return. Vaidika was jealous that she was getting someone like Sahil, she wanted to have fun with Sahil and betrayed her. Vaidika slaps Avantika.

Vaidika tells the family that Avantika was about to run with her boyfriend after marrying Sahil, with all the cash and jewelry. This was her plan to disgrace them, and she couldn’t watch them bear any disrespect in the society. Arju tells her brother and sister in law that this is how Vaidika saved them, Avantika must have flown with her boyfriend and this must have ruined their family name.

Vaidika cries that she bear seven years of harassment in her marriage, only then she gathered courage to break her marriage even them no one stood with her. But what about Avantika’s intentions. Sahil forced this marriage by holding her hand yesterday, and stands with her in both houses. If they want her to leave Sahil and let Avantika marry him.

Wouldn’t this all bring any disgrace for the family? Avantika shouts that this is a lie, Vaidika was jealous of her luck only. She tells Vaidika to leave this house as this house now belongs to her. She pushes Vaidika. Arju stops Avantika from any misbehavior. Avantika boasts that her parents are on her side, they realize this time Vaidika is wrong. She pushes Vaidika who fell over Sahil.

Avantika now insults Sahil but Vaidika doesn’t let him argue. She says Avantika wasn’t about to live with Sahil, still she feels bad. Avantika replies that was her matter, had she lived with Sahil or left him; who was Vaidika to interfere in her marriage.

She mocks Vaidika was no one to give any suggestions of marriage to her. Sahil now intervenes and tells Avantika not to be as jealous as to get blackened. She shouldn’t insult his wife again, else he would not bear it again. They turn to leave.

Vaidika was walking across the market, Sahil brings ice cream for both of them. He says ice cream vanishes one’s bad mood and tears. He says it’s not easy, but he came over to tell her he is with her. He enjoys the ice cream and it touches his nose as well. Manjolika was happy to see them, and bless them.

Sahil says she claimed that they were husband and wife in their past life. Manjolika says she made this marriage possible, and had locked her sister in the room with the boy. Vaidika confirms if Avantika could have reached the Mandap.

Manjolika says there couldn’t have been another mismatched marriage, and Avantika must have betrayed her. Meanwhile Vaidika loses her balance and her foot was twisted. Sahil forcefully carries her into his arms.

At Kashab’s house, Sahil calls Geet to bring first aid. A man sat there playing with a knife. He was the old husband of Vaidika. The man holds Vaidika’s arm and forbids Sahil to touch his wife. Vaidika backs up as he tries to see the twisted foot.

He says there are problems between husband and wife but she left the house over a petty matter. He asks Vaidika to tell the family their divorce didn’t finalize. Vaidika hides behind Sahil. Vaidika says her and Tanuj’s divorce took place a year ago. Tanuj asks Shashi that being a judge he must know it’s a crime to marry an already married woman, their divorce never took place.

Tanuj says his wife is extremely moody and leaves home over petty matters. She was and will always be his wife. Vaidika sent him divorce papers but he never signed them, and legally they aren’t divorced. Sahil’s family believes Tanuj.

He asks Vaidika to come home. Sahil holds him away from Vaidika and shouts that Tanuj can’t forcefully take his wife. No matter the divorce took place or not, Vaidika is his wife.

Tanuj physically harass Vaidika, and pulls his belt to beat her. She holds it in midair and says she has had enough of his abuses. They both know they are divorced. She will find any proof. Sahil is her husband and will surely come to her help. Tanuj beats Vaidika.

Sahil comes to Vaidika’s parents and says Vaidika’s ex-husband came over, her life is in danger. Avantika says he won’t get the address. But Vaidika’s father gives the address to Sahil. Sahil reaches Tanuj’s house but there was no one inside. Some ladies around gather there. One of them say Tanuj took Vaidika into the auto to old factory.

In a godown, Tanuj had tied Vaidika over a chair. He was furious that Vaidika left her home and husband and took a divorce from him, now the world must see what happens to her. He spills kerosene over her.

He says Vaidika selected a young man over him, now she must die in suffering. He throws a matchstick over the oil and locks the door of godown. Sahil reaches there and struggles the door of the godown.

Vaidika was suffocating while the fire had spread. Sahil jumps into the fire and saves Vaidika. The media and some neighbors were already there, filming the scene. Vaidika hugged Sahil.

Sahil shuts the media’s questions, and speaks that this fire was put on by ex-husband of Vaidika Tanuj Malhotra who harassed and abused her for seven years. She divorced him, and now is married to Sahil Kashab. He announces a 20 lac gift prize to bring Tanuj Malhotra to him.