By Iam_casvil (self media writer) | 4 months ago

According to one of the most popular blogs in Nigeria known as LindaIkejiblogofficial, Tega revealed what exactly happened between her and Boma in an interview with the on-air-personality(OAP) in charge of the program on Pulse TV titled, 'Pulse One on One'. 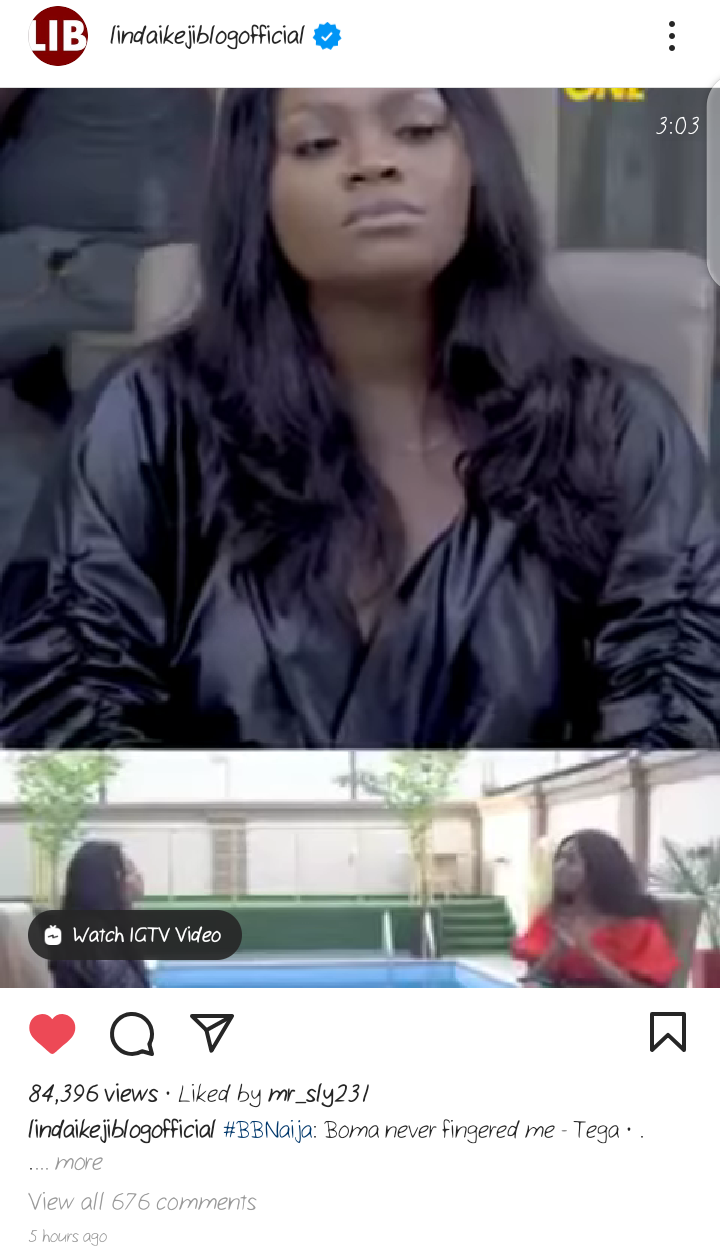 Recall that, Boma was dragged heavily by viewers of the Big Brother Naija Season 6 'Shine Ya Eye' 2021 edition, for locking lips with Tega, who is a married woman, in the executive lounge during the fifth week of the show. After the duo was evicted on Sunday alongside Peace and Michael, they have taken their time to apologize to the public and to Tega's husband, Ajmoney, concerning their duvet 'situation'.

Even though, all is well in Tega's home as she has finally reconciled with her husband, it doesn't change the fact that, her amorous relationship with Boma is one of her major content in the show and the first question she is being asked at her media rounds.

In her media rounds with Pulse One on One, Tega was asked by the OAP, what exactly happened between Boma and her in the executive lounge. Tega replied by saying that, she saw the video and from the camera angle, people had the wrong perception of what truly happened between her and Boma. 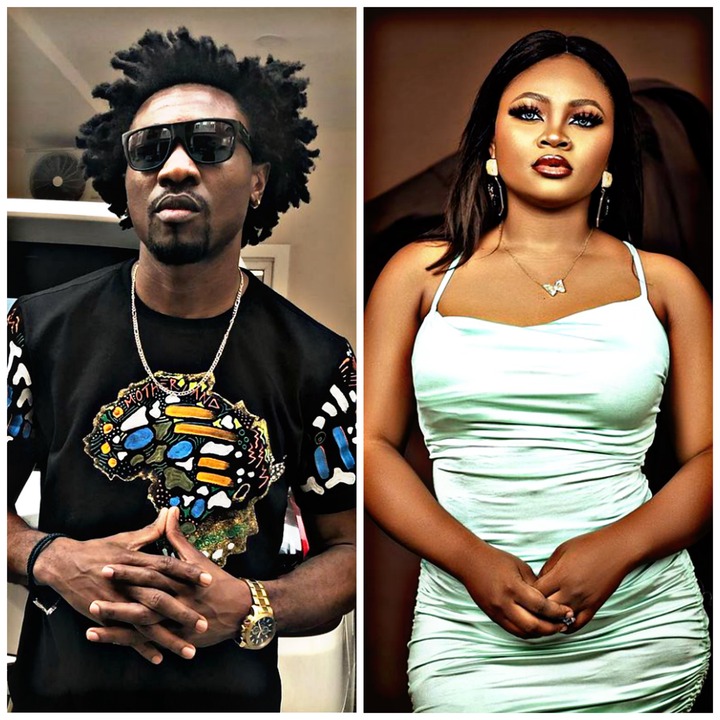 She also revealed that, "The tissue Boma took when we locked lips in the house was for his sinuses". She didn't stop there, she went further to say that, she only locked lips with Boma and she did it to make the show more lively. Tega's interview with Pulse One On One caused a serious explosion on social media as many people were reacting to it. Some were asking her the reason why she tendered a public apology if she only locked lips with Boma while some said that, Tega should focus more on mending her marriage than trying to be defensive about a past event. Some went as far as saying that, they are waiting patiently for the reunion to know the truth.

Below is some of the reactions: 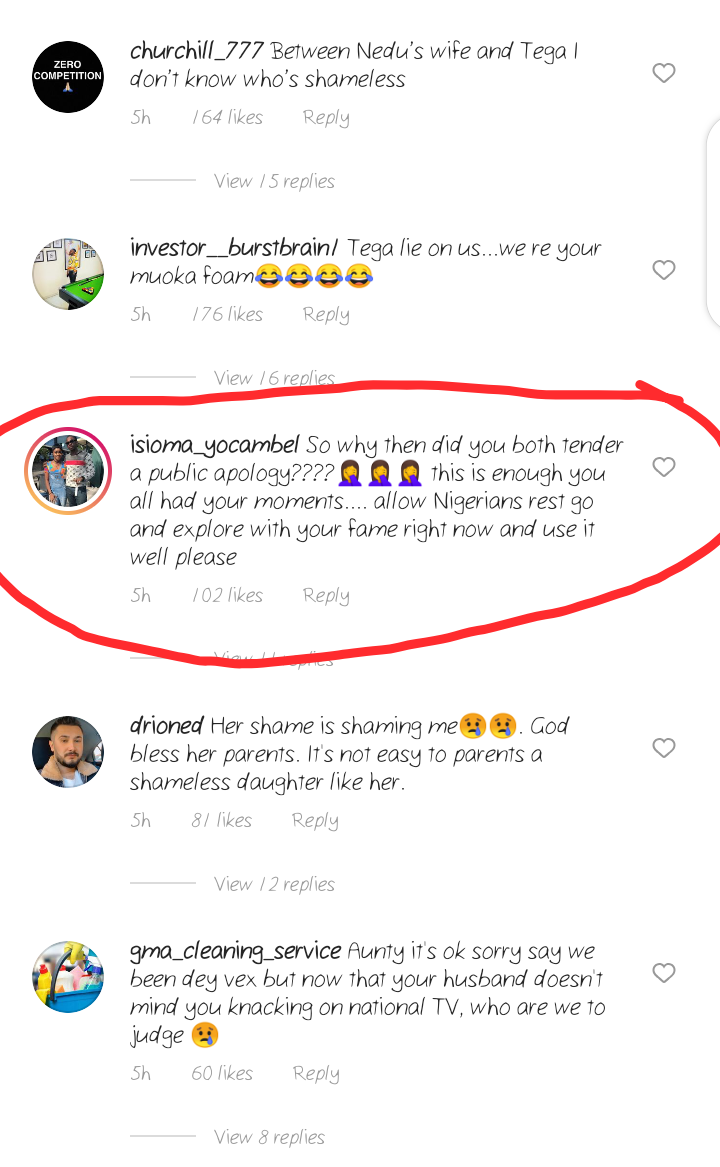 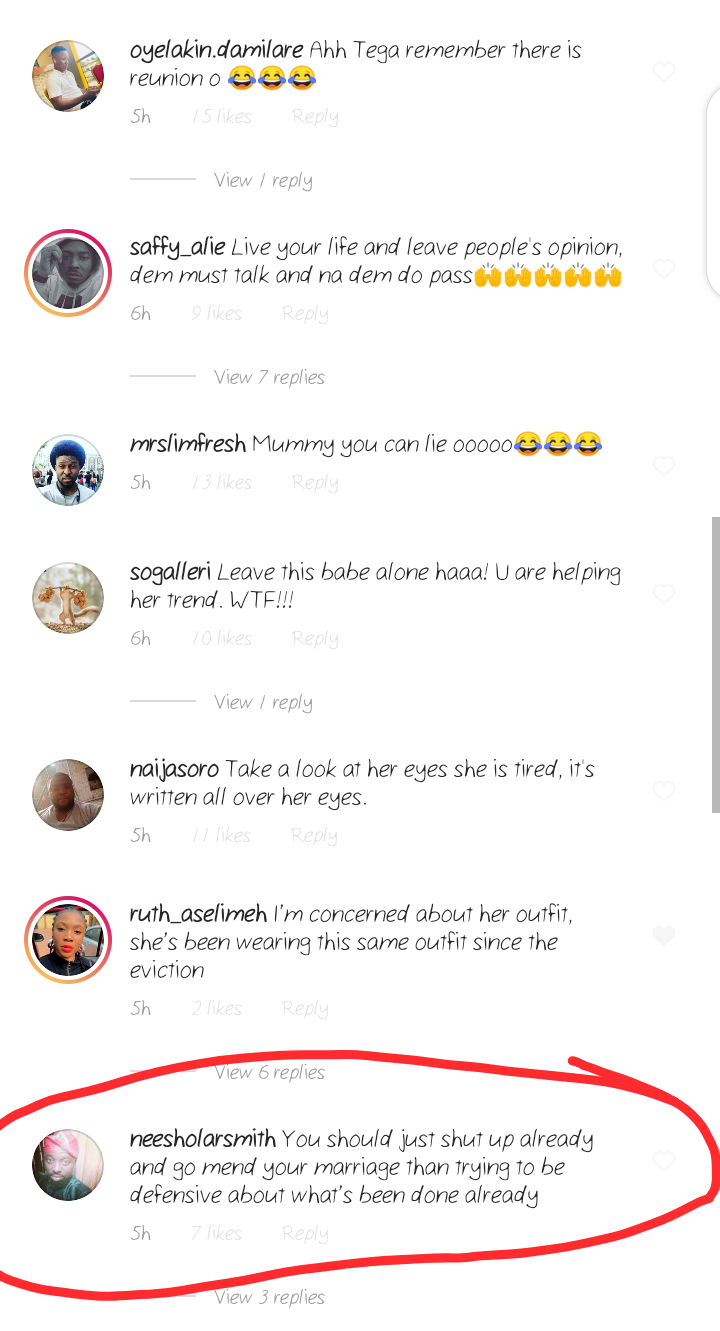 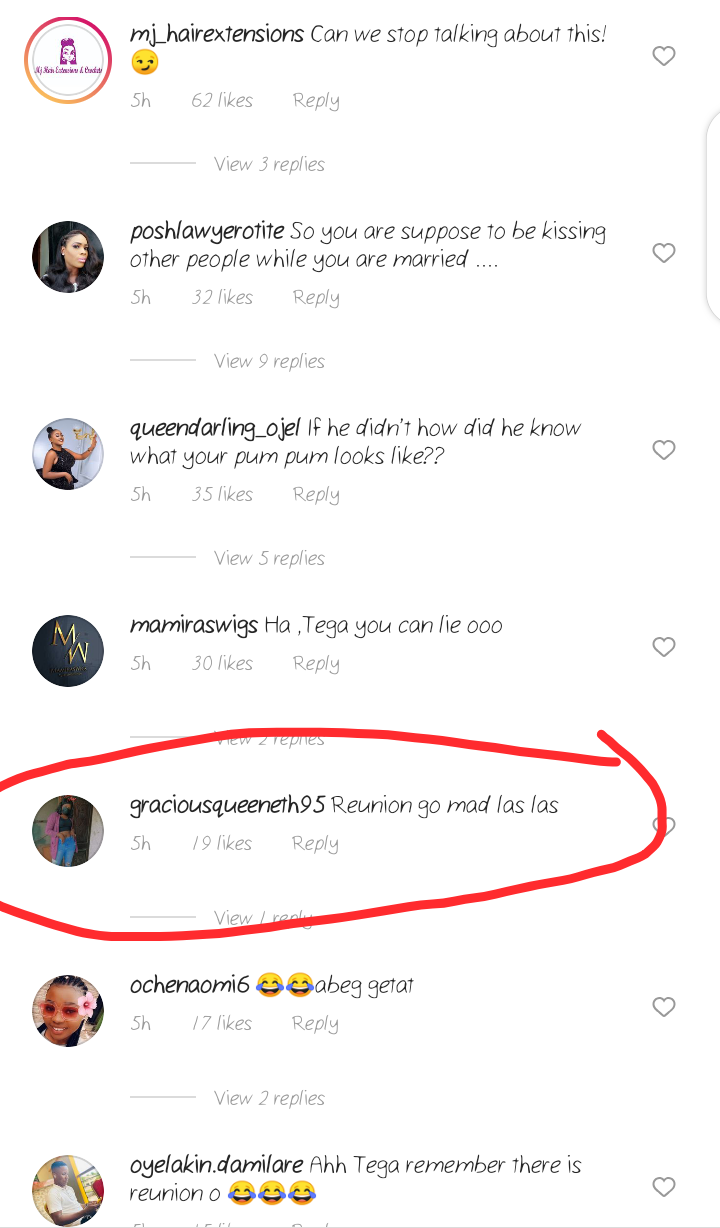 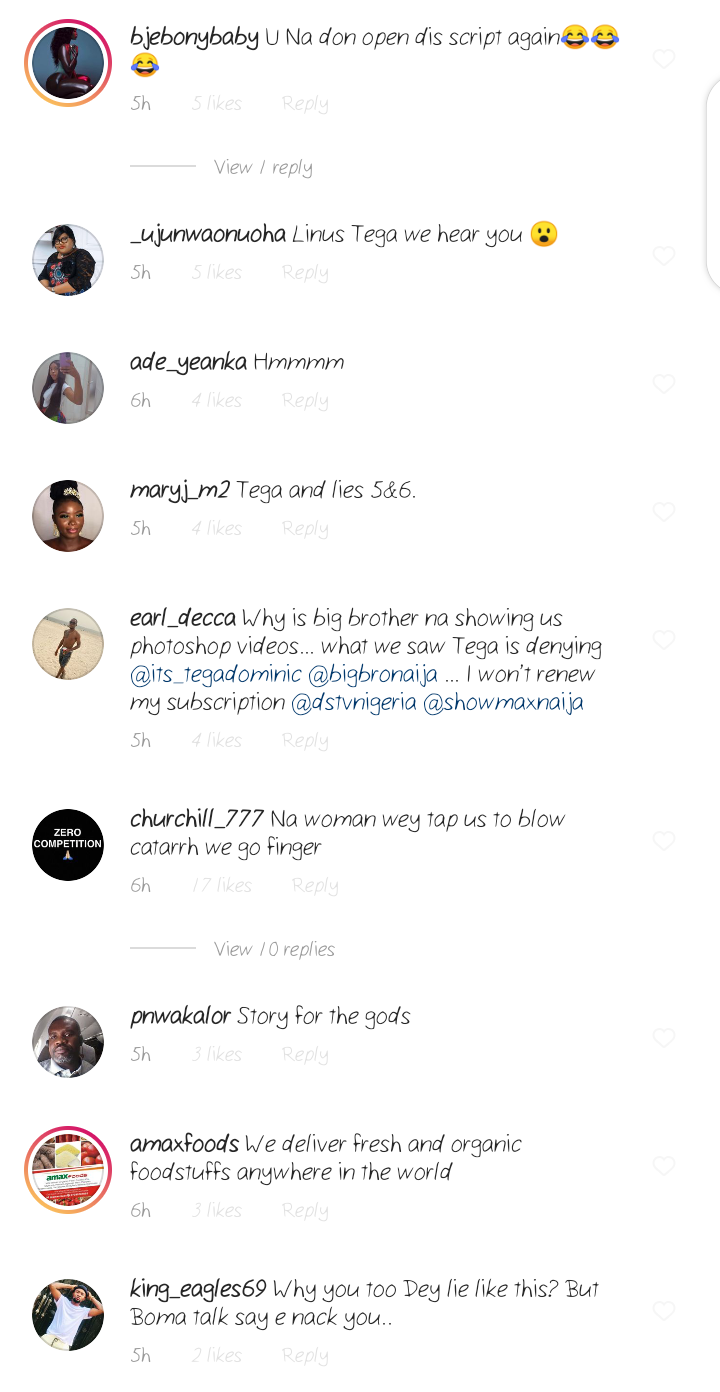 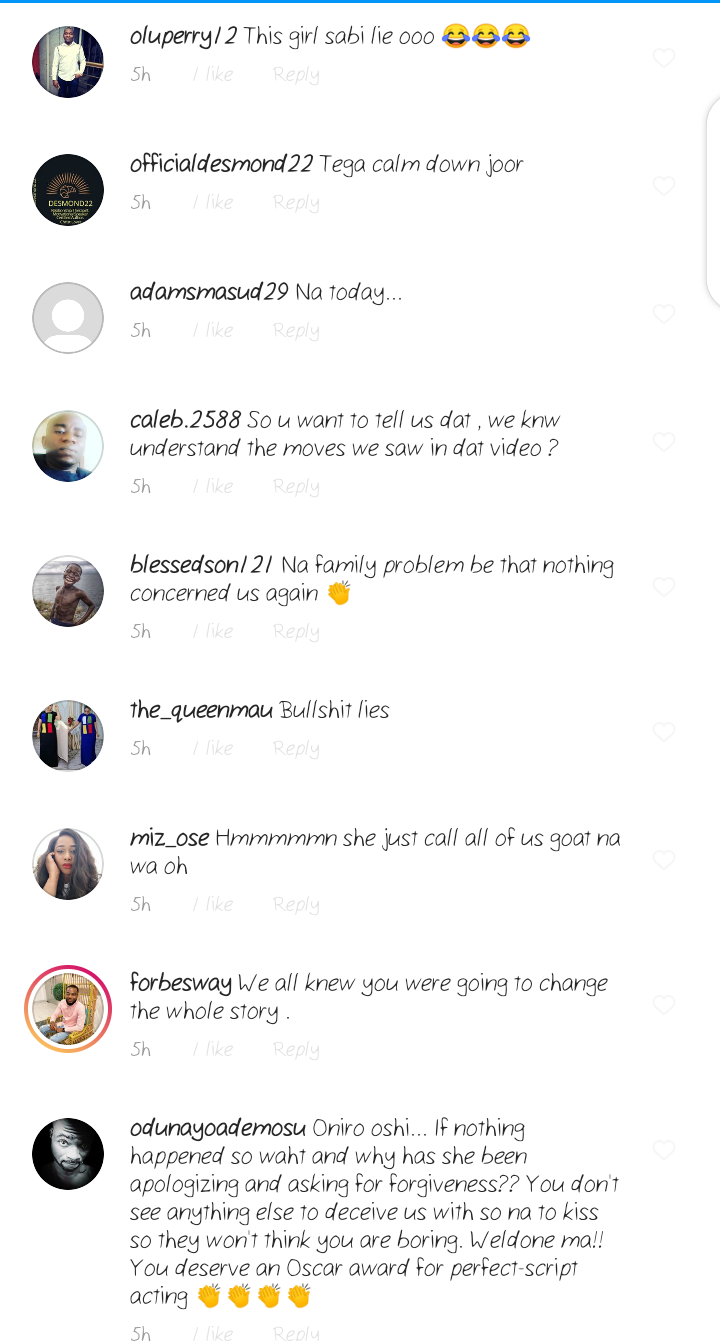 Tega has initially said that, she and Boma as acting a script during the first day of her media rounds and now, she is saying that, nothing happened between her and Boma, which one do you think is the truth?